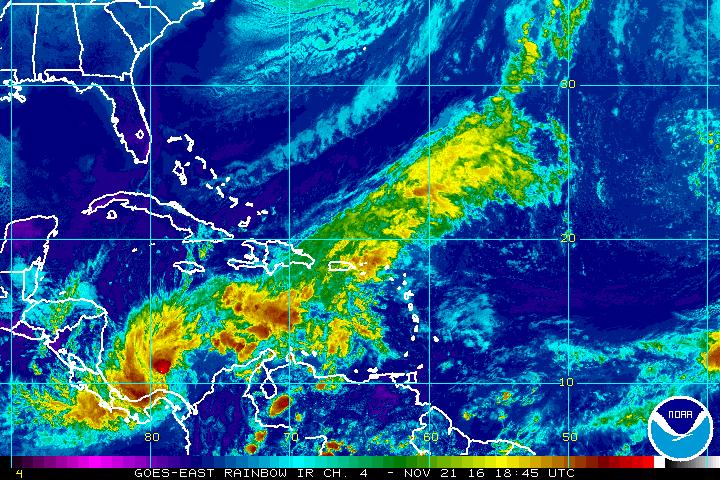 Tropical Depression 16 formed early this morning (Monday, Nov. 21) in the southwest section of the Caribbean Sea. By midday, it had intensified enough to be named Tropical Storm Otto.

No U.S. threat: The good news for the United States and Caribbean islands is that Otto is due east of Nicaragua and is expected to track west over the next few days.

The bad news for Nicaragua and residents of Honduras, Costa Rica, San Salvador and possibly Guatemala and Panama is that they could eventually feel the storm's effects.

The worse news for Central America is that Otto is expected to strengthen to hurricane level by Thanksgiving.

Such late season storms are why the official hurricane season was pushed to the end of November. But they are rare.

Busy 2016 hurricane season: 2016's tropical weather pattern, however, has been a doozy.

Then the first real tropical system, Bonnie, developed just days before the official June 1 start of the season.

So we really shouldn't be too surprised that we got the 15th named system as we near the end of the 2016 season.

That makes this year the most active as far as named storms go since 2012.

At least we're still far, far behind the devastating 2005 tropical season, which brought us four Category 5 hurricanes (including the deadly Katrina and Rita) and which didn't officially end until the next year with the final advisory for Tropical Storm Zeta on Jan. 6, 2006.

Always be storm and tax ready: The terrible lesson of 2005 and this still-active 2016 hurricane season is that dangerous weather happens when it happens.

All we can do is be ready, regardless of whether the threat is from tropical systems or tornadoes or violent thunderstorms or flooding or wildfires or extreme winter weather.

Yes, this is where I tell you that if you're the target of a damaging natural disaster, you can get some special tax help.

And yes, this is where I also tell you to be prepared whatever the season.

You can find more on tax treatment and recovery assistance if you're ever a storm victim, as well as ways to prepare for any and all bad weather, at the ol' blog's special Natural Disasters Resources page.

Finally, let me get a bit sentimental.

As you are with your friends and family this Thanksgiving, give every person an extra hug.

And hold some good thoughts for those folks in Central America and storm-ravaged areas in the United States and worldwide who might not be so thankful this year.