President Trump and your taxes

With Donald J. Trump's presidential win, Republicans will be in control of the White House, House and Senate.

Get ready for changes to your taxes. 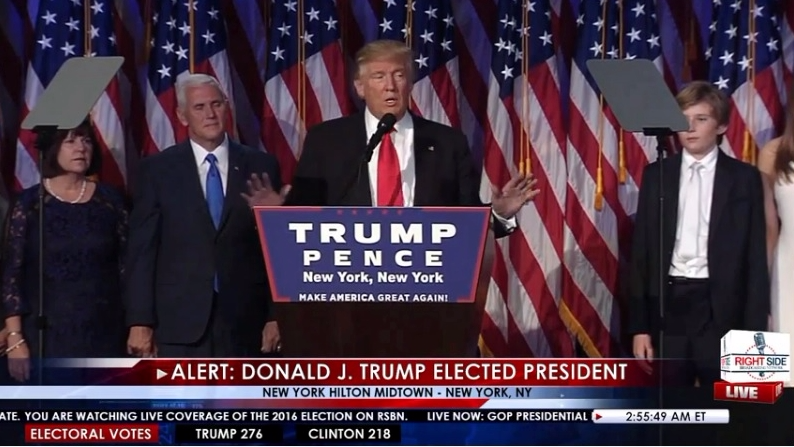 President-elect Donald Trump makes his victory speech early Nov. 9. He is joined on stage by, at right, his youngest son Barron, whose mom Melania is just out the frame, and at left VP-elect Mike Pence and his wife Karen. (Screenshot of Right Side Broadcasting YouTube video)

Here are some highlights of how your taxes might change in the near future.

Huge cost of first plan: After Trump's first tax plan was roundly criticized by even many in his own party as being too costly (the initial estimate was a $9 trillion budget deficit over 10 years), he revised it, essentially incorporating the House GOP proposal.

The changes made back in August cut the expenditures to around $6 trillion over a decade. Some calculations slash it even more, to just $3 trillion when dynamic scoring, which takes into account assumed economic growth, is uses.

Part of the savings came from bumping up taxes a bit.

How long will those rates hold?

How quickly can the Trump Administration, with guidance from House Speaker Paul Ryan (R-Wisc.), a former House Ways and Means Committee chairman, get its proposed revamp of just three rates and income brackets through that chamber and to the Senate for approval?

No, I didn't forget the head of household filing status. Trump's plan will eliminate it, along with the Alternative Minimum Tax and the federal estate tax.

And while Trump's original 0 percent rate is now gone, he promises that other provisions will mean that low-income Americans will have an effective income tax rate of nada nil.

Other tax tweaks: The wealthiest taxpayers will get another tax break in addition to the almost 7 percent ordinary income tax rate cut. With the promised repeal of the Affordable Care Act, or Obamacare, now a certainty, the health care law's additional 3.8 percent surtax on net investment income also will be gone.

Capital gains taxes will remain, says Trump, at the existing rates. That means meaning no tax for those in the lowest bracket, 15 percent for filers in the 25 percent bracket and a top 20 percent capital gains levy on folks in the highest income bracket.

Deduction revisions: As for deductions, Trump wants to increase the standard deduction for single taxpayers to $15,000; double that for joint filers. For the coming 2017 tax year, those amounts are $6,350 and $12,700, respectively.

In addition to hiking the standard deductions, personal exemptions will be discontinued, which are $4,050 for each taxpayer and his/her spouse and dependents on 2016 and 2017 returns.

Itemized deductions will remain, as will limits on those amounts. While current law calls for a phase-out once you make a certain amount for your filing status, Trump's plan will cap itemized deductions at $200,000 for married joint filers or $100,000 for single taxpayers.

Lots of lower income families lose: With all these changes, who will be the big winners? And losers?

The Tax Policy Center's analysis says that while almost all taxpayers will see some savings, nearly 47 percent of Trump's tax cuts will go to the richest 1 percent.

And because the Trump plan gets rid of some deductions that large families currently tend to rely on, studies have suggested his plan could end up raising taxes on millions of families.

New York University law professor Lily Batchelder, in a report published Oct. 28, says that Trump's plan would significantly raise taxes for millions of low- and middle-income families with children. The tax increases, according to Batchelder's analysis, would be especially large for working single parents.

Trump’s tax plan would affect about one-fifth of families with minor children and about half of all single parents, Batchelder says in the paper published by the Tax Policy Center. That means, she writes, as many as 8.7 million families with school-age children could actually see a tax hike under the proposal.

Businesses go first: Then there are businesses taxes. That section of the Internal Revenue Code is likely to be addressed first since the relocation of U.S. multinational corporation to foreign headquarters was a major topic during those few times when policy was discussed during the campaign.

Trump argued that the solution to the business headquarters' relocation issue, known as inversions, is to make huge cuts to the business tax rate, from 35 percent to 15 percent.

Companies also would be able to immediately deduct the cost of assets they purchase, rather than being forced to depreciate those costs over a number of years.

Pass-throughs on tap, too: Trump also proposed changing the treatment of what are known as pass through entities, but exactly how is unclear.

Currently, businesses that operate as S corporations and partnerships allocate, or pass through, income to the owners, who then pay tax at their individual tax rates on their personal tax returns. Many of Trump's own businesses are set up this way.

These so-called pass-through entities under on version of Trump's tax plan would pay the 15 percent business tax rate. Trump's unified business rate also would apply to sole-proprietors who file Schedule C with their 1040s.

So the business tax rate for all companies of all sizes would drop from a possible 39.6 percent under current law to 15 percent, regardless of what the owner's individual tax rate is.

Tax reform or another loophole? After this provision was added, questions and criticism of this apparent new loophole arose.

In addition to noting how Trump would benefit personally, others also pointed to the possibility probability that a lot of high wage earners would quit and then sign on with their companies as self-employed freelancers to get the 15 percent tax rate.

That prompted the Trump tax advisers to remove all references to pass-through taxation from the campaign's website, noting simply that, "The Trump plan will lower the corporate tax rate from 35 percent to 15 percent, and eliminate the corporate alternative minimum tax."

Some GOP hurdles to clear: Now that Trump is officially America's 45th president, his tax advisers will start working in earnest on the legislative specifics.

But even with Republicans in control of Congress and the White House come January 2017, Trump's tax plan still faces some hurdles.

Many in the GOP remain worried about the deficit, which Trump's tax plan would, as noted earlier, add significantly to what Uncle Sam owes. Will the tax cutting faction override the Party's deficit hawks?

For argument's and this post's sake, let's assume tax cuts get the go ahead early in the Trump Administration.

Although it probably will be relatively easy to push the changes through the GOP Congress, 2017 still is likely to be a transition year. I'd count on the tax code staying as is for the first year of Trump's administration.

But by this time next year, get ready for the new Trump tax system's effects.