Thanksgiving is Thanksgiving, whether you're at home with family and friends or are 249 miles above Earth on the International Space Station. 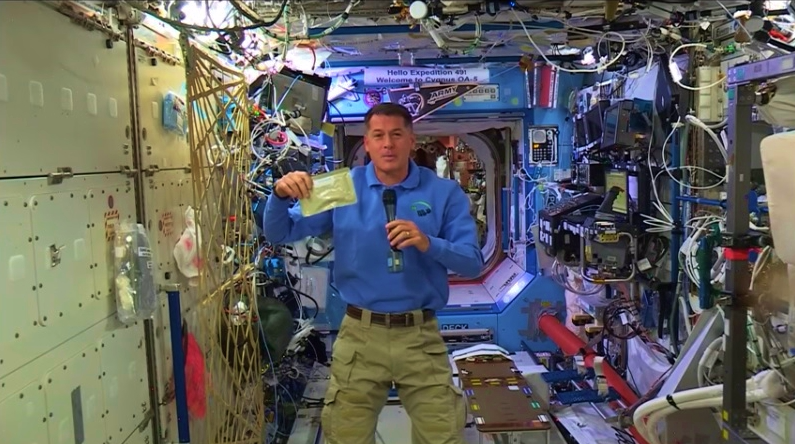 Astronaut Shane Kimbrough shares what he and his colleagues will be eating aboard the International Space Station this Thanksgiving Day. Click image to watch the full NASA video on YouTube.

Astronauts aboard the ISS will enjoy each other's company over a specially packaged turkey dinner with all the trimmings and NFL football.

"It's going to be little bit different for us up here in space, but I'm going to try to make it as much like home as we can," said National Aeronautics and Space Administration (NASA) Expedition 50 Commander Shane Kimbrough, in a video taped in orbit of how he and the rest of the International Space Station (ISS) crew will celebrate Thanksgiving today.

In-flight Turkey Day feast: The details of this special day for Americans will come over a traditional dinner of turkey, candied yams, cornbread dressing, green beans and mushrooms, mashed potatoes and cherry-blueberry cobbler, washed down with some sweet tea with lemon drink mix (not Tang).

"Of course Thanksgiving, in my world, is not complete without some football," said Kimbrough. "So we’re going to have mission control send up some live football games for us to watch to complete the experience of Thanksgiving."

New direction for NASA? This Thanksgiving week as the ISS crew has been working in space, the incoming 45th president of the United States has been focused on down-to-earth issues like naming cabinet members.

We're still awaiting word on who president-elect Donald Trump wants to head NASA while he's in the White House. But we do know that Trump likely will ask that person to make some mission changes.

The Obama Administration's fiscal year 2017 budget request for NASA was $19 billion, essentially the same amount Congress approved for the space agency in fiscal 2016.

NASA's tax dollars today: Almost $2 billion of those 2017 tax dollars is designated for NASA climate-related research, both here on the blue planet and in space.

NASA manages what many scientists consider to be one of the gold standard global temperature records. Agency researchers also model the climate and monitor the ice sheets at both poles for possible signs of melt, which could pose problems for coastal cities.

NASA satellites also monitor carbon dioxide, precipitation, storms, sea levels, land cover change and even gravity shifts at the poles due to melting in ice. These satellites provide a baseline that can measure future climate change against it and also provide crucial information for storm monitoring and weather forecasting.

In total, NASA says it has 17 space missions collecting climate data. Those expeditions, however, could be in danger.

Changes likely to NASA climate change studies: During the presidential campaign, Trump said he wants NASA to refocus on space exploration instead of climate change research.

The president-elect himself has previously called climate change a hoax perpetrated by the Chinese, although on Tuesday, Nov. 22, during an interview with New York Times reporters and editors, Trump said there is "some connectivity" between human actions and the climate.

Still, this week senior Trump campaign adviser Bob Walker also told The Guardian that there was no need for NASA to do what Walker has previously described as "politically correct environmental monitoring."

"We see NASA in an exploration role, in deep space research," Walker told the British newspaper. "Earth-centric science is better placed at other agencies where it is their prime mission."

NASA key to climate research: Some scientists, however, disagree.

"Without the support of NASA, not only the U.S. but the entire world would be taking a hard hit when it comes to understanding the behavior of our climate and the threats posed by human-caused climate change," Michael Mann, a climate scientist at Penn State University, told The Guardian.

This Thanksgiving, though, Kimbrough and his ISS colleagues are not thinking about future budgets and possible mission realignments. They'll be going about their regular work in orbit and then sitting down, as much as possible in the gravity-free station, to a traditional Turkey Day dinner.

And all of us here on terra firma should be thankful for the work of the men and women of this and all past and future ISS crews.