Finally the weekend! It's what, as the song says, we've been working for.

Some folks, however, are spending today looking for a job. 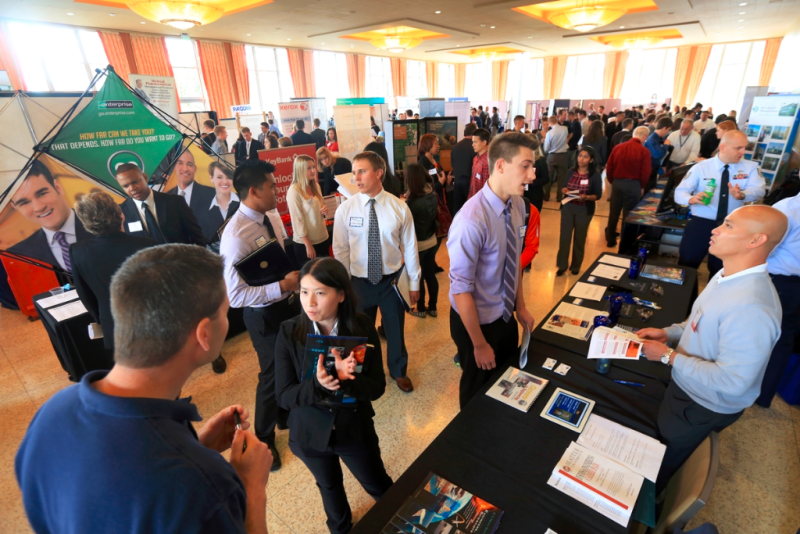 Job fairs are good places to get, if not a job, at least an idea of what's available in the marketplace. (Photo courtesy iLearn Schools Job Fair 2016/NJASCS.org)

Good jobs report: On Friday, Nov. 4, the Bureau of Labor Statistics released its last jobs report before the presidential election. It showed 161,000 jobs were added in October, as well as a hike of 10 cents in the hourly pay rate.

The number of jobs was less that economists had expected (they were predicting 175,000). However, the average pay of $25.92 an hour is the strongest annual growth in wages since the 2008 recession.

The bottom line is that the national unemployment rate dipped to 4.9 percent. That means a tighter job market, but there's a brighter employment light in seasonal jobs.

Seasonal job prospects: Lots of folks look for seasonal work this time of year, either to help cover their daily expenses or to pocket some extra holiday cash.

The human resources and payroll company ADP reports that businesses added 147,000 jobs last month. That number should be picking up about now.

Seasonal job tax issues: If you snag one of these positions, congrats! But -- and this is the week's belated tax tip (sorry, as my "finally the weekend" comment earlier indicates, it was crazy Monday through Friday!) -- make sure you understand the employment arrangement.

If you're hired as a contractor instead of as an employee, you'll have more tax responsibilities, primarily paying estimated income and self-employment taxes.

Also keep track of your job search expenses. Those could be tax deductible if you itemize.

Wanna be a T-man? One place that's hiring, at least in my neck of the woods, is the Internal Revenue Service.

The postcard pictured below was in my snail mail box last week. 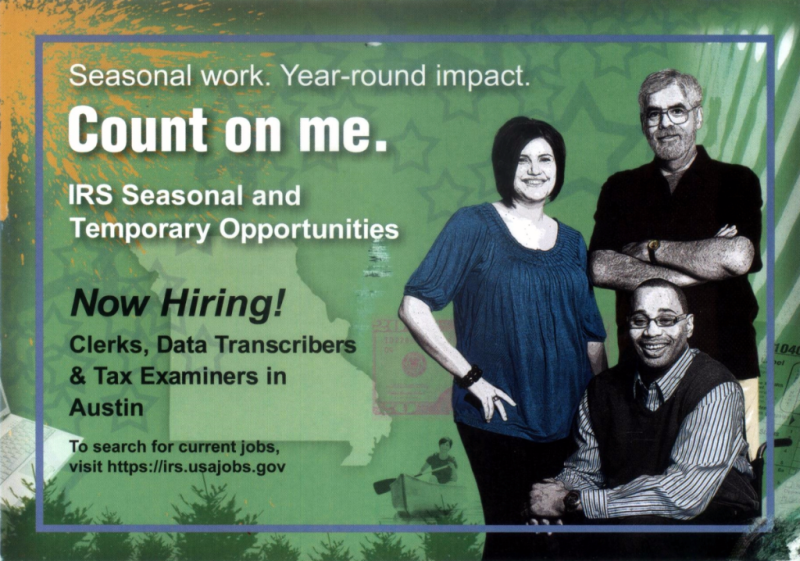 The IRS is looking for temporary help in Austin and possibly your area, too. You can check out openings at IRS.usajobs.gov.

And no, it wasn't directed just to me. It was addressed to Austin "Resident," although that's a map of Missouri underneath the text. Kudos to the IRS (for real, no sarcasm) for using the materials on hand instead of spending to make geographically specific mailers.

It's not the first time Uncle Sam's tax collector has been looking for Austin area seasonal workers. They also come calling mailing in the spring in advance of the annual filing season work crunch.  And I'm sure these solicitations have been delivered to other parts of the country.

These are short-term jobs, not permanent positions that the IRS found money to fill back in May.

But if you're looking for some short-term income, there are worse places to work than the IRS. Really.

And wherever you're looking for work, I hope you find just what you want for as long as you want.