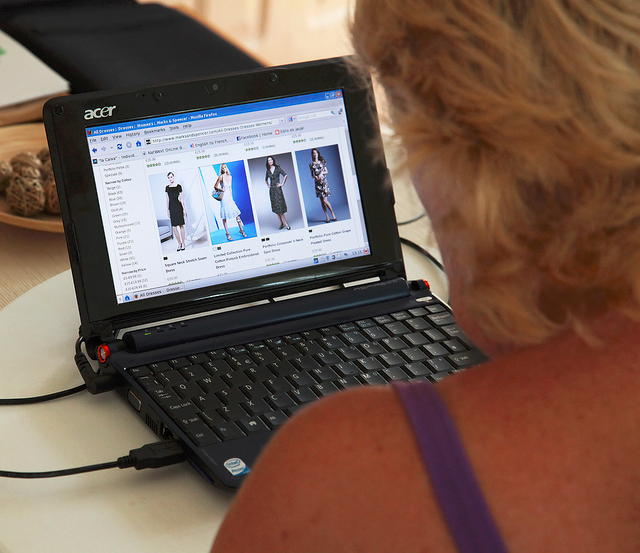 Thanks for taking a break from your online shopping to visit the ol' blog this Cyber Monday. (Photo by Keith Williamson via Flickr Creative Commons)

In fact, many of you e-commerce devotees got a head start on buying and remitting sales taxes on Black Friday.

Record-breaking online purchases: Shoppers shelled out $5.27 billion in online purchases between Thanksgiving and the end of Black Friday, according to Adobe, which uses a proprietary predictive model to forecast online sales and trends.

In fact, the amount spent the day after Thanksgiving alone this year was up almost 18 percent from the prior Black Friday figures. And that means that Black Friday 2016 set a new record by surpassing the three-billion-dollar mark for the first time at $3.34 billion.

Last Friday also became the first day in retail history to drive more than a billion dollars in mobile revenue at $1.2 billion, a 33 percent growth year-over-year.

Cyber Monday 2016 got off to a good start for online retailers, with Adobe reporting that its early data indicate that shoppers between midnight and 10 a.m. Eastern Time today have already spent $540 million.

Federal tax collection legislation pros/cons: When brick-and-mortar stores started pushing years ago for federal legislation to make it easier (and mandatory) for online retailers to collect state and local sales taxes from cyber shoppers, the tax battle lines were drawn.

Main street retailers said it would level the playing field since they much collect sales tax from their in-person shoppers. State tax departments joined the physical stores' side, citing the millions in tax revenue lost annually to e-commerce.

E-tailers countered that the tax collection process would cripple their sales, along with complicating their e-commerce business models.

It looks like the online shopping tax concerns were unfounded.

Amazon acts on its own: Based on the actions of Amazon, the largest online retailer, state sales tax collecting has become just part of the transaction. The internet giant now collects sales tax on products sent to buyers in 29 states and the District of Columbia.

Here are the places where Amazon now collects sales tax from customers:

Real nexus means real taxes: The reason for the Amazon tax expansion is that it now has more actual locations, such as distributions centers, in the states where it's collecting taxes. This means it has the physical nexus required in Quill Corp. v. North Dakota., the 1992 U.S. Supreme Court decision that still determines the collection of tax by out-of-state sellers.

Although there was some hope by online sales-tax-collection advocates that Congress would this year finally enact some version of the Marketplace Fairness Act, that's not going to happen. While over the years there has been a growing consensus among Representatives and Senators that a unified sales tax collection framework is needed, there are at least three competing versions of how to do just that.

And lawmakers say that those differences won't be ironed out in this lame duck session of Congress.

But there is a greater possibility it could happen early in the coming 115th Congressional session that begins in January 2017.

State bills, lawsuits: The reason? Federal lawmakers are being spurred by state legislative efforts and lawsuits that seek to expand their e-commerce tax collection rights.

"There is an emergency in Congress because they see what states are doing," Neal Osten told the National Conference of State Legislatures' Executive Committee Task Force on State and Local Taxation meeting earlier this month, as reported by Tax Notes.

Osten, director of the NCSL's District of Columbia office, said Congress sees "the legislative activity that’s taken place this year in South Dakota, in Alabama, and that's percolating up to the leadership from their own members that we need to do something."

Since Osten's remarks, Wyoming also has joined the fray.

That state legislature's Joint Interim Committee on Revenue easily approved a proposed bill for the upcoming legislative session that would require an online retailer with no physical presence in Wyoming to collect and remit sales tax after the seller's gross revenue from in-state sales exceeds $100,000 or its number of in-state transactions reaches 200 or more.

Some of the state online tax collection bills that have passed are being challenged in court. Those legal decisions also could muddy the many tax jurisdiction waters or throw out Quill altogether.

State tax 'labs' are bad: Such state-by-state actions and the lack of federal legislation is hurting all stakeholders, Utah State Sen. Curtis Bramble said at the NCSL tax meeting.

"Each day another state comes along with legislation, [and] we're one day closer to cracking the Quill ceiling and having states back to being the laboratory of democracy," Bramble said, according to the Tax Notes' report.

Meanwhile, though, more and more shoppers are heading to their computers and digital devices to buy, with or without taxes included.

Just remember. If there's no tax on your e-bill and your state collects one, be sure to pay your use tax.