Donald Trump acknowledged during Sunday's second presidential debate that he had avoided paying federal income taxes for years thanks to a claim in 1995 of nearly $1 billion in business losses. 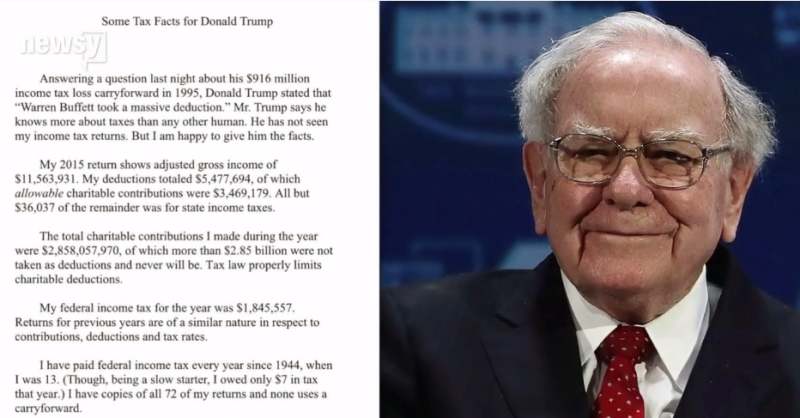 The Republican presidential nominee then pivoted from his 1040s, which we still haven't seen, to wealthy supporters of his Democratic opponent Hillary Clinton.

Duh! That's not unusual. Nor is it illegal. It's just a bit infuriating in many cases.

Then Trump, as he is wont, got personal.

"Many of her friends took bigger deductions," he said, falling back on claims he made earlier this month at an Arizona rally. "Warren Buffett took a massive deduction."

Not according to the Oracle of Omaha.

Buffett vs. Trump, round 2: Back in August, the 86-year-old billionaire challenged Trump to a tax return showdown. But in light of Trump's speculation during the town hall debate at Washington University in St. Louis, Missouri, Buffett decided not to wait for The Donald.

Buffett issued a press release Monday, Oct. 10, entitled "Some Tax Facts for Donald Trump," in which he says his adjusted gross income on his 2015 federal tax return was $11.6 million.

The chairman of Berkshire Hathaway and one of the world's richest men noted that he claimed deductions of $5.5 million last year. That included charitable donation write-offs of $3.5 million.

Actually, Buffett's itemized charitable deductions claimed for 2015 were just a small part of his philanthropy. He gave a total of almost $2.9 billion.

But because the tax code limits the amount of deductions a taxpayer can claim, Buffett was not able to use all of them on last year's filing.

"All but $36,037 of the remainder [entered on Schedule A] was for state income taxes," Buffett said. He's a Nebraska resident, which collected last year a top individual tax rate of 6.84 percent, plus an additional tax amount from wealthier Cornhusker State residents.

After his deductions, Buffett's Internal Revenue Service bill for 2015 came to $1.85 million. That amount, he said, was similar to previous filings.

Filing since a teenager: "I have paid federal income tax every year since 1944, when I was 13. (Though, being a slow starter, I owed only $7 in tax that year.)," Buffett added.

He also noted that he has copies of all 72 of his returns, none of which took advantage of a carryforward loss like apparently used by Trump to zero out his federal taxes for almost two decades.

As for audits, which Trump cites as the reason he won't reveal his tax returns, Buffet says he, too, has "been audited by the IRS multiple times and am currently being audited."

However, added Buffett, "I have no problem in releasing my tax information while under audit."