I helped my mom vote today. She's 82 and has some vision issues that make voting in person difficult, so we filled out her ballot and dropped it in the mail. 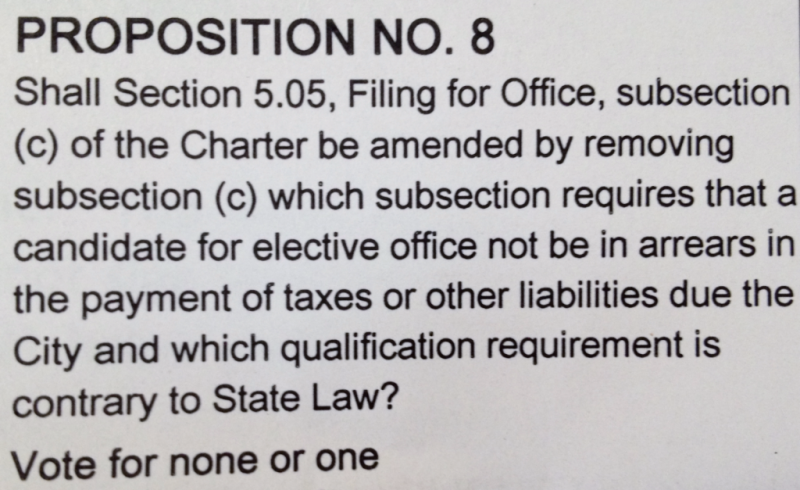 One of the local issues my mother had to vote on in this year's election.

I am, however, a bit disappointed that we had to pay the postage for the over-sized envelope. Yes, two stamps instead of one is not big deal in the grand scheme of being a cog in the wheel of democracy. But really, shouldn't governments do things to make voting easier, like postage paid envelopes? How much could that cost?

In addition to voting for U.S. president and her representative in Washington, D.C., my mom had to decide on some local offices to be filled and some ballot questions.

The one that caught my eye was #8, pictured at the top of this post. If you read it, you know why.

Tax debtors running for office: In this case, the ballot question calls for removal of part of the city charter that requires any candidate for elective office to be current on his or her taxes or other city liabilities.

Sounds pretty reasonable to me that you don't want tax delinquents running for positions of power even in a small Central Texas town.

But folks who support Proposition 8 say it's a good idea.

First of all, advocates of the measure say it and the other seven changes to the city charter would clean up and clarify city rules and make them consistent with state laws. This is needed, say officials, because the rules in my mom's small town are a bit more restrictive than state laws.

And yes, I just checked. Apparently the Lone Star State says, implicitly, that it's OK for tax delinquents to run for office.

Texas' web page that lists qualifications for office includes things like age, residency and professional requirements for some elective positions, but says nothing about owing taxes to any jurisdiction.

Let the voters decide: Of course, we might not want to vote for someone to be, say, a judge or country commissioner or tax assessor-collector if they aren't that careful about paying their own taxes.

But, supporters of striking the local tax compliance consideration say that's something that's better left to the voters.

If somebody owes, for example, property taxes, that's going to be on the public record in the county's appraisal district office. And it's probably a safe bet that a tax delinquent candidate's opponent(s) will make sure that the word gets out to the voting public.

So basically, a vote for Prop 8 in my mom's town is a vote for less city regulation of candidates and for more vigorous and potentially more mud-slinging campaigns.

Like after the 2016 presidential race we need any more, uh, nasty candidate confrontations!