It's one of my favorite times of the year. Major league sports seasons overlap. The National Football League season is underway (How 'bout them Cowboys?!). Major League Baseball teams are battling for the World Series crown. Pucks drop in National Hockey League arenas across Canada and the United States this week.

But the big sports news recently, at least from a tax perspective, is about the Olympics. 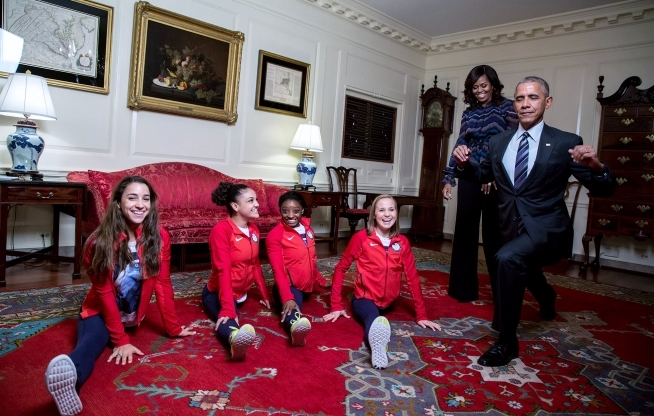 On Sept. 29, an apparently not-that-limber President Barack Obama, with First Lady Michelle Obama looking on, welcomed four of the United States' Women's Gymnastics team members -- left to right, Aly Raisman, Laurie Hernandez, Simone Biles, and Madison Kocian -- and other Olympians to the White House. That same day, the president signed into law a measure that offers a tax break for many Olympians and Paralympians. (Official White House Photo by Pete Souza)

Tax break finally granted Olympians: After years (mostly those when the international competitions were underway) of trying, U.S. House and Senate members finally agreed that the men and women who represent the United States at the Olympics and Paralympics deserve a tax break.

The newly-enacted United States Appreciation for Olympians and Paralympians Act exempts most American Olympic athletes from paying taxes on their medals and prize money.

The bill will apply to future summer and winter Olympics winners, as well as to many competitors who helped bring a passel of gold, silver and bronze medals back to the United States from the Rio Summer Games.

Patriotic, but poor, tax policy: Yes, specific tax legislation is not good policy. It's not efficient and it adds to the already bloated tax code.

But anyone who follows taxes knows that tax law isn't necessarily driven by a desire to enact good, long-term tax policy. Tax legislation too often is introduced and sometimes passed to:

That last consideration is part of the reason the Olympians' tax break finally made it into law.

This 2016 election year is a particularly nationalistic one that meshes easily with the "USA! USA! USA!" invoked by American who watched our athletes bring home 121 medals from this summer's event.

That comes to almost $2.1 million in prize money awarded to Rio winners.

Now, according to the Congressional Budget Office, the new law means the U.S. Treasury will lose around $300,000 per year.

Wealthy athletes need not apply: But not every athlete is getting a tax break. The final version of the law was revised so that the tax break won't apply to athletes who make an adjusted annual gross income of more than $1 million.

That means that Michael Phelps, some of his fellow swimmers and all the players on the U.S. men's basketball team still will pay tax on the values of their medals and the associated monetary winnings.

I suspect that Virginia Thrasher, the sharp-shooting teenager who won the United States' first gold medal handed out at the Rio Olympics, is not raking in the big bucks for her skill with an air rifle. The biomedical engineering major was back in class at West Virginia University before the games ended.

"Most of these athletes will never sign an endorsement deal or a professional contract, which is why it's so important that these athletes will no longer be forced to pay a big tax bill when they achieve their Olympic dreams representing the United States," said House bill sponsor Rep. Robert Dold (R-Illinois).

"Unlike most National Olympic Committees, the USOC and Team USA athletes do not receive federal funding and must rely on the generous support of the American public," added United States Olympic Committee CEO Scott Blackmun. "This legislation is incredibly meaningful to our athletes and will help defray some of the significant expenses they have incurred."

For the many Virginia Thrashers out there across the country, this tax law's for you.

I will show my lack of knowledge here, but don't we tax foreigner athletes on income they earn in the U.S.? I believe they even have to file income tax returns in the U.S. if the perform here and earn money here. How can we exempt our own citizens on foreign income, but charge foreigners on U.S. income? Seems like something is amiss here.