Forget all those disparate and confusing presidential election polls, online and more scientific.

The Washington Redskins have decided who will be moving into the White House next year and the team has chosen Hillary Clinton. 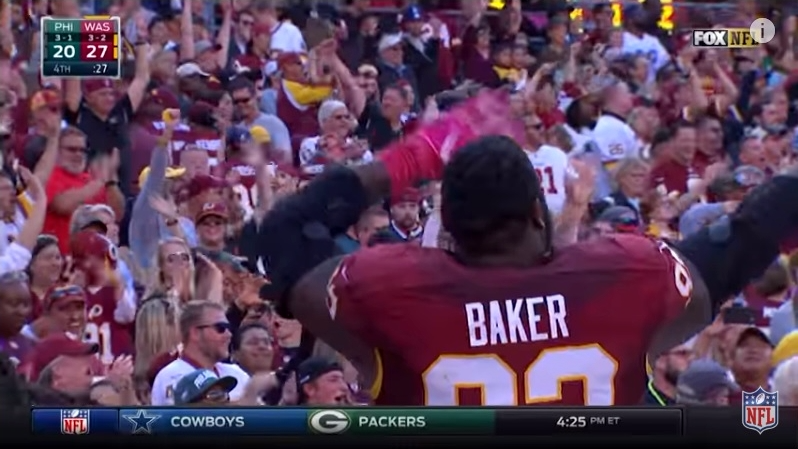 Washington Redskins defensive Chris Baker leads fans at FedExField in celebrating the home team's 27-20 win over the Philadelphia Eagles on Sunday, Oct. 16. Click image to watch the full NFL game highlights package on YouTube. (And yes, I selected this screenshot because it promos the Dallas Cowboys game!)

Players and coaches of the National Capital Area's National Football League team didn't actually vote. But they did win their last home game before the Nov. 8 election.

By doing so, according to political and sports legend, the 'Skins have guaranteed that the political party currently occupying that big residence at 1600 Pennsylvania Avenue will stay there.

Is the Redskins Rule reliable? The so-called Redskins Rule is that the results of that NFL team's final home game before a presidential election is a predictor of the polling place winner.

The 'Skins-election correlation was discovered in 2000 by Steve Hirdt of the Elias Sports Bureau when he was looking for between play filler for the Monday Night Football game in D.C. that year. It's held true 17 out of 19 times since 1940.

So exactly what's this sure-fire election prognostication rule? Basically, it's a carryover of home-field advantage.

When the U.S. capital's NFL team wins this game, which it did Sunday, Oct. 16, by outscoring the visiting Philadelphia Eagles 27-20 at FedExField in suburban Landover, Maryland, the party in the White House in neighboring D.C. stays in executive branch control.

When the Redskins lose that final pre-election home game, the other party, essentially the visiting electoral team, wins the White House.

Since the 'Skins are on the road for their next two games, then are off the weekend before Election Day, Clinton's election looks pretty secure.

Unless the Cleveland Indians or Toronto Blue Jays win the World Series.

MLB makes an election pitch, too: Yes, there's a baseball answer to the football election prediction.

When the American League representative takes the World Series trophy, the Republican candidate tends to win.

So look for Donald Trump to trade his "Make America Great Again" baseball cap for a piece of official MLB merchandise bearing an Indians or Blue Jays logo. The Cleveland and Toronto teams are vying for the American League Series Championship.

I'm betting, given The Donald's focus on putting the United States first and how much he needs Ohio's 18 electoral college votes, he will opt for an Indians cap.

That plus the fact that our neighbors to the north can't vote in America's Nov. 8 election. And the Indians are, so far, winning this series 3-0 3-1 and we all know how much Trump likes winners.

Meanwhile, watch for Hillary to root, root, root for the Chicago Cubs and/or Los Angeles Dodgers, which are tied 1-1 in the National League Series Championship battle.

It's probably not much of a stretch for Clinton, a Chicago native, to pull for the Cubbies. But she has lots of Hollywood support, too, so the Dodgers is also an easy pick for her.

But if it comes down to an Indians vs. whomever in the World Series, Clinton could be conflicted.

Sure, a win by the American League Indians would not be a good electoral sign.

Scary election predictor: And let's not forget about Halloween. While many voters think this year's contest is plenty scary, if you open your doors on Oct. 31 to youngsters in Clinton and Trump masks, take note.

Some folks say the candidate whose Halloween mask is the better seller at Trick or Treat time will win the White House.

Regardless of what your favorite election superstition is, enjoy it. We definitely need to get some fun out of this year's campaign.

But don't rely on anyone else or any outside factors to determine this year's election.

Each of us doing our civic duty is the only real way to determine who wins the presidency.