The third and final presidential debate is tonight in Las Vegas, and it's a sure bet that most Americans will be delighted when this portion of the 2016 campaign is over. 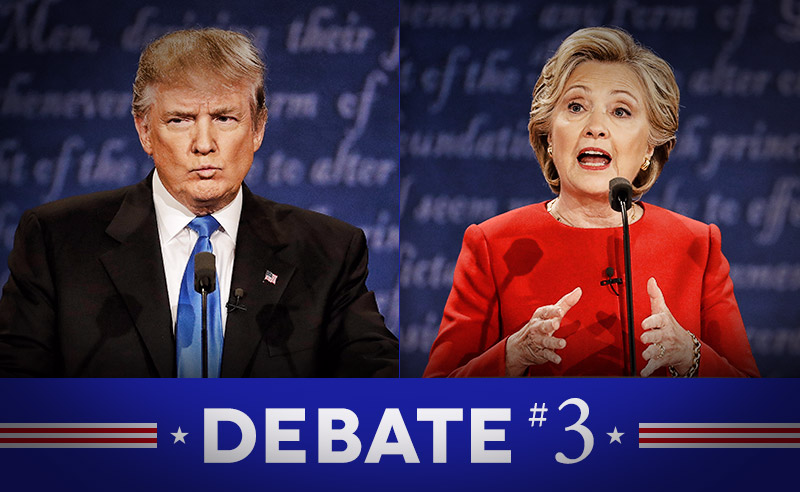 Donald Trump and Hillary Clinton will face off Oct. 19 on a stage at the University of Nevada, Las Vegas,
with Fox News' Chris Wallace moderating.

The previous face-to-face encounters between Democratic nominee Hillary Clinton and Republican hopeful Donald J. Trump have been awkward, frustrating and annoying, and I'm just talking about the reactions of viewers!

The debates also have been woefully short on policy specifics, especially taxes. But you can check out my overview of the tax remarks in the last two presidential debates, as well as during the vice-presidential set-to between Sen. Tim Kaine and Gov. Mike Pence, on the ol' blog's special debate review page.

Betting on the debate: So why watch tonight's last confrontation? Because you are a good American who wants to do your civic duty based on the most information you can collect.

That and because it's in Vegas, baby, where legal betting is the way of life. And that means you'll have a chance to see in real time which presidential debate prop bets pay off bigly.

That's right. Nevada bookmakers are taking bets on what might or might not happen or be said or be worn or, as with the NFL championship game, just about any other thing you can imagine to wager on tonight. After all, a presidential campaign is the Super Bowl of politics.

Here are some of my favorite prop bets that have been made so far on the final Clinton-Trump face-to-face:

Will the candidates shake hands before the debate starts?

Will they do so after it's over?

Will more people watch this debate than the second one, which had dismal ratings compared to the candidate's first face-off?

What color tie will The Donald wear? The odds currently are on a safe choice, with red leading at 1/2 and blue at 3/1.

What color jacket will Hillary wear? Again, even though they're in Vegas, flashy is out according to bettors, with early wagers favoring blue at 2/3 or black or white, each at 5/1.

How many times will Trump say "rigged"? Or "tremendous"? Or "great"? I can't count that high! Note: these also are good terms for your debate drinking game Bingo card.

How many times will Clinton's emails, either those lost or some revealed by WikiLeaks, be mentioned?

How many times will Trump's taxes be discussed?

A few folks think Trump might even walk out during the live broadcast. That would be tremendous (another word you can bet on, and take a shot after, being said), but I don't think it will happen.

So place your bets, folk, even if just for fun to get you through the scheduled 90 minutes. You can check out OddsShark for even more presidential debate #3 prop bets and the current probabilities of any of them occurring.

And remember, if you do happen to be in Nevada and do place a few real dollars on a Clinton-Trump debate prop bet, if your winnings are huge (or even if they're small), you'll owe taxes on them.

Good luck, to all the bettors, all of tonight's debate viewers and to the United States!