Oct. 17 is final filing deadline for most, but is extended further for folks in FL, LA, NC and WVA disaster areas

If earlier this year you asked the Internal Revenue Service for an extension to file your 2015 tax return, you're running out of time. That deadline is next Monday, Oct. 17.

Unless you live in parts of Florida, Louisiana, North Carolina or West Virginia.

UPDATE: Or in other areas of Florida and North Carolina, as well as South Carolina and Georgia. The IRS on Oct. 17 announced tax relief for these added Hurricane Matthew disaster areas. 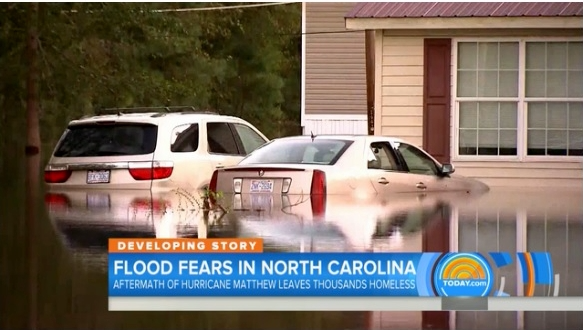 North Carolina, which has been hard hit by flooding from Hurricane Matthew rains, is the latest state where taxpayers are getting special consideration when it comes to their taxes. Click image for full NBC News report and video.

Areas of those four states were hard hit by severe weather, including Hurricanes Hermine and Matthew.

IRS offers special tax relief for storm victims: Because of those damages, as well as the loss of life, President Obama declared regions major disaster areas. The Federal Emergency Management Agency (FEMA) is coordinating recovery programs for those in the affected areas.

And the IRS has announced, among other tax-related relief options, even later tax filing deadlines for many in the storm-affected areas.

That includes for folks who had been planning to finally send in last year's 1040 by Oct. 17. That due date has been pushed back as late as next January for some filers.

Here are the new extension deadlines for specific parts of the United States:

Nov. 15, 2016 -- This deadline applies to some taxpayers in West Virginia who fell victim to severe storms, flooding, landslides and mudslides that occurred on June 22.

Taxpayers who have until Jan. 17, 2017, live in the Florida counties of counties of Citrus, Dixie, Hernando, Hillsborough, Leon, Levy, Pasco and Pinellas.

March 15, 2017 -- Hurricane Matthew will go down as one of the worst storms ever. More than 1,000 lives were lost as it passed over Haiti. In the United States, Hurricane Matthew has been blamed for at least 38 deaths across five Southeastern states.

In the wake of this devastating storm, the IRS has pushed the Oct. 17 filing deadline to next March.

In announcing the extension, the IRS noted that it expects to add relief for other Matthew-affected states soon, pending damage assessments by FEMA.

Business breaks, too: A variety of business tax deadlines are also affected, including the Oct. 31, 2016, and Jan. 31, 2017, deadlines for quarterly payroll and excise tax returns.

It also covers the special March 1 deadline that applies to farmers and fishermen who choose to forgo making quarterly estimated tax payments.

In addition, the IRS is waiving late-deposit penalties for federal payroll and excise tax deposits normally due on or after Oct. 4 and before Oct. 19 if the deposits are made by Oct. 19, 2016.

Next steps for storm victims: If you live in one of the affected areas where the IRS has announced extended tax deadlines, you don't have to do anything or contact the IRS.

The IRS automatically provides filing and penalty relief to any taxpayer whose address of record is in a recognized disaster area.

In addition, all workers assisting the relief activities who are affiliated with a recognized government or philanthropic organization also qualify for relief.

If you are a storm-affected taxpayer entitled to the filing relief and still get a late-filing or late-payment penalty, then you should call the number on the notice to have the penalty abated.

Also, if you live or have a business outside the covered disaster area but believe you should get the same tax relief as others in your state, call the IRS disaster hotline toll-free at 866-562-5227 to request this tax relief.

You can choose to claim those qualifying losses on either the tax return for the year in which they actually occurred -- in these cases, that's your 2016 return you'll file next year -- or you can claim them on your return for the prior year, which is the 2015 tax year.

Folks who have extra time to file their extended 2015 taxes need to look into whether it would be a good idea to take any storm losses on that filing when you finally submit it.

If you have already filed your 2015 taxes, run the numbers and see if you should amend that filing or wait until you do your 2016 taxes.

You can find more about claiming losses related to casualties, disasters and thefts in IRS Publication 547, as well as in the links collected on the ol' blog's special Storm Warnings disaster resources page.

Give the IRS document and the web page a look. It's always better to be prepared, since the Atlantic hurricane season isn't officially over until Nov. 30 and all types of disasters can happen any time of the year.