Have you gotten one of those fake Internal Revenue Service agent collection calls lately? If not, you can thank Indian law enforcement agents. 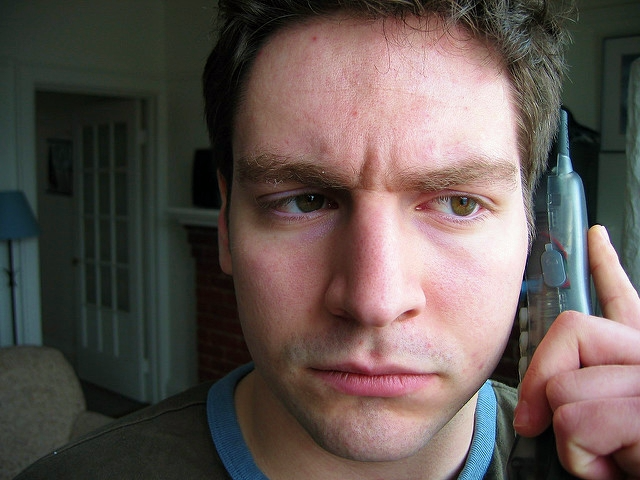 Does that "IRS agent" demanding money sound fishy? He's probably a tax scammer. Hang up! (Photo by rocketace via Flickr)

Since Indian officials on Oct. 4 raided call centers in Mumbai where many of these scam calls originated, the number of attempts to get folks to make fake tax bill payments has dropped dramatically.

BBB sees fewer scam reports: The Better Business Bureau (BBB) says that the IRS imposter scam had accounted for around a quarter of the reports it had received at its BBB Scam Tracker during that system's first year of operation.

But since police raided the Indian call centers earlier this month, the BBB says there's been a dramatic drop in new reports on the pervasive fake IRS agent scheme, which tax officials have called the largest tax scam ever.

The scam, in which a crook poses as an IRS agent -- one particularly brazen con artist even used the name of tax agency's chief! -- and threatens folks with financial penalties, lawsuits and even arrest if they don't pay the bogus back taxes. In the past year, I've gotten six of these calls.

The scam also migrated to Canada, with criminals also using tax scare tactics on our neighbors to the north.

In a typical week, the BBB says its Scam Tracker receives approximately 200 reports on tax scams. But that number dropped to just 11 reports of this scam during the week after the raids and arrests, nearly a 95 percent decline.

"We are delighted with this news," said Mary E. Power, president and CEO of the Council of Better Business Bureaus, which manages BBB Scam Tracker with support from local BBBs across North America. "We appreciate the efforts of the Mumbai police and the law enforcement agencies they worked with to close down this operation that has cost American and Canadian consumers millions of dollars."

Crooks still around, though: The persistent telephone tax scam earned the dubious dishonor back in 2014 as the largest ever..

Earlier this year, the Treasury Inspector General for Tax Administration (TIGTA) noted that since October 2013, nearly 900,000 individuals had been contacted by scammers, with more than 5,000 of them falling victim to con, collectively handing over $26.5 million to the crooked callers.

While the arrests in India apparently have slowed the scam, don't expect it to disappear. Crooks are creative. They find new locations from which to operate and add new twists to their schemes to steal your money and tax refunds.

"Taxpayers across the nation face a deluge of these aggressive phone scams. Don't be fooled by callers pretending to be from the IRS in an attempt to steal your money," warns IRS Commissioner John Koskinen. "We continue to say if you are surprised to be hearing from us, then you're not hearing from us."

Koskinen notes that the criminals use many scam variations, and attempt to get your money by email as well as phone. "Some schemes may say you're entitled to a huge refund. These all add up to trouble," according to the IRS commissioner.

Tax scam warning signs: To ensure you don't fall victim to any tax scams, the IRS says to be on the lookout and listen for five things that crooks often do, but which the IRS does not use in dealing with taxpayers.

The IRS will never:

Any one of these five instances is a tell-tale sign of a tax scam. Hang up. Ignore the call. Don't respond to the email.

Report the crooked call: Then let real tax officials know that you were a tax scam target.

Contact TIGTA to report the call. You can use the IRS Impersonation Scam Reporting web page or call the tax oversight agency toll-free at 800-366-4484.

Also report the scam attempt to the Federal Trade Commission. Use the FTC Complaint Assistant at FTC.gov. Add "IRS Telephone Scam" in the notes.

You also can report the scam attempt to the BBB Scam Tracker.

And if the call is a concern because you know you owe a federal tax bill, or think you may owe, go directly to Uncle Sam's tax collector yourself.

Call the IRS at 800-829-1040 and talks with real IRS employees who can help you arrange legitimate ways to pay your tax bill. Yes, it's no fun paying taxes, but better your dollars go to the real debtor and pay for government operations rather into the crooks' accounts.