With the Oct. 17 filing extension colliding with Hurricane Matthew's aftermath, the Internal Revenue Service today announced additional counties in which taxpayers affected by the storm will have more time to file. 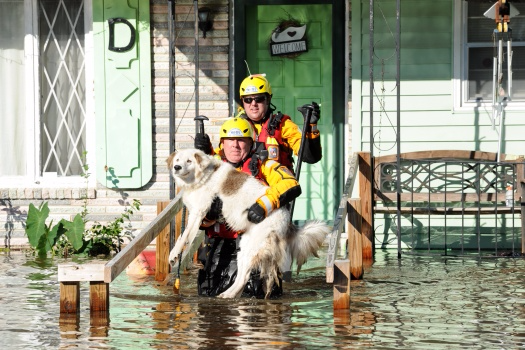 The IRS has officially added parts of Florida, Georgia and South Carolina to the Hurricane Matthew areas that will get additional tax relief. It also included more counties in North Carolina counties, which it had previously announced as eligible for special storm-related tax relief.

The IRS decision means that residents or businesses with valid extensions in all the affected areas don't have to rush to meet tonight's midnight extended filing deadline. They have until March 15, 2017, to get certain individual and business tax returns into the IRS and make certain tax payments.

While affected taxpayers in the South and Southeast don't have to rush now to finish their 2015 tax returns, if when you finally do complete the paperwork you discover that you owe more than you paid when you got the extension, penalties and interest will apply to that underpayment.

The IRS notes that because the tax payments related to the 2015 returns were originally due on April 18, 2016, well before the hurricane hit, those payments are not eligible for the relief being offered here.

So if you think you might owe with your extension, try to make at least some payment today.

Additional tax tasks covered: While the key deadline is today's Oct. 17 extended filing due date, which now is pushed until March 15, 2017, for those in the IRS announced Hurricane Matthew affected areas, the tax agency notes that the new deadline also applies to the Jan. 17, 2017, deadline for making quarterly estimated tax payments.

A variety of business tax deadlines are also affected including the Oct. 31 and Jan. 31 deadlines for quarterly payroll and excise tax returns. It also includes the special March 1 deadline that applies to farmers and fishermen who choose to forgo making quarterly estimated tax payments.

In addition, the IRS is waiving late-deposit penalties for businesses that must make federal payroll and excise tax deposits normally due on or after Oct. 4 and before Oct. 19 if the deposits are made by Oct. 19, 2016.

The IRS automatically provides filing and penalty relief to any taxpayer with an IRS address of record located in the disaster area. That means you don't have to contact the IRS to get this relief.

The IRS says it also will offer this expanded relief to any area subsequently designated by the Federal Emergency Management Agency, or FEMA, as qualifying for either individual assistance or public assistance. Taxpayers in counties that are added later to the disaster area list will automatically receive the same filing and payment relief.

If you are eligible for the relief but do get a late filing or late payment penalty notice from the IRS that has an original or extended filing, payment or deposit due date falling within the postponement period, call the number on the notice to have the penalty abated.

And if you aren't in an official disaster area but the records you need to take care of your taxes are located in the affected area, call the IRS at 866-562-5227. This also applies to workers assisting the relief activities who are affiliated with a recognized government or philanthropic organization.

Other disasters, other deadlines: Finally, note that some previously declared disaster areas already were granted tax relief by the IRS. This includes folks affected by storms, flooding and Hurricane Hermine and who live in certain counties in Florida, Louisiana, North Carolina and West Virginia.

Check out my earlier post on these prior disaster areas in Florida, Louisiana, North Carolina and West Virginia and the tax relief and new deadlines granted by the IRS.

You also can find more about claiming losses related to casualties, disasters and thefts in IRS Publication 547, as well as in the links collected on the ol' blog's special Storm Warnings disaster resources page.