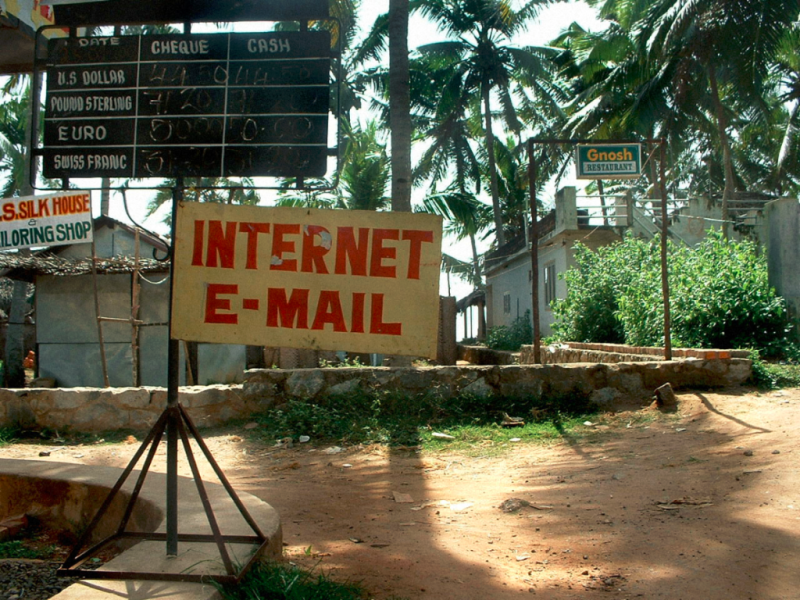 The IRS' email is not as rudimentary as options for backpackers, but apparently a recent, and costly, system upgrade didn't work out as the tax agency had hoped. (Photo by mattwi1s0n via Flickr CC)

Upgrade failure: Concerns about the IRS email system came to light in a Treasury Inspector General for Tax Administration report, dated Sept. 30 and released Oct. 14, in which the IRS oversight office noted that recent efforts to upgrade the IRS' electronic communications system did not work as planned.

"The IRS purchased subscriptions for an enterprise email system that, as it turned out, it could not use," noted TIGTA analysts. The IRS was looking to upgrade its old email system and replace it with one that, among other things, has archive capability.

The tax agency was looking for a new system that could comply with an Office of Management and Budget (OMB) directive requiring federal agencies to manage both permanent and temporary email records in an accessible electronic format by December 2016.

However, added the TIGTA report, IRS purchased the email system "without first determining project infrastructure needs, integration requirements, business requirements, security and portal bandwidth, and whether the subscriptions were technologically feasible on the IRS enterprise."

More tax-writer interest in IRS emails: Easy access to old IRS emails also been a focus of many in the GOP upset with their inability to get email records related to the handling of Tea Party and other conservative groups' 501(c)(4) tax-exempt status applications.

Hatch, Brady and Roskam on Oct. 19 sent a letter to IRS chief Koskinen, taking his agency to task not only for spending $12 million on an email system it cannot use, but also pointing to TIGTA findings that the IRS may have violated appropriations law.

The problem, according to the Congressional letter (and TIGTA), is that the IRS spent money designated for use in fiscal years 2014 and 2015 on software subscriptions that it did not actually deploy in those years.

They contend in the letter that:

"As a result of the IRS's carelessness, the Service will not meet OMB's December 31, 2016, deadline to modernize its email system, wasting millions of taxpayer dollars and further delaying full IRS transparency and accountability."

In releasing the letter, the Senator and Representatives added that "these failures are unacceptable and must be addressed."

IRS responses, now and future: They want Gina Garza, the IRS' chief information officer, to brief the staff of both Senate Finance Committee and Ways and Means by Nov. 2.

I suspect, depending on what the committee staff hear, Garza also could be making an appearance at full hearings on the email system.

Until then, we have the IRS's immediate response to the Congressional snail mail correspondence.

"We strongly disagree that the IRS wasted taxpayer dollars," the agency said in a statement reported by Tax Analysts/Tax Notes. The IRS added that it "followed appropriate management processes and developed the acquisition in line with federal regulations."

That reaction was similar to the IRS' written answer to TIGTA's findings.

While the IRS basically agreed that it did not get its $12 million worth from the new email system, it contends that the money was not wasted.

"The assertions in the report stem from differing perspectives on the approach the IRS took in acquiring Microsoft (MS) Office365 Pro Plus and MS Exchange Online Plan 2," wrote Garza in a response letter included in the TIGTA report. "At the time of the acquisition, the IRS deemed the subscription purchases strictly as an upgrade from our current version of MS products, following the same approach and practices that had been used for prior upgrades. As such, the IRS followed appropriate management processes and developed the acquisition plan in line with FAR regulations for acquiring upgrades to software."

"In 2010, the IRS developed an enterprise strategy to reduce the yearly expenditure on MS software and services which resulted in saving taxpayers over $127 million," she wrote. "As our strategy continued to evolve, the IRS determined in 2014 it could save taxpayers an additional $21 million by purchasing subscriptions instead of perpetual licenses ...," a transition that "provided more flexibility and efficient management" of its email system.

Some support for IRS: While the money is valid concern, some familiar with how the appropriations and federal bidding systems work say that the tax agency should be cut some slack.

They point to the inherent slowness in the federal procurement process, as well as the Congressional funding process.

Marcus Owens, a partner at Loeb & Loeb LLP, told Bloomberg BNA that when he was a director of the IRS Exempt Organizations Division, his unit received hand-me-down computers from other areas of the agency. That, he said, demonstrated how the agency has historically not received enough funding to "do what it is supposed to do as well as to modernize the back-office systems."

Congress has cut the IRS' budget by $900 million since 2010. That, say IRS supporters, impedes the agency's ability to do its primary jobs of collecting taxes and enforcing ever-increasing tax laws while simultaneously meeting administrative needs such as technology upgrades.

"If you're going to under fund the agency’s core mission activities, which is what Congress has done the last few years, that means the money to support these non-mission critical, arguably not mission-related kinds of activities, just isn't there," Owens said.

How does stuff like that keep happening? What do you think of privatizing as much of the IRS as practical. Then use contractors who depend upon the results they produce for the country. We only see the waste from our own perspective instead of standing on the heap and seeing the waste over several generations. I have to believe we can come up with solutions if we try though.