And we're done. With the 2016 presidential debates, not the election.

The debates were supposed to help us voters make an informed decision as to whether we want Democrat Hillary Clinton or Republican Donald Trump as our president for the next four years. 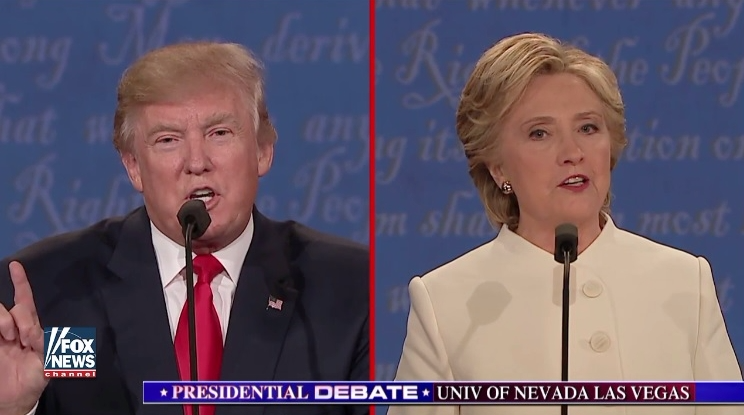 Things got nasty last night (Oct. 19) in Las Vegas, and not in the fun Janet Jackson choreographed way. However, "Miss Jackson, if you're nasty," was a big beneficiary of the debate's ad lib.

Trump called Clinton "such a nasty woman" during her closing remarks and just after she mentioned her plan to hike payroll taxes on the rich, during which she worked in a jab about the possibility that Trump legally avoided paying taxes for almost two decades

Finally, some tax talk: But on the plus side, the final face-to-face between Clinton and Trump was the most policy oriented of the three debates.

And the candidates, thanks to the guidance of moderator Chris Wallace of Fox News, did talk about taxes more than just during that testy moment at the end.

Here is the debate transcript section where taxes were discussed, along with some of my observations (in italics) and graphics interspersed:

CHRIS WALLACE: We are going to move on to the next topic, which is the economy.  I hope we handle that as well as we did immigration, you also have very different ideas of how to get the economy growing faster. Secretary Clinton, in your plan government plays a big role, you see more government spending, more entitlements, more tax credits, more tax penalties. Mr. Trump, you want to get government out with lower taxes and less regulations. We're going to drill down into this a little bit more, but in this overview, please explain to me why you believe that your plan will create more jobs and growth for this country and your opponent's plan will not. In this round, you go first, Secretary Clinton.

HILLARY CLINTON: I think when the middle class thrives, North America thrives and so my plan is based on growing the economy, giving middle-class families many more opportunities. I want us to have the biggest jobs program since World War II, jobs in infrastructure and advanced manufacturing. I think we can compete with high wage countries and I believe we should. New jobs and clean energy, not only to fight climate change, which is a serious problem, but to create new opportunities and new businesses. I want us to do more to help small business. That's where two thirds of the new jobs are going to come from.

I want us to raise the national minimum wage because people who live in poverty, who work full-time, should not still be in poverty and I sure do want to make sure women get equal pay for the work we do.

I feel strongly that we have to have an education system that starts with preschool and goes through college. That's why I want more technical education in high schools and in community colleges, real apprenticeships to prepare young people for the jobs of the future. I want to make college debt-free and for families making less than a hundred twenty five thousand dollars. You will not get a tuition bill from a public college or a university if the plan that I worked on with Bernie Sanders is enacted.

The college assistance portion of Clinton's tax plan is widely seen as a by-product of her Democratic primary battle with Bernie Sanders, who has reverted to his Independent status as Vermont's junior U.S. Senator. Sanders called for free college, which Sanders acknowledged, along with every tax policy analyst and economist, could only be accomplished by dramatically higher across-the-board taxes.

Clinton's original plan was for debt-free college educations. That's morphed into a three-month moratorium on all student debt payments, free community college for all and a major push for free college tuition for students from households earning $125,000 or less. This so-called new college compact would cover most U.S. families at a cost of $350 billion over 10 years. Clinton proposes covering that cost by closing tax loopholes.

And we're going to work hard to make sure that it is, because we are going to go where the money is. Most of the gains in the last year since the great recession have gone to the very top. So we are going to have the wealthy pay their fair share. We are going to have corporations make a contribution greater than they are now to our country. That is a plan that has been analyzed by independent experts that said it could produce ten million new jobs. By contrast, Donald's plan has been analyzed to conclude it might lose three and half million jobs.

Moody's Analytics estimates that during four years in the White House, Trump's economic proposals would lead to 3.5 million lost jobs, while Clinton's plan would create 10 million jobs. But that's assuming the plans were enacted as proposed and things played out in real life as projected, a highly unlikely prospect.

Why? Because his whole plan is to cut taxes to cut give the biggest tax breaks ever to the wealthy and the corporations. Adding twenty trillion dollars to our debt and causing the kind of dislocation that we have seen before, because it truly will be trickle-down economics on steroids. So the plan I have will actually produce greater opportunities; the plan he has will cost us jobs and possibly lead to another great recession. 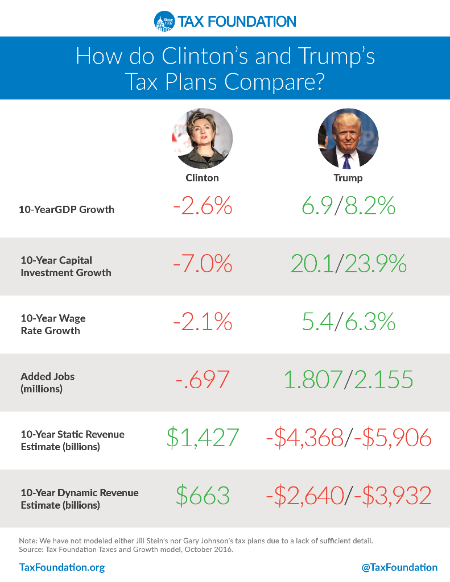 WALLACE: Secretary, thank you. Mr. Trump, why will your plan create more jobs than Secretary Clinton?

DONALD TRUMP: Well, first of all before I start on my plan, her plan is going to raise taxes and even double your taxes. Her tax plan is a disaster and she can say all she wants about college tuition and I'm a big proponent, we're going to do a lot of things for college tuition, but the rest of the public is going to be paying for it. We will have a massive, massive tax increase under Hillary Clinton's plan.

But I'd like to start off where we left, because when I said Japan and Germany -- and I'm not just singling them out but South Korea -- these are very rich powerful countries. Saudi Arabia -- nothing but money, we protect Saudi Arabia. Why aren't they paying?

We have to tell Japan and a very nice way we have to tell Germany all these countries we have a say you have to help us out. We have during his regime, during President Obama's regime, we have doubled our national debt. We are up to twenty trillion dollars. So my plan - we are going to renegotiate trade. We're going to have a lot of free trade, more free trade than we have right now.

But we have horrible deals. Our jobs are being taken out by the deal that her husband signed - NAFTA - one of the worst deals ever. Our jobs are being sucked out of our economy. You look at all of the places that I just left - you go to Pennsylvania you  to go to Ohio. You go to Florida you go to any of them you go upstate New York, our jobs have fled to Mexico and other places. We are bringing our jobs back. I'm going to renegotiate NAFTA. And if I can't make a great deal, then we're going to terminate NAFTA t we're going to create new deals are going to terminate it we're going to make a great trade deal And if we can't, we're going to go separate way because it has been a disaster.

CLINTON: Well, let me translate that if I can Chris...

CLINTON: Because fact is he is going to advocate for the largest tax cuts we've ever seen, times more than the tax cuts under the Bush administration. 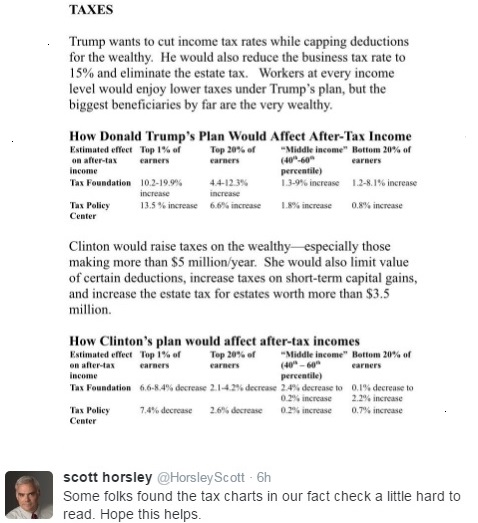 Trump's revised tax plan, which is based largely on Republican House leadership proposals, is less generous than his original one, but it still offers wealthier taxpayers a cut.

I have said repeatedly throughout this campaign I will not raise taxes on anyone making two hundred fifty thousand dollars or less. I also will not add a penny to the debt. I have costed out what I'm going to do. He will, through his massive tax cuts, add twenty trillion dollars to the debt. Well, he mentioned the debt. We know how to get control of the debt.

When my husband was president, we went from a three hundred million dollars deficit to a two hundred billion dollars surplus, and we're actually on the path to eliminating the national debt. When President Obama came to office, he inherited the worst economic disaster since the Great Depression. He has cut the deficit by two thirds. So, yes, one of the ways you go after the debt, one of the ways you create jobs is by investing in people. So I do have investments -- investments in new jobs, investments in education, skill training and the opportunities for people to get ahead and stay ahead. That's the kind of approach that will work. Adding taxes on the wealthy, we've tried that -- it has not worked the way that it has been promised.

'Nasty' turn on taxes: Finally, here's the exchange as the debate was wrapping up where Clinton gigged Trump about his taxes and provoked his "nasty woman" comment, which quickly grew into a social media hashtag and internet meme:

CLINTON: That's part of my commitment to raise taxes on the wealthy. My Social Security payroll contribution will go up, as will Donald's, assuming he can't figure out how to get out of it. But what we want to do is to replenish the Social Security Trust Fund...

TRUMP: Such a nasty woman.

CLINTON: ...by making sure that we have sufficient resources. And that will come from either raising the cap and or finding other ways to get more money into it. I will not cut benefits. I want to enhance benefits for low-income workers. And for women who have been disadvantaged by the current Social Security system. But what Donald is proposing with these massive tax cuts will result in a twenty trillion dollar additional national debt. That will have dire consequences for Social Security and Medicare. And I'll say something about the Affordable Care Act, which he wants to repeal: the Affordable Care Act extended the solvency of the Medicare Trust Fund. So if repeals it, our Medicare problem gets worse. What we need to do is go after...

TRUMP: Your husband disagrees with you.

CLINTON: ...the long-term health care drivers. We've got to get costs down, increase value, emphasize wellness. I have a plan for doing that. And I think that we will be able to get entitlement spending under control by with more resources and harder decisions.

Full debate details: You can check out the full transcript for more on the candidates' other economic and non-tax ideas, or, if you have 90 or so minutes to kill, watch the video replay.

I hope the candidate encounters have been helpful. They have at least been somewhat entertaining, if you're a fan of horror movies.