Alec Baldwin has been having a field day portraying Donald Trump, the presidential candidate with, among other things, some tax issues.

Click image to watch the Saturday Night Live skit from which this Alec Baldwin as Donald Trump GIF is taken.

Now from the life imitates art files, Baldwin is facing his own allegations of tax avoidance.

New York City art dealer Mary Boone filed a motion in New York State Supreme Court last week accusing the actor of "failing to pay sales tax." She alleges that in order to avoid New York taxes, Baldwin had the painting shipped to his Los Angeles home and then shipped it to apartment in the Big Apple.

The tax charge apparently is part of a legal motion by Boone to dismiss a lawsuit filed by Baldwin in which he contends that that the Bleckner painting "Sea and Mirror" that he bought from her in 2010 was not the one for which he paid $190,000. 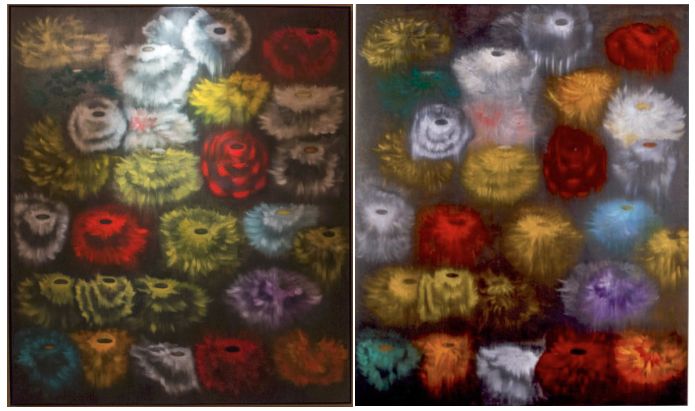 The painting on the left is the Ross Bleckner work bought by actor Alec Baldwin. He says he thought he was paying for the piece on the right, painted in 1996 and sold by Sotheby's in 2007 to another buyer. (Images courtesy Artnet.)

Instead, Baldwin alleges in a lawsuit he filed in New York in September that Boone delivered another, albeit similar, Bleckner work. Baldwin claims in the suit that Boone promised to get the painting from an unnamed collector, but instead delivered a different version of the painting, also done by Bleckner.

The actor is seeking the difference between the purchase price of the painting he owns and the current value of the original "Sea and Mirror."

Art dealer answers with tax charge: Boone, however, is not standing pat in the art feud.

In this latest legal filing in connection with the artwork, Boone's lawyer says:

"As the documentary evidence makes clear, Baldwin sought relief from the New York state and city sales taxes — $16,625 — by causing the painting to be shipped momentarily to his California residence, with the instruction that the painting remain in California only long enough for his assistant to sign for it, after which it was to make an immediate U-turn so that it could be installed in Baldwin's New York City apartment."

In a sworn affidavit Boone also says, "I respectfully submit that Baldwin cannot connive an elaborate scheme to evade sales taxes and yet claim that there are any circumstances under which he is entitled to punitive or exemplary damages in connection with the same transaction."

Lawyers for Baldwin, who before his Trump impersonations on Saturday Night Live was most recently known for his work on the NBC comedy "30 Rock," say that the tax avoidance charge is "a blatant diversionary tactic and an attempt to distract from the fraud she is not denying."

Regardless of what happens with the tax avoidance accusation and the painting purchase itself, that nearly $17,000 in sales tax is enough to earn this week's By the Numbers honors.