Add EAs to the tax preparation -- and privacy -- mix

"An American has no sense of privacy. He does not know what it means. There is no such thing in the country."

That observation on the American penchant for (over)sharing was made by the Irish playwright George Bernard Shaw long before reality TV shows and social media. It's taken on new significance this election year as we have a major party candidate who, years before he launched his White House quest, was introduced to the electorate as star of his own television program. 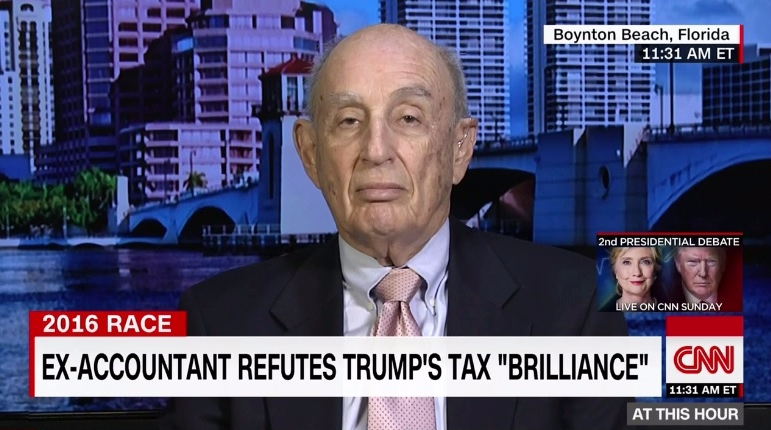 But despite Donald J. Trump's embrace of mass and social media, there remains one area where he's insistent on privacy: his personal tax returns.

Trump's former accountant, however, is more talkative about his former client's filings.

Chatty as his former client: Jack Mitnick was tracked down by the New York Times after the newspaper received copies of three of Trump's 1995 state tax returns. They show that The Donald might have avoided paying federal taxes for as much as 18 years.

The semi-retired octogenarian lives in Florida, but he's been making the media rounds nationwide via satellite, telling anyone who'll listen -- and there are lots of open ears out there -- that despite Trump's claims that he knows the tax code better than anyone and "brilliantly" manipulated it to his benefit, the GOP presidential candidate did very little when it came to his taxes.

Mitnick says he's the one who "did all the work."

But, even though he hasn't worked on a Trump return since 1996, should Mitnick be talking?

As I noted last week at my other tax blog, a lot of tax folks say no.

CPAs say keep it zipped: CPAs might not have the same client privilege rules as attorneys, notes Amit Chandel, a CPA in Brea, California, (and, fittingly, a tax pro I've become friends with thanks to social media), "but we have ethical standards to uphold and a fiduciary duty to keep our mouth shut most off the time."

Across the country in the Washington, D.C. area, another CPA agrees. "The best thing for an accountant, keep your damn mouth SHUT, no if and buts, period," says Manjit Singh.

Overlooked Enrolled Agents: Mitnick's chattiness has raised the question I address in the Bankrate blog post on which tax pro is better at protecting taxpayer confidentiality, a CPA or a tax attorney?

Some readers were quick to point out, though, that there's a third answer: an Enrolled Agent.

"I have issues, no umm, reservations … [about] your post at Bankrate.com," another internet pal, Bruce McFarland, who has a tax preparation business in Belton, Missouri, wrote me. "I didn't see any reference … from anyone at NAEA [National Association of Enrolled Agents]. The EA takes client confidentiality very serious and the EAs I know would never have spilled their knowledge about a client's information. I felt the article was very pro CPA and attorney."

In my defense, the decision was made to focus on accountants because that's the designation of the tax pro Trump used. As for lawyers, well, everyone knows, and often bitches about the attorney-client privilege situation.

A look at EAs: But since I have another blogging outlet here, I get a chance, as my Bruce suggests, to get the EA designation recognized by the tax paying public. Here goes.

As you would expect, the NAEA offers plenty of good information on exactly what an Enrolled Agent is, how a person becomes one and how they serve taxpayers. Here are a few Q&A highlights culled from the website:

What is an enrolled agent?
Enrolled agents are the only federally licensed tax practitioners who specialize in taxation and who also have unlimited rights to represent taxpayers before the IRS. They join attorneys and CPAs in that expansive representation ability. The EA profession dates back to 1884 when, after questionable claims had been presented for Civil War losses, Congress acted to regulate persons who represented citizens in their dealings with the U.S. Treasury Department.

How does someone become an EA?
An EA license can be earned by (1) passing a comprehensive examination which covers all aspects of the tax code, or (2) having worked at the IRS for five years in a position which regularly interpreted and applied the tax code and its regulations. All EA candidates also must bass an IRS-conducted background check.

How can an enrolled agent help me?
Enrolled agents advise, represent, and prepare tax returns for individuals, partnerships, corporations, estates, trusts, and any entities with tax-reporting requirements. Enrolled agents' expertise in the continually changing field of taxation enables them to effectively represent taxpayers at all administrative levels within the IRS

What tax jobs can the EA do for you?
Enrolled Agents advise, represent and prepare tax returns for individuals, partnerships, corporations, estates, trusts and any entities with tax-reporting requirements.

EA/taxpayer privilege: And, tying it back to my earlier blog post, the NAEA notes that as far as privilege, the IRS Restructuring and Reform Act of 1998 allows federally authorized practitioners a limited client privilege. This privilege allows confidentiality between the taxpayer and the enrolled agent under certain conditions.

The privilege applies to situations in which the taxpayer is being represented in cases involving audits and collection matters. It is not applicable to the preparation and filing of a tax return. This privilege does not apply to state tax matters, although a number of states have an accountant-client privilege.

But, notes the NAEA, its members are required to abide by the provisions of the Department of Treasury's Circular 230, a publication of certain U.S. Treasury regulations that includes the rules governing practice before the IRS. NAEA members are also bound by a Code of Ethics and Rules of Professional Conduct of the Association.

In that EA ethical code, members are instructed to maintain the confidentiality of professional relationships.

Its rules of professional conduct further state that, "Members and associates will maintain a confidential relationship between themselves and their clients or former clients, disclosing confidential information only when authorized or legally obligated to do so."

Pick the pro who works for you: Bottom line, folks, is that there are reputable credential tax professionals out there in the legal, accounting and EA fields.

Don't automatically presume one is better than the other, especially when it comes to your personal tax situation.

And don't discount one just because you're not as familiar with it as the others.

Do your own due diligence before selecting a tax pro. You might find an EA is the one you want helping you file your returns.

Great info. Thanks for sharing this very informative article about EAs. We're sure it can help our clients here at TopCPAOrlando.com.