Trump: 'Smart' for paying no taxes, or just greedy?

Donald Trump and Hillary Clinton finally went toe-to-toe last night in the first debate of the 2016 presidential election campaign and taxes were discussed. 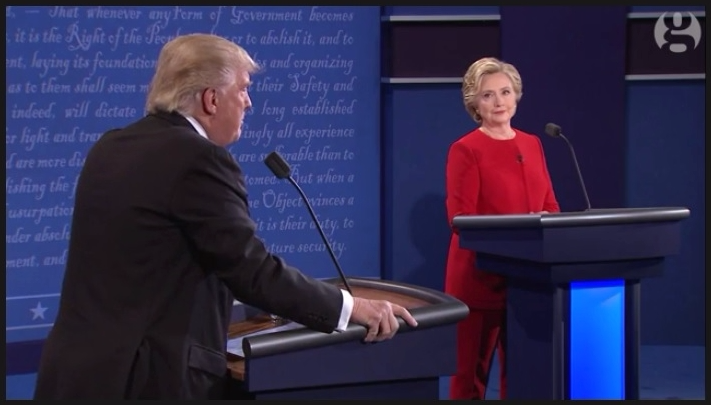 Donald Trump and Hillary Clinton discuss taxes and emails on the first debate of the 2016 presidential election campaign. Click the image to view The Guardian's video clip of the candidates discussing Trump's still hidden tax returns.

UPDATE/MORE COVERAGE:
You can see more about Trump's taxes and the debate,
complete with video of the Hillary Shimmy,
in my tumblr blog Tumbling Taxes item on this topic.

Unfortunately, there really wasn't much tax talk about policy direction or reforming our bloated tax code. You can check out my separate blog page with highlights of last night's Trump and Clinton references to their tax proposals.

Trump said he would defy his lawyers' advice and release his tax returns, which he reminded us, again, are under audit, if Clinton would show us the 33,000 emails deleted from the private server she used as Secretary of State.

Clinton ignored the email reference and went straight to the questions that Trump's still secret tax returns have raised among many taxpayers:

"For 40 years, everyone who has been running for president has released their tax returns. … We know the IRS has made clear there is no prohibition on releasing it when you're under audit.

"So you've got to ask yourself, why won't he release his tax returns?

"There is something he is hiding."

Smart move or smartass reply: Trump jumped in to tell his Democratic opponent that by not paying any taxes, "That makes me smart."

Or does it make you self-centered and greedy?

That might make you smart as a business person. But as a public servant in the highest office in the country, that tax attitude makes you selfish.

Yes we -- all of us, from the 1600 Pennsylvania Avenue occupant to all of The Donald's rich peers to the Jane and Joe Taxpayers in America's cities and small towns to Bill and Betty Farmer in the country's more rural areas – want to pay low taxes, but no taxes?

Sure, philosophically that's wonderful. Realistically, it would be a disaster. What would our country look like if we all avoided paying any income tax?

Paying for what we all need: Our taxes, at all governmental levels, pay for teachers, our military equipment and personnel, our roads and bridges and other infrastructure.

Taxes also cover programs to help those who don't pay taxes not because they have advisers to devise elaborate tax avoidance strategies, but because they don't make enough money to pay taxes.

Even my Republican friends, and yes, I have a few, acknowledge that we need taxes to fund the country. We just have different ideas over who should pay how much and for what.

But we agree that, for most of us, paying no taxes whatsoever is not an option.

And my GOP pals  and I also want to see Trump's tax returns to get confirmation about how much, or little, he pays Uncle Sam.

They are not alone. Most Republicans told pollsters that they, too, want to see Trump's tax returns.

If Trump doesn't release his 1040s by the next debate on Oct. 9, look for Clinton to bring up the subject again.