I love cats and I love art, but I gotta say that The New York Times story yesterday (Sept. 2) on a feline-themed museum exhibit kind of grossed me out. So of course I'm sharing it with y'all.

"The Kittens' Wedding" is the centerpiece of a new show at a Brooklyn, New York, museum. But it's not your typical work of art. 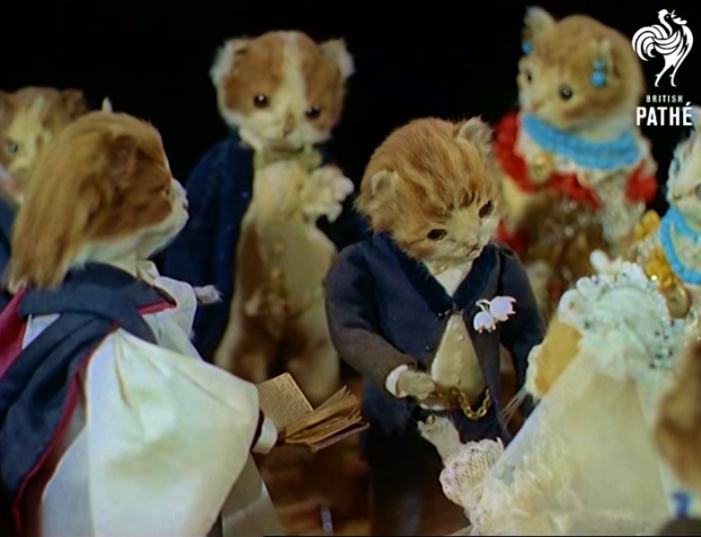 Stuffed cats say "I do" in a scene from a British Pathé report on the anthropomorphic taxidermy of Walter Potter. Click image to watch the video.

It's an elaborate tableau by the Victorian taxidermist Walter Potter that is, according to NYT writer Jennifer Schuessler, "the eerily commanding centerpiece" of the new exhibition Taxidermy: Art, Science & Immortality at the Morbid Anatomy Museum.

Weird wedding: The marriage ceremony of the young cats, completed in the 1890s, shows a wedding party gathered solemnly at an altar.

It is not the largest of the preserved animal pieces by Potter, a self-trained British Victorian country taxidermist, who also posed stuffed rabbits, squirrels and rats in addition to kittens as if engaging in human activities. But it is, writes Schuessler, the only one in which the animals are fully clothed, right down to frilly undergarments properly out of sight.

OK. Glad she checked so I don't have to.

Joanna Ebenstein, creative director and co-founder of the museum, calls the wedding piece "such a perfect object, with a tension between the perverse and the adorable. I think it will really shock people."

Or creep them out.

You can decide for yourself what emotions the work elicits if you're going to be in the Big Apple in the next couple of months. The Potter piece, which Ebenstein says is the first formal exhibition of any of his work in the United States, will be on display through Nov. 6.

Persistent preservation: I sort of understand taxidermy, but from a hunting standpoint.

And I know some folks have their pets preserved. I'm looking at you, TV cowboy Roy Rogers and your stuffed palomino stallion Trigger.

For the most part, though, preserved dead animals for whatever reason is not my thing. That's what photos are for.

Apparently, however, taxidermy as art happens enough so that it's addressed in the tax code

Tax deductible taxidermy: IRS Publication 526 cites taxidermy property among the types of charitable contributions that are subject to special rules.

The document goes on to spell out the conditions under which a person can take a tax deduction for a donation of a taxidermy item. Specifically, the IRS says:

If you donate taxidermy property to a qualified organization, your deduction is limited to your basis in the property or its fair market value, whichever is less. This applies if you prepared, stuffed, or mounted the property or paid or incurred the cost of preparing, stuffing, or mounting the property.

Taxidermy property means any work of art that:

Earlier eagle art controversy: A stuffed American eagle as a part of a famous artwork also got special tax attention a few years ago.

The federal interest then, however, was as much about artist Robert Rauschenberg's use of the protected U.S. avian symbol in the multimedia work "Canyon" as for its taxable value.

The IRS and estate that controlled the artwork finally reached a $41 million tax deal and found a new permanent home for the piece at New York City's Museum of Modern Art.

Since art is subjective, I guess the Potter stuffed animal exhibit deserves some attention.

Still anthropomorphic taxidermy isn't the choice I'd make if I was deciding where to spend my New York City museum time.

But to each his or her own, both in art appreciation and tax deductible donations.