Special tax treatment for businesses has received a lot of attention this week in the wake of the European Commission's ruling that Apple received illegal tax breaks from Ireland.

Philadelphia, whose skyline is shown here, offers more business tax breaks than other major U.S. city. Now it must decide if that foregone tax money is worth it. (Photo by Massimo Catarinella via Wikimedia Commons)

Daniel Shaviro, law professor at New York University and author of the tax (and more) blog Start Making Sense, notes that Apple's $14.5 billion of under-taxation over 10 years divided by 60,000 jobs (6,000 per year for 10 years) comes to more than $240 million per job per year underwritten by Irish taxpayers.

It is those kinds of figures that prompt the constant question of whether corporate tax incentives are an appropriate use of public funds.

And it's a persistent query not just globally, but also within the United States' borders.

U.S. specific tax breaks for businesses: American cities, counties and states have long contended that they need to provide some tax breaks to attract and keep businesses.

Without tax exemptions or incentives, goes the argument, new companies won't start or existing ones won't relocate or remain within their borders.

Whether that's true remains a point of spirited debate among not just tax bloggers, but the taxing jurisdictions, their citizens, economists and tax policy experts.

It's also debatable as to how much these tax breaks, known in the tax world as expenditures, pay for themselves or cost the granting tax entities.

Sometimes it's relatively easy to put a dollar amount, as Shaviro does with Apple-Ireland issue, on the tax breaks. Other times, the numbers are fuzzy at best.

But when the cost outweighs the benefits, then come the next difficult decision as to whether the city or other locality should scrap some of the breaks.

Philadelphia tax freedom for business: Folks in Philadelphia are now trying to determine just that after a Pew Charitable Trusts study found that the City of Brotherly Love has the most business-related tax expenditures of any major U.S. city.

Pew researchers examined these tax breaks in Philadelphia and the rest of the nation's 30 largest cities for a new report, "Philadelphia Business Taxes: Incentives and Exemptions."

Philadelphia had the 21 such tax-expenditure programs, the largest number of all the cities. 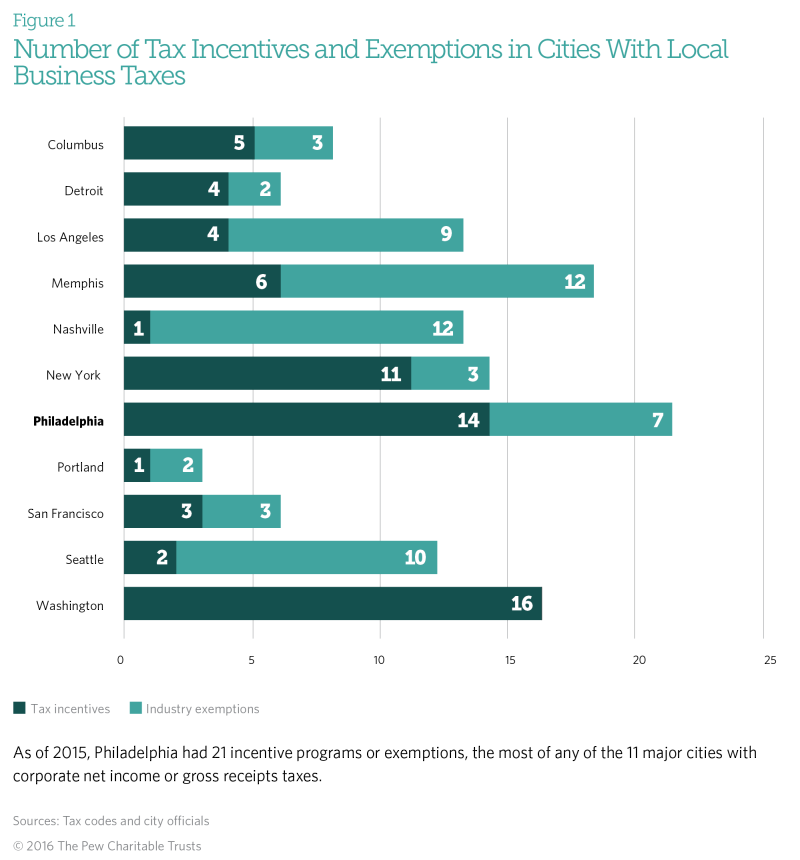 Pennsylvania's largest city was followed by Memphis, Tennessee, with 18; Washington, D.C. with 16; and New York, New York with 14.

Philly also is one of only 11 cities that impose levies directly on corporate profits or revenue and thus could offer tax breaks to these sorts of businesses, says Pew. In addition to the eastern Pennsylvania metropolis, the other cities are:

Of those cities, only Philadelphia taxes both business profits and revenue.

Increased incentives and exemptions: Pew found that Philadelphia has 14 business tax incentives. The amount of tax money sacrificed by those incentives averaged $109.6 million per year from 2010 to 2012 for the city and the school district, or nearly 7 percent of total city property and business tax revenue.

A decade earlier, the city's forgone revenue came to an inflation-adjusted $14.9 million per year, Pew found, or just under 1 percent of all property and business tax revenue.

In the industry specific tax exemption area, the study found that Philadelphia has seven programs. These specific sector tax breaks resulted in at least $106.2 million in forgone revenue each year from 2010 to 2012.

The good news for Philadelphia here is that the later amount is 18 percent less than the $129.6 million exempted (and inflation adjusted) tax money in 2001 to 2003.

Pew also found that while Philly's tax exemptions for finance, insurance and utilities are similar to those in many other cities, it's tax break for port-related businesses is unusual, even among cities that have ports.

Tough math = tougher decisions: All this data brings up back to our opening question. What's the cost?

Pew researchers came to the same conclusion as most who have questioned (and still do) the value of business tax expenditures.

"Determining whether business tax expenditures achieve their goals is difficult," says the state-focused nonprofit. "There is no question that there have been benefits, notably in terms of jobs created and buildings constructed. The issue is whether those benefits outweigh the costs."

That's a question that Philadelphia and other cities and even nations must examine and answer.

The newspaper also agrees with the Pew recommendation that Philadelphia and other cities providing tax breaks to businesses regularly assess the effects of these tax deals.

Such self-scrutiny likely will show that some tax breaks, popular with both businesses and the politicians who created them, aren't working. But that revelation would be good.

City officials then could take the steps necessary to make the appropriate fiscal adjustments so that Philly and other cash-strapped cities (and states) could get their tax houses in order and move toward stronger financial foundations.