I'm raising my third cup to celebrate National Coffee Day. I must admit, though, that I tend to follow my grandmother's tastes when it comes to this caffeinated beverage. Like her, I prefer a little coffee in my milk. 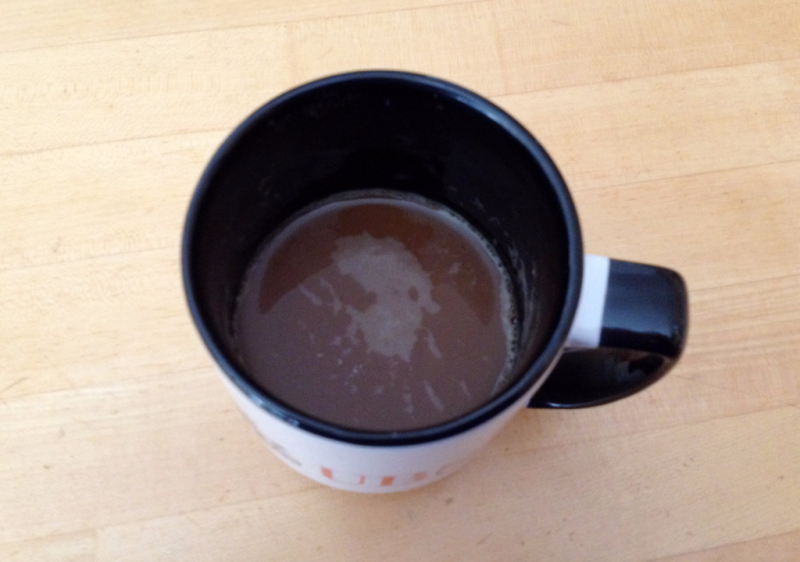 A bit blurry because I hadn't had enough cups o' Joe before I took this!
And that apparent facial profile in the cup is totally accidental!

But even drinking what hardcore coffee aficionados consider a diluted drink, it's enough to keep me going as I read, research, write and blog about taxes.

And that's fitting, since coffee does indeed have some tax ties.

Early American coffee taxes: Let's start with the formation of our nation. The United States began in part because of tea taxes, but after we obtained self-rule, our new leaders implemented duties on tea and its companion beverage coffee.

The beverage tariffs had been created to raise money for the young country, as noted by Secretary of the Treasury Alexander Hamilton. The $10 Founding Father wrote in his 1790 report on public credit:

"The Secretary conceives that it will be sound policy to carry the duties [on wine, spirits (including those manufactured within the United States), teas, and coffee] as high as will be consistent with the practicability of a safe collection [of revenue]."

The revenue-raising duties on coffee and tea stuck for quite a while. It wasn't until 1872, as reported by the Chicago Tribune on May 3 of that year, that the coffee and tea taxes were struck from the early tax code. 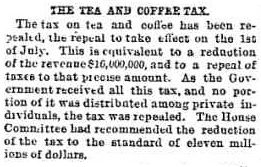 The end of the caffeinated beverage duties were part of overall tariff reform during that era, which included a 10 percent across-the-board reduction in protective levies. As part of this process, the duties on coffee and tea were eliminated, notes The Tax History Museum, because their sole purpose, as Hamilton wrote, was revenue generation rather than protection.

Over the years, coffee drinkers have complained about improper sales taxes on their purchases at chain restaurants.

In 2013, some New Jersey Dunkin' Donuts customers complained that they were wrongly taxed, or not taxed, on different coffee items at their local shops.

Subsequently, some Garden State residents, along with their neighbors in New York, tried to file a class action lawsuit against the popular pastry and coffee company claiming they were charged New Jersey and New York state sales taxes on purchases of nontaxable bottled water and packaged coffee.

The Superior Court of New Jersey ruled that the corporate offices of Dunkin' Donuts could not be named as a defendant in the suit since each franchisee is individually responsible for setting prices and collecting taxes.

The doughnut and coffee seller's corporate attorneys are using the New Jersey ruling in their fight against another potential class action lawsuit filed in Illinois District Court that accuses Dunkin' Donuts of tax overcharges on bulk coffee sales in that state.

Coffee cup taxes, too? And then there's the matter of the coffee containers.

There's been talk, but no action yet, of a possible tax in the United Kingdom on unrecyclable, plastic-lined paper coffee cups.

That tax possibility grew out of comments earlier this year by U.K. Environment Minister Rory Stewart, who in reply to a question from a Member of Parliament, said:

"It's a huge problem and there are tens of millions of these things being produced and thrown away.

"As you have pointed out, many of these things cannot be recycled either by the way they're disposed or because of the composition of the cup.

"Having tackled plastic bags, which I hope everybody in the House would agree the plastic bag tax has been a success, coffee cups seem to be a very good thing to look at next."

Stewart's office, however, was quick to point out that there are "no plans" right now for  for a coffee cup tax.

So far the cups, which are stamped with "recyclable" logos despite problems actually doing that, remain tax free. But don't be surprised if such tax talk does get revived in Great Britain, as well as on this side of the pond.

Coffee Day deals: Meanwhile, if you purchase your coffee rather than brew it yourself, there are some deals out there on this National Coffee Day.

They include, among myriad offers, free drinks at Krispy Kreme, reduced-price beverages at Dunkin' Donuts and donations to coffee growers if you buy a cup at Starbucks.

Enjoy! And make sure you check your receipt for the correct sales tax charge.