Embattled Internal Revenue Service Commissioner John Koskinen this week met with House Republicans who want him out of his job. 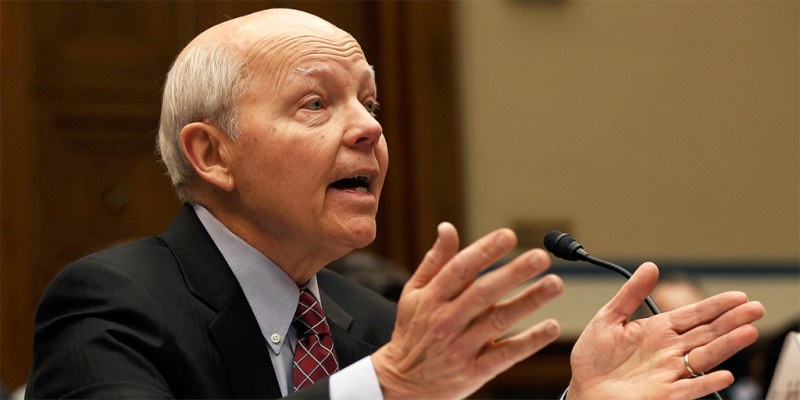 He also received additional support from outside groups that wrote House leaders detailing why they believe that impeaching Koskinen is a bad idea.

However, it looks like the final decision will be made by the full House sometime this month.

And while House Speaker Paul D. Ryan (R-Wisc.) has shown little enthusiasm for the action against the IRS chief, he now indicates that he will defer to the chamber's rules.

Earlier this week, the GOP House leadership had expressed a desire to let the process proceed under what is known as regular order. In that case, the committees that have jurisdiction over the matter would take charge, rather than bringing it before the full House.

"This is a privileged resolution. So it will come to the floor. This is something where Congress is going to work its will," Ryan said during a news conference on Wednesday, Sept. 7, noting that there members on both sides of the issue.

How quickly that working of an angry GOP segment will arrive remains to be seen. Republicans plan to meet in conference next week to decide on a strategy for impeaching Koskinen.

"We haven't decided exactly when, but we are going to do it," said Fleming. "And whether or not it's before or after the conference, I couldn't tell you."

Personal plea by the commish: Koskinen had hoped to stave off the extreme action by meeting this week with members of the moderate Tuesday Group and the more conservative Republican Study Committee.

Another House group, the Tea Party affiliated Freedom Caucus, also is adamantly calling for Koskinen's removal. It wasn't on the commissioner's meeting schedule.

The meetings were private, but Koskinen wanted to make his case for moving the impeachment articles through regular order. The commissioner's arguments reportedly centered on the need for due process and his ability to present his side. He would be able to do that under further committee investigation, but not once the matter goes to the House floor.

Some members apparently were convinced, at least a little, especially with regard to the due process issue.

Others viewed Koskinen's latest request to further discuss his role (or lack of) in the IRS Tea Party targeting scandal, during which conservative groups complained that their applications for the favorable 501(c)(4) tax-exempt status were slowed because of their political leaning, as disingenuous.

Koskinen foes contend that Congressional subpoenas were ignored. They also point to the commissioner's decision to skip a chance to testify about the allegations against him at a House Judiciary Committee hearing in May. At the time, Koskinen cited a scheduling conflict.

More outside support: In addition to the informal face-to-face House sessions, Koskinen also got support from two more groups.

"We are concerned that the effort to censure or impeach Commissioner Koskinen will hasten the deterioration of the voluntary compliance system that is the cornerstone of our taxing structure," the NSA leaders wrote.

"The lack of respect for the IRS shown by such an effort, especially when coupled with the significant budget cuts enacted over the last several years, is already apparent as evidenced by the numerous taxpayers who ask NSA members why they should pay their taxes when the IRS does not have the ability to audit them."

Constitutional concerns: Another communication this week to Ryan and Pelosi from a group of constitutional lawyers outlined those scholars' concerns.

Calling the proposed resolution "an unprecedented rush to judgment that is contrary to the Constitution's original meaning and structure," the 14 attorneys argue that the action "will seriously injure our constitutional system."

"Even assuming that it might conceivably be appropriate for the House to impeach a subordinate executive branch official, such officials should be impeached, if at all, only in truly extraordinary circumstances," the letter continued.

The current charges, however, do not meet that standard, say the attorneys, and therefore "set a precedent that is fundamentally at odds with both our constitutional structure and deeply rooted traditions."

Senate not expected to concur: Whether Koskinen's opponents will be swayed by his personal pleas and/or the latest (and earlier) anti-impeachment letters remains to be seen.

But even if the House does vote for impeachment, the required Senate follow-up likely won't happen.

"That doesn't have even the slightest chance over here," Senate Finance Chairman Orrin Hatch (R-Utah), who opposes impeaching Koskinen, told Politico. "I'm not sure it's a wise thing to do before the election."

At least some of his House GOP colleagues, however, think an IRS commissioner impeachment message is just the one they want to take to potential anti-tax agency voters on Nov. 8.