A group of Republican lawmakers is expected to resume efforts to impeach the Internal Revenue Service commissioner, despite the ambivalence of the House Speaker and outright opposition of some tax law professors. 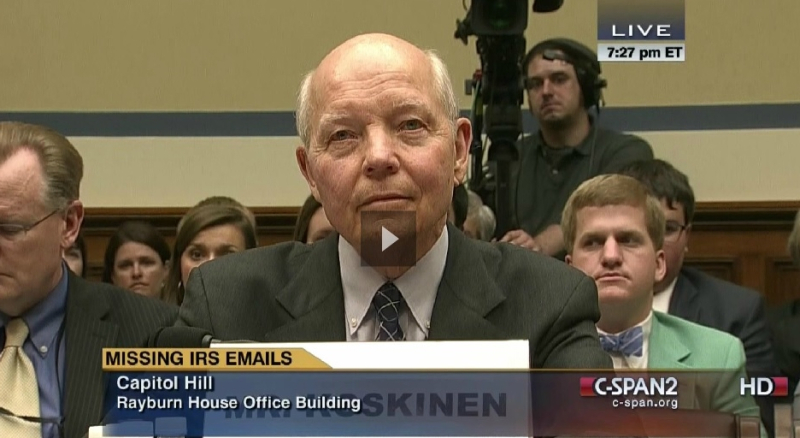 IRS Commissioner John Koskinen during one of the many House hearings where he's been called to testify.

Continual GOP target: IRS chief John Koskinen has been in the crosshairs of the House Oversight and Government Reform Committee for more than a year.

The action, led by Oversight Chairman Jason Chaffetz (R-Utah), has been spurred by the ultra-conservative House Freedom Caucus and lingering fallout from the Tea Party targeting tax-exempt organization scandal.

Chaffetz and 20 of his colleagues in July 2015 wrote to the president asking that he fire Koskinen. When President Obama blew off that request deferred, they moved to impeach Koskinen.

This procedural maneuver required House action within two legislative days. Since that deadline was missed, Fleming and Huelskamp would have to give notice again to force a vote.

If, as expected, that happens, the GOP House leadership could hold a vote to table the bill, refer it to committee or vote on the impeachment issue.

Ryan's resistance: None of those prospects is very appealing to House Speaker Paul D. Ryan (R-Wisc.), especially as the Nov. 8 election date nears.

While Ryan has expressed his support for efforts by Chaffetz's committee to ensure that the IRS does its job of fair and effective tax law enforcement and collection, he is not so sure about the impeachment effort.

"Yes, I think this is an agency that has not been led well and this is an agency that needs to be cleaned up," Ryan said during a weekly news conference earlier this year. "As far as these other issues, look, what I think what we need to do is win an election, get better people in these agencies and reform the tax code so we’re not harassing the average taxpayer with a tax code that they can't even understand."

Law profs protest: Ryan recently got some support for his desire to avoid an impeachment vote. In late August, more than 100 tax law professors sent a letter the House Republican and Democratic leadership, as well as the House Ways and Means Committee, protesting any votes on Koskinen's censure and impeachment.

The 123 tax law professors say in their Aug. 28 letter that they have seen nothing that "provides any basis for impeachment or censure" of the IRS commissioner.

The signatories also commend Koskinen for taking on the IRS job at a time when the agency was in turmoil during the investigation into the 501(c)(4) tax-exempt application process.

"Commissioner Koskinen was called out of retirement when the IRS needed help, and responded for the simple reason that it was the time for all good citizens to come to the aid of their country," according to the letter.

Hampering tax enforcement: In addition, argue the law professors, action against Koskinen also could have lasting, and detrimental, impact on the nation's tax laws.

*Koskinen was confirmed as IRS commissioner in December 2013, replacing IRS Commissioner Douglas Shulman, who left that position in 2012. Two acting commissioners, Steven T. Miller and Danny Werfel, each of whom served for less than a year before Koskinen took the job.

"Impeachment or censure would also set a dangerous precedent and deter talented people from working to improve the country's struggling revenue system," the letter said.

Hindering tax reform efforts: Plus, the tax profs say they are concerned that continued "targeting [of] Commissioner Koskinen will distract the Congress from the vital work of enacting meaningful tax reform. Academics, practitioners, and businesses agree that we must revise our revenue system to rationalize and simplify the rules, and to minimize the collateral costs of raising the necessary revenue."

The law professors' letter follows a similar one sent a month earlier to the same group of House lawmakers.

That previous communication, dated July 13 and sent "on behalf of the Officers and the Board of Regents of the American College of Tax Counsel," says that the impeachment actions "are not commensurate with the alleged conduct" of Koskinen. Further, notes the ACTC letter, impeachment efforts likely "will damage the agency at a time when it needs strong leadership."

It's apparent that Koskinen foes disagree with the law professors. But the GOP leadership just might take the advice of counsel and avoid, at least for now, impeachment of Koskinen.