Personal note, Saturday, June 10, 2017: Batman has always been my favorite comic book superhero. While I love the Caped Crusader's dark history and how it is reflected in his crime-fighting style, when I was a kid Batman was pure fun thanks to the character's TV portrayal by actor Adam West. On this sad day that I learned of Mr. West's passing on June 9, I realize that Batman came with me from those joyful childhood "Bam" and "Ka-Pow" graphic days of diversion into my mostly more serious adult tax world. Thanks for always being there when I needed you, Batman, and RIP my first Batman, Adam West.

No need to display the bat signal. All fans of the Dark Knight already know that today is Batman Day. Yes, it started and still is a marketing gimmick for DC Entertainment, but Batman, who first appeared in Detective Comics #27 in May 1939 and got his own pulpy publication series the next spring, also is a pop culture touchstone now celebrated with an annual celebration day.

And yes, there are some tax connections beyond just the sales tax most of us pay on our comic book -- sorry, graphic novel -- purchases.

Cinematic savings: Although "Batman vs. Superman: Dawn of Justice" got tax breaks from several states where the less-than-box-office-blockbuster was filmed, most of the film's tax credits were courtesy of Michigan.

And the $35 million in film maker savings from the Great Lakes State was a key reason Michigan lawmakers decided in 2015 to end the tax break.

"It's Batman versus Superman, versus road repairs, income-tax relief or any number of other priorities for Michigan families and businesses," said Annie Patnaude, deputy state director for the Michigan office of Americans for Prosperity, the Koch Brothers funded conservative political advocacy group.

Collectible tax rate: If you're lucky enough to one day own the very first Batman comic book, you'll owe capital gains tax on any profit you make when you decide to sell it to another Caped Crusader fan.

Note, however, that while the capital gains tax rate for most folks is 20 percent, it's a tad higher for collectibles. Items deemed to be of special value for particular fans are taxed at 28 percent. 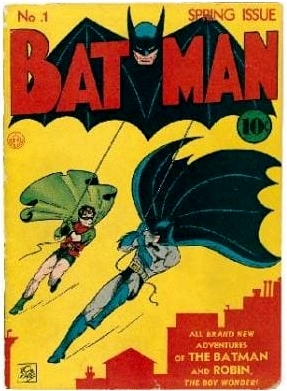 And you'll need to find a wealthy buyer.

If you happen to own the very first comic in which Batman appeared, a year earlier as a character in Detective Comics No. 27, you'll need an even wealthier buyer.

Batman's other tax breaks: Tax professionals regularly get in on the Batman tax act.

Back in 2014 when Batman turned 75, TaxAudit.com took a look at what bat-deductions the crime fighter uses to battle big Internal Revenue Service bills.

They included such things as Batman's alter ego billionaire industrialist Bruce Wayne claiming the more tax-advantageous filing status of head of household since he took Dick Grayson, aka Robin, as his legal ward.

Then there are the annual property tax payments on Wayne Manor, an enormous fortress outside Gotham City.

"Batman's family has owned the home for generations, which means Batman isn't likely to be paying tax-deductible interest on a mortgage," notes TaxAudit. "However, he can deduct an unlimited amount of property tax he pays on the home and grounds, including the Batcave."

Also, notes the tax website, don't forget the solar panels Batman installed after the mansion was damaged in an earthquake. They qualify for a 30 percent solar investment tax credit.

And don't forget all those wonderful gadgets Batman uses to fight crime since he doesn't have any super powers. Those devices also help him fight taxes as their invention and production qualify for research and development tax credits and domestic production activity deductions!

Taxing story lines: When Batman made it to the small screen, taxes also made it into some of the TV show's plots.

In "The Ogg and I," Batman villain Egghead and Olga, Queen of the Bessarovian Cossacks, teamed up to kidnap Commissioner Gordon. In exchange for his safety, they demanded a 10 cent tax for every egg eaten in Gotham City.

There's also the time that taxes literally animated another Batman villain, the Joker. 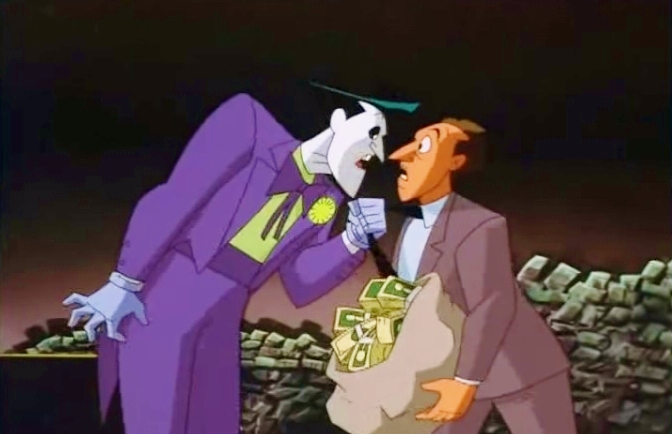 The Joker is not happy with his big tax bill. Click image to watch the YouTube clip of the villain's tax travails.

In "The New Adventures of Batman" cartoon series that ran on CBS in 1977, the Joker admits that he's more afraid of the IRS than Batman, so the prankster grudgingly agrees to pay a $137 million tax bill.

Batman fan tax fiction: The conversion of the internet and fandom spawned the new online quasi-literary genre of fan fiction.

Taxes and Batman meet in one such tale.

Zangito's "Batman and Taxes" recounts how Bruce Wayne faced the dual threat of financial crime and one of life's terrifying certainties.

The story starts with a Wayne Enterprises' accountant embezzlement of millions.

Spoiler alert: The Dark Knight, with always reliable Alfred's help, bests the company thief and gets his taxes to the IRS on time, too!

A real Batman's tax fight: Finally, there was the time that a real-life Batman took the IRS to court over a partnership tax issue.

In Batman v. Commissioner (that's the IRS Commissioner, not Commissioner Gordon), Ray Batman tried to convert his farm near the Texas Panhandle town of Perryton into a family partnership by transferring some of its assets to his teenage son.

A three-judge panel of the U.S. Fifth Circuit Court of Appeals in 1951 unanimously affirmed the decision of the U.S. Tax Court that disallowed Batman's tax entity move.

In the original ruling that the appellate panel upheld, the Tax Court judge found that there was no real desire by the younger Batman to be his father's partner. Although he had been doing a fair share of the farm's work, the Tax Court determined that the father had taken all the steps to make his son a partner with the sole purpose being an attempt by the elder Batman to reduce his individual tax liability.

The Joker obviously was correct in his fear of the IRS. This tax case is one of the few times that any Batman lost a fight.