$10,162. That's how much of a federal tax refund that Republican vice presidential nominee Mike Pence and his wife Karen received on their 2015 tax return. 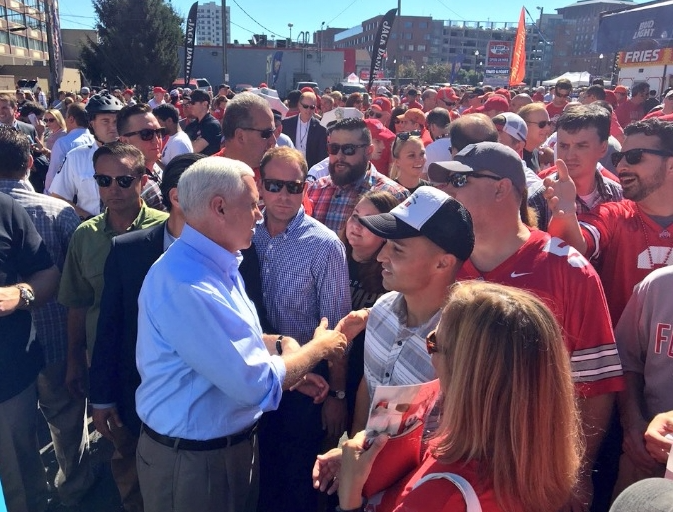 Since the Pences' refund is almost four times the amount of the average tax refund of $2,732 (per Internal Revenue Service filing data through May 13), the $10,162 that the Pences are getting back from Uncle Sam also earns this week's By the Numbers honor.

So how did the Indiana governor and his wife get such a big refund? Here's a quick look at their 2015 federal Form 1040.

Most of the couple's income came from Pence's salary of $109,807 as Indiana's governor. He also received $8,996 in taxable pension benefits and $181 in interest income.

Some of those earnings were offset by losses on Mrs. Pence's business endeavors. Her "That's My Towel" beach towel identifier charm business was out $3,407 last year. She also reported another loss of $51 on her efforts as a watercolorist.

To get to that amount, the couple took one above-the-line deduction (aka officially an adjustment to income) of $2,500 for student loan interest.

Getting to lower taxable income: On the flip side of their 1040, the Pences show:

That helped trim their AGI to a taxable income amount of $81,492.

Then they claimed total regular and refundable American Opportunity Tax Credit amounts of $5,000 for daughters Audrey's and Charlotte's expenses at Northeastern University and DePaul University, respectively.

Itemized items: The Pence's 2015 Schedule A shows that they paid Indiana state income taxes of $6,502 and personal property taxes of $109.

The couple gave $8,923 to charities, most of that as cash/check donations, but they didn't release any details on which nonprofits got their contagions,

Like many taxpayers, the Pences paid for professional tax preparation help. That amount was $665.

But since the tax prep fee was the only miscellaneous expense that Indiana's first family claimed on their Schedule A, it was well below the 2 percent of AGI threshold and therefore couldn't be added to their itemized deduction amount.

Total tax bill: The Pences' final tax liability last year was $8,956. Thanks to over withholding, they ended up with the $10,000+ refund.

Like a growing number of taxpayers, the Pences e-filed and asked the Internal Revenue Service to directly deposit their refund amount, in their case into a checking account.

Pence’s 2015 income is much less than the $10.7 million reported by Democratic presidential nominee Hillary Clinton and her husband former president Bill Clinton.

The Pences also made less than the $313,441 reported by Clinton's VP pick Sen. Tim Kaine and his wife Ann Holton.

Fewer zeros than Trump's taxes: As Pence predicted when he said he would release his returns, his Form 1040 and accompanying forms and schedules were routine.

The GOP veep candidate also said the big difference between his taxes and that of his Party's presidential nominee Donald Trump is that The Donald's 1040 has a lot more zeros.

I know Pence meant zeros after other numbers, but Trump's refusal to share his tax returns has many, including me and late-night comic/TV host Seth Meyers, speculating that the self-proclaimed multi-billionaire doesn't really make that much money.

Clinton's campaign thinks Trump's reluctance to share his taxes also might hide other things, such as financial ties to Russia, whose president Trump often praises.

Still waiting on the audit to end: In a statement accompanying Pence's tax return, the Trump campaign said the release of his veep's taxes was being made with the "full support of Mr. Trump, who plans to release his tax returns upon the completion of a routine audit."

Candidates are not required to release their tax returns, but if Trump fails to disclose his before Nov. 8, he would be the first major-party presidential nominee not to do so in four decades.

And despite Trump's protestations that Americans really don't care about his taxes, a recent Quinnipiac University survey found that nearly three-quarters of likely voters, including 62 percent of Republicans, want Trump to publicly release his returns.