Music and tax fans have heard by now that rapper Nelly is in big tax trouble.

Many have rallied to help the St. Louis rapper. But it's not just Nelly's fans who are coming to his aid as he deals with a $2.4 million Internal Revenue Service tax lien. 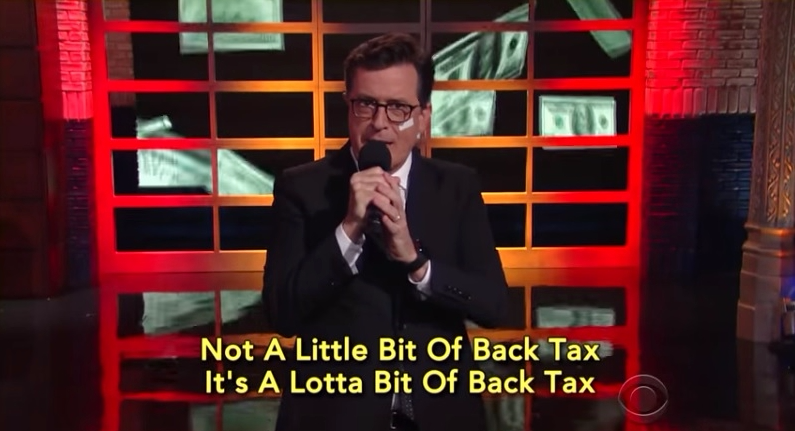 Stephen Colbert offers rapper Nelly some tax advice in "Debt in Herre," a parody of the singer's hit "Hot in Herre."
Click image to view full video on YouTube.

Most notable is Stephen Colbert. The "Late Show" host, with help from his accountant Wendy, rewrote the lyrics of Nelly's hit "Hot in Herre" to offer the singer-songwriter some fiscal and tax advice.

Business expense deduction: Among the new lyrics performed by Colbert, complete with a Nelly-like cheek Band-Aid, is this tax suggestion:

"You wear them at your work,
so write off all your clothes.
They're a business expense,
so you can write your clothes off."

That actually may be true, as long as the attire is performance specific. It worked for Abba.

Get tax help ASAP: But rather than rely on the advice of Colbert and his perhaps created for comic effect accountant, Nelly needs to talk to a real tax professional about ways to settle up with Uncle Sam and the Show Me State.

That's good advice for everyone, not just celebrities, who finds themselves in tax trouble.

And do so as soon as you realize you've got tax issues. The longer you wait, as Nelly can attest, the more you'll end up owing.

Corden adds to royalty income: In addition to Colbert's lyrical tax advice, his CBS colleague James Corden also did his part this week to help out Nelly.

Nelly's fans have launched a plan to help him get money to pay his tax debts by streaming his songs. One calculation is that with Spotify paying artists 6/10ths of 1 cent per a song's online play, they need to listen to his songs at least 402,880,500 times.

Corden, a Tony Award winner for his Broadway work and creator of the popular Carpool Karaoke on his "Late, Late Show" that follows Colbert, noted that he was big fan of Nelly's work.

So he did his part by repeatedly playing his favorite "Hot in Herre" for one night.

Corden said the clip plays should net Nelly around 20 cents, but every bit helps when you're trying to dig out of tax debt.