Donald J. Trump has rewritten a lot of rules so far this presidential election season. Today, however, he learned one of the old ones when it comes to taxes.

Sometimes you have to compromise. 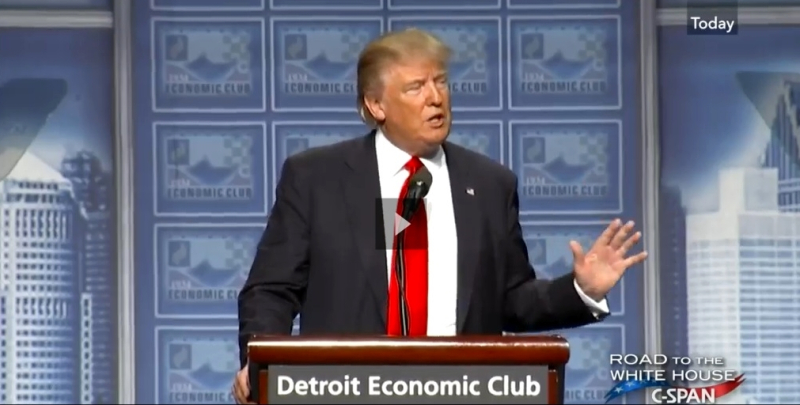 Zero tax rate zeroed out: In a speech today at a packed Detroit Economic Club, the Republican presidential nominee presented a glimpse of his economic plan, including some changes to his tax proposals.

The Donald promised back in September 2015 when he was battling 16 other GOP White House hopefuls that folks making $25,000 or less would have a 0 percent tax rate if he got into the Oval Office.

The table below shows the income ranges that Trump Tax Plan I would have covered.

Now, however, Trump has been forced decided to go along with the House Republicans' tax reform plan released in June.

Fewer brackets, higher rates: The GOP document, officially titled "A Better Way: Our Vision for a Confident America," calls for just three tax brackets, but they mean more taxes for the lowest and highest earners.

The House plan, or Trump Tax Plan II as I'm calling it, has rates of 12 percent, 25 percent and 33 percent. The table below breaks down the income levels, using tax year 2016 inflation adjusted tax brackets now in effect.

House Republicans swear that their plan's larger standard deduction would mean that most Americans in the 12 percent bracket would still pay no taxes. But most is not the all that The Donald had proposed.

The taxpayers at the other end of the income tax spectrum also will pay more under Trump Tax Plan II with its top tax rate of 33 percent, or eight percentage points greater than his initial proposal.

But they shouldn't complain. A top tax rate of 33 percent is still substantially less than the 39.6 percent they pay now on ordinary income.

Political expediency: So why did Trump change his tax plan? Two reasons.

First, from a political standpoint Trump consolidates his Party unity message by acquiescing to the House's tax plan, which has House Speaker Paul D. Ryan's fingerprints all over it.

Ryan, as the GOP's budget guru, wrote many similar fiscal tomes when he was chairman of the House Budget Committee. And he served as chair of the tax-writing Ways and Means panel before accepting the Speaker's gavel.

Trump, by indicating his support today of the House tax plan, doubles down on his support of Ryan, whom he finally officially endorsed over the weekend in his GOP Congressional district primary fight.

Fiscal pressure, two: Then there are the dollars lost.

Trump Tax Plan I would cost the U.S. Treasury around $10 trillion over 10 years according to most estimates, including on the Republican side. Some put the decade-long deficit cost at $12 trillion.

But Trump Tax Plan II, which no doubt was tweaked at the urging of his new economic advisers (including six Steves and no women…), will cut that deficit amount to $3 trillion when dynamic scoring is used. This an economic calculation method that takes into account projected economic growth that tax and other policy changes will produce.

So far, we don't have details on the tax plan and other issues Trump touched on in today's remarks. His campaign says that will be coming to the website soon.

Until then, though, we're stuck with the frequent Trump admonition "believe me" when it comes to how his revised tax and economic proposals will make, again Trump's word, America win, and win bigly/big league.

Thanks Kay! I just recently found your blog and think it is awesome! I'm a political geek interested in tax policy and how it affects both the election and people's wallets. So I will definitely become a reader of your work. Thanks

Tom,
Thanks for the request. Did my editor call you? :) I'm working on it, as well a story for Bankrate. Hope to get it out this coming week. Thanks for reading and keeping me on my toes!
Kay

I revisited your post from August, and was wondering if you would do an updated post on your thoughts on yet the newest revision of Trump's tax plan (Trump Tax Plan III?) from this week, specifically your analysis of his marginal rates. While he keeps the Trump II/House Republican rates, he changes the marginal brackets. So now Trump's plan has the 33% rate kicking in for income above $112,501 for single filers, where as you show above under the House GOP plan it did not kick in until $190,151. More significantly the 2015 IRS rates do not have a 33% tax rate kicking in until $189,301...so isn't Trump's plan actually a tax increase for many high earning singles? I've run the numbers through the brackets, and even with his expanded standard deduction it sure seems like single filers with gross incomes of roughly $145,000-445,000 will see a tax increase versus what their 2015 rates were (I just figured this assuming IRS standard deduction and personal exemption / Trump standard deduction would be taken).

I've seen zero analysis on this point about Trump's adjusted brackets, save for a tweet from one business/political reporter.