Trump vs. Buffett in proposed tax return throwdown
What part of The Donald's personal Form 1040 would you most like to see?

Warren Buffett is the third richest man in the world. He's also like a lot of us who are a whole lot poorer. 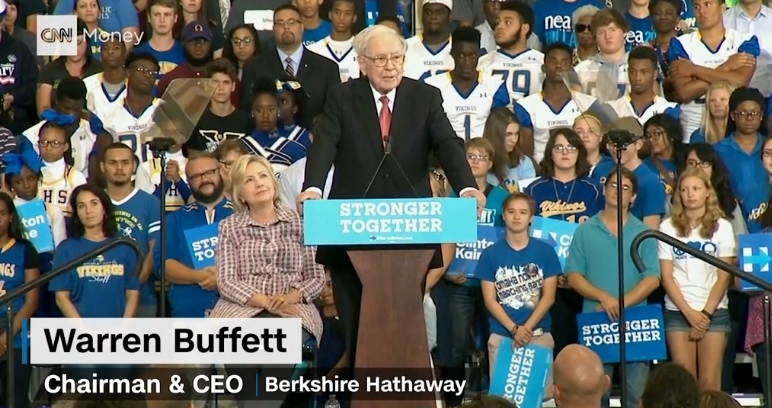 He's the third billionaire within a week to call on Trump to release his returns. Former New York City mayor and media mogul Michael Bloomberg and Mark Cuban, owner of the NBA's Dallas Mavericks and "Shark Tank" judge, also raised questions as to why Trump won't let us see his tax filings.

Billionaires' tax battle: During a Hillary Clinton rally in his Nebraska hometown Monday, Aug. 1, the Oracle of Omaha accused Clinton's Republican challenger for the White House of running scared when it comes to what his 1040s might reveal.

"You're only afraid if you've got something to be afraid about," said Buffett.

The 85-year-old billionaire -- he's worth more than $64 billion according to Forbes' 2016 analysis -- then challenged Trump to a literal showdown.

Buffett, the founder of Berkshire Hathaway Inc., noted that he, like Trump, is under Internal Revenue Service audit.

That tax examination is the excuse reason excuse that Trump is using to keep his tax data secret, although President Richard Nixon revealed his returns when he was under audit to show the American public that their leader was not a crook. Such tax revelations subsequently became part of the regular routine of presidential campaigns.

"I will meet him in Omaha or Mar-a-Lago or, he can pick the place, anytime between now and election. I'll bring my return, he'll bring his return," Buffett told the cheering crowd at the rally for the Democratic presidential nominee. "We're both under audit. And believe me, nobody's going to stop us from talking about what's on those returns."

Despite being called out by guys that Trump, a self-proclaimed billionaire, sees as his peers, the GOP White House wannabe apparently is blowing off Buffett's offer.

"I don't care much about Warren Buffett," Trump said during a televised phone call to Fox Business Network's "Varney & Company."

The questions continue: The mystery about what The Donald doesn't want us to see and the Buffett challenge immediately sparked conversation on Trump's favorite social media outlet, Twitter.

"What page/form/line would you be most curious to see on either or both's returns?" tweeted @J_D_P) on Twitter. 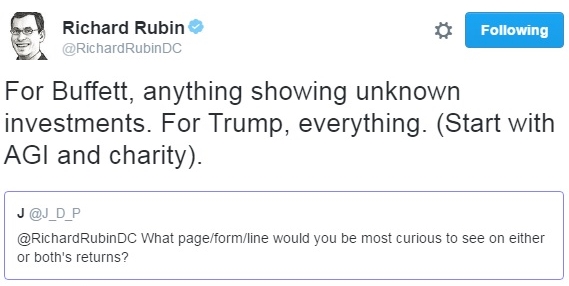 I want to see the AGI and what accounts for it. Is it all real estate related, or does he invest in other assets?

And, of course, I'd love to see all the legal tax-cutting techniques that Trump has told us he uses to pay the lowest possible tax bill.

Added audit eyes for the IRS: Those tax avoidance tactics -- which are not necessarily illegal -- presumably are among the things that folks speculate Trump is trying to keep secret.

They also would be of great interest to every tax professional out there.

"The nation's tax professionals might even detect tax fraud that the IRS might miss," writes a reader of The Atlantic, adding:

"Not to mention that if the tax professionals make their suggestions to the IRS privately, then there is the possibility of their earning an actual reward if as a result the IRS is alerted to something that leads to the IRS collecting more tax from Trump than the IRS would otherwise have done.

My own suspicion is that the ranks of the nation's tax professionals probably contain individuals, hostile to Trump or to tax cheats, who ARE aware of tricks the IRS has not yet suspected or at least fully caught up with (there are always new tricks) among taxpayers with really complex returns.

At a minimum, the IRS would have a greatly expanded army of volunteer auditors in Trump’s case!"

And yet more to ponder as we wait on Trump's probably-will-never-happen tax reveal.

Trump's taxes and more: It was the Democrats turn last week to name their presidential candidate, the aforementioned Hillary Clinton, and party down in the City of Brotherly Love.

During that event, Trump's taxes did come up a few times.

The Democratic National Convention and, coincidentally, Warren Buffett's tangential role in the political conclave, also played a part in my topics last week at my other tax blog.

As the Dems convened on Monday, July 25, I looked at the role Buffett and Bernie Sanders played in shaping the Party's official 2016 platform.

The Democratic platform also examines ways to deal with "crushing student debt." That topic was part of my July 27 Bankrate Taxes Blog post that discussed a Senate bill to exclude forgiven student loans from taxpayer income.

I usually post over at Bankrate on Tuesday and Thursday, but the timetable changed last week due to the Democratic convention. And catching up after that event is why I'm so late in letting you know about those other tax blog items.

My apologies. I'm back on schedule this week; yes, that means there's a new Bankrate Taxes post up today. But you'll have check back here over the coming weekend for its highlights. Or go there now to read it!