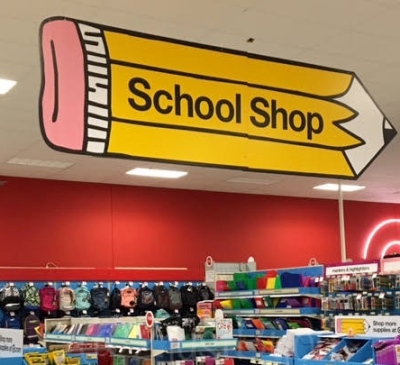 State sales tax holidays are wrapping up in 10 states today (Sunday, Aug. 7), but some shoppers could find they owe taxes anyway.

The tax-due buyers are the out-of-state folks who cross borders to pick up some ostensibly tax-free products.

And while the traveling shoppers don't hand over taxes at the time of purchase in the tax holiday locale, when they take the goods back to their home states, they likely owe a use tax on the items.

Ah yes, the use, or as I like to call it, useless tax.

Use tax usually ignored: As its name indicates, a use tax is assessed on an item purchased without paying your home state's sales tax but which you bring back to your home to use.

The use tax is a companion tax to a state's sales tax, which 45 states collect. A state's use tax usually is the same rate as its sales tax.

The illustration below by Avalara demonstrates how the use tax works.

Cross-border tax-free shoppers: North Carolina's tax collector is one who might be looking at potential use tax money this weekend.

Christian Boschult reports in Myrtle Beach, S.C.'s The Sun News/MyrtleBeachOnline that since the Tarheel State doesn't have a tax-free weekend this year, some of South Carolina's northerly neighbors have crossed the state line to shop.

Of particular appeal is South Carolina's tax-exemption this weekend of computers, computer software, printers and printer supplies. Even better, unlike in many sales tax holiday states, the Palmetto State doesn't impose a price limit on products eligible for the tax-free treatment.

"I'm looking for a laptop for college, and I figured the best time to look is now," Dylan Mehring of Pennsylvania told the S.C. newspaper. "I'm going to be doing editing which is all digital nowadays so I'm going to need a nice Mac so I have access to Final Cut and all the Adobe software."

And no, Mehring didn't make the 500± mile trek to Myrtle Beach just to shop sans sales tax. He already was vacationing there.

Tax due when you get home: But Mehring will owe the Keystone State's 6 percent sales tax on the computer etc. that he buys this weekend. The Pennsylvania Department of Revenue has produced a use tax brochure and one of its examples fits here:

A resident of Harrisburg drives to a neighboring state, purchases a $500 television on April 30 and takes the television back to Pennsylvania in his own vehicle. A use tax payment of $30 ($500 X 6 percent) is due by May 20.

Pennsylvania tax officials also try to make use tax payments easier by including the tax on the state's individual returns.

Since 2011, line 25 on the PA-40 Pennsylvania Personal Income Tax Return has asked Pennsylvania filers to report their use tax obligations. They can do so using the paper Form PA-40 or electronically by using PAadirectfile or Fed/State e-File.

Variety of ways to collect use tax: Other states also have included use taxes on their residents' annual individual tax returns.

Of the 45 states with sales and use taxes, 38 also have an individual income tax. Of these 38 states, according to an April 2015 policy brief by the Research Department of the Minnesota House of Representatives, 27 of those states in 2012 provided for taxpayers to report use taxes on their individual returns

Another six state tax offices provide information about the use tax in their individual income tax booklets. And here in Texas and the other states without personal income taxes, tax officials provide separate use tax returns at their official websites.

But even with all that explicit focus on use taxes, only around 2 percent of taxpayers nationwide reports use tax on their returns, according to the Minnesota study. Still, that's a bit better than the 1.6 percent use tax reporting and payment rate the same group found when it conducted the study a couple of years ago.

Although the states obviously are trying to get all the tax, sales an otherwise they are due, it's a difficult and often inadequate effort.

You can help out your state, though, if you're so inclined to be a good tax citizen by paying any use tax on those products you bought at a neighboring tax holiday sale this year.

I know, I know. But hey, a tax geek has gotta at least get the word out there.