States line up to be domestic tax havens for U.S. rich

Donald Trump's revised tax plan, which many economists and tax experts have decried as the latest version of Republican supply-side economics, is still getting a lot of attention.

The biggest criticism is that the tweaked tax proposal, despite Trump's populist spin, still gives ways too much to the wealthy.

Just who would win and exactly how much in the Trump vs. Hillary Clinton tax battle will continue to be debated (though perhaps not formally…) until Nov. 8. 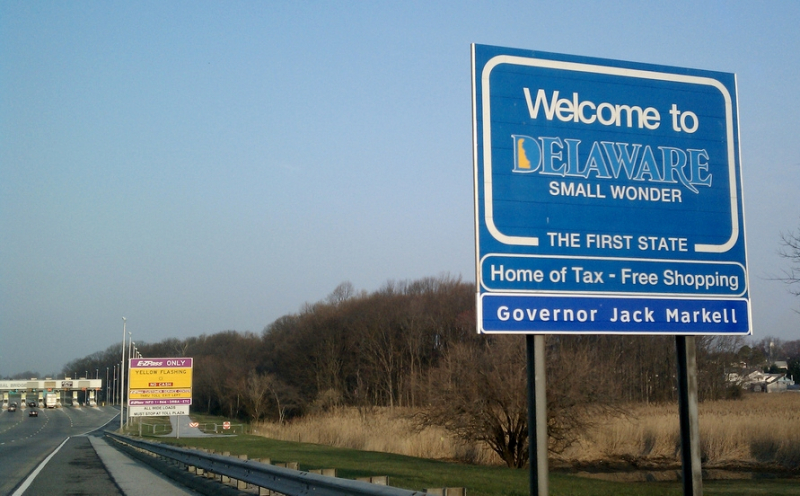 Delaware, considered by many to be America's top domestic tax haven, welcomes drivers and taxpayers looking to keep money out of tax collector hands. (Photo by Kevin Jarrett via Flickr)

Meanwhile, regardless of what happens on the federal level, some states are already moving to take care of the financial and tax needs of the very rich in the United States.

Increasing U.S. tax haven states: More states are seeking ways they can help shield the wealth of America's 1 percent, according to an article in today's New York Times. This includes protecting the moneyed class' wealth from creditors, divorcing spouses, their children, and some federal and state tax collectors.

NYT reporter Patricia Cohen notes that the federal government leaves it to each state to draw up its own trust laws. Under such broad parameters, several have tried to push the envelope as far as they can without crossing the line tax evasion line.

This task traditionally has been handled by offshore tax havens, such as the Cayman Islands and Switzerland. But Internal Revenue Service and Justice Department focus on international tax havens have shaken this rarefied wealth management sphere.

So several U.S. states have stepped in and stepped up specialty financial services to help bring America's wealth back home.

The clear wealth protection leaders, writes Cohen, are Nevada, Delaware, South Dakota and Alaska. But New Hampshire, Wyoming, Tennessee and Ohio are trying to catch up on ways to serve the ultra-wealthy's financial and tax needs.

Not illegal, just eyebrow raising: Let's be clear here. The techniques these states are allowing and financial practitioners are offering as wealth protection are not illegal at the state or federal levels.

But the actions, such as detailed trusts and elaborate estate planning, are seen by some as tax loopholes that need to be closed.

Such promises have been made generally by Trump and Clinton. Trump even appropriated the standard Democratic call to make sure the rich pay their fair share in his speech yesterday announcing his revised tax plan.

That language on the campaign trail can definitely energize the candidates' working-class crowds.

However, tax attorneys and financial advisers in the states catering to the special wealth management needs of America's richest residents are not as jazzed about such campaign calls. And they're betting, and hoping, that it's simply election year politicking.

After all, both Trump and Clinton have registered business addresses in tax-friendly Delaware.