Ezekiel Elliott's visit to a Seattle marijuana retailer was the big weed news this week, and yes, pot has received lots of headlines lately (more on this a little later). 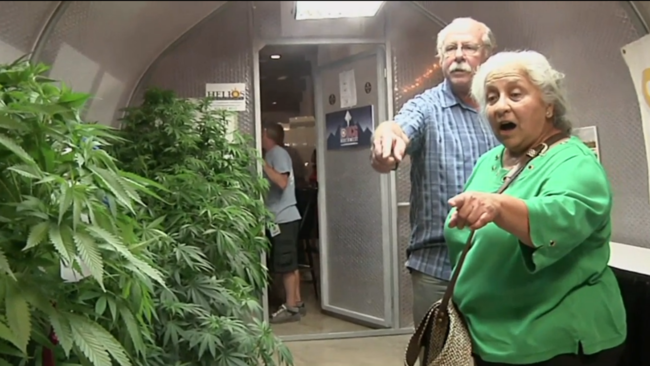 Apparently amazed visitors to the cannabis display at the Oregon State Fair in Salem, the first time pot plants have been open for public viewing at any U.S. state fair. This is just one piece of pot news so far this month. Click image to view the AP video via USA Today.

I admit that as a Dallas Cowboys fan, I spent an inordinate amount of time following the first-round draft pick's stop last week at a Seattle weed dispensary when the 'Boys were in Washington State for an NFL preseason match with the Seahawks. In Zeke's defense -- and my blind Cowboys' fan devotion -- he reportedly just made a touristy Looky Lou drop in at the pot shop and didn't buy any product.

But there also was some big tax-related marijuana news last week.

Oregon's big pot tax take: Washington's neighbor to the south, Oregon, reported that in the first six months of 2016 it collected $25.5 million in marijuana taxes.

That figure, released by the Oregon Department of Revenue, includes the start of marijuana-infused edibles sales. Since June 2, anyone age 21 or older has been able to buy a wide variety of pot-infused snacks, sweets and drinks.

Oregon revenue officials now anticipate that $43 million will be raised by June 2017.

That's four times the amount of money they originally projected would be raised by marijuana taxes. The hoped for $43 million also is this week's By the Numbers honoree.

Where will the Beaver State's new weed tax dollars go?

Based on the latest figures, around about $17 million, instead of the previously projected $4.5 million, will go toward the Common School Fund. Other Oregon pot-related dollars will be distributed to mental health and drug services, the state police, and city and county law enforcement services.

Marijuana tax appeal: The potential to bring in additional tax money is why more states are considering joining Washington, Oregon, Colorado and Alaska in legalizing and taxing recreational marijuana use. Washington, D.C. has legal personal weed use, too, but so far is prevented per federal legislation from taxing marijuana since it is still classified as a schedule 1 controlled substance.

In addition, 25 states, the District of Columbia, Guam and Puerto Rico also allow for comprehensive public medical marijuana and cannabis programs. Taxes are collected on medical marijuana transactions in most of these jurisdictions.

Another 17 states, including the football home of Zeke Elliot, allow for limited use of low-dose cannabis products, generally for medical or research purposes.

The map below from The Tax Foundation offers an overview of current and potential recreational marijuana laws and taxes. 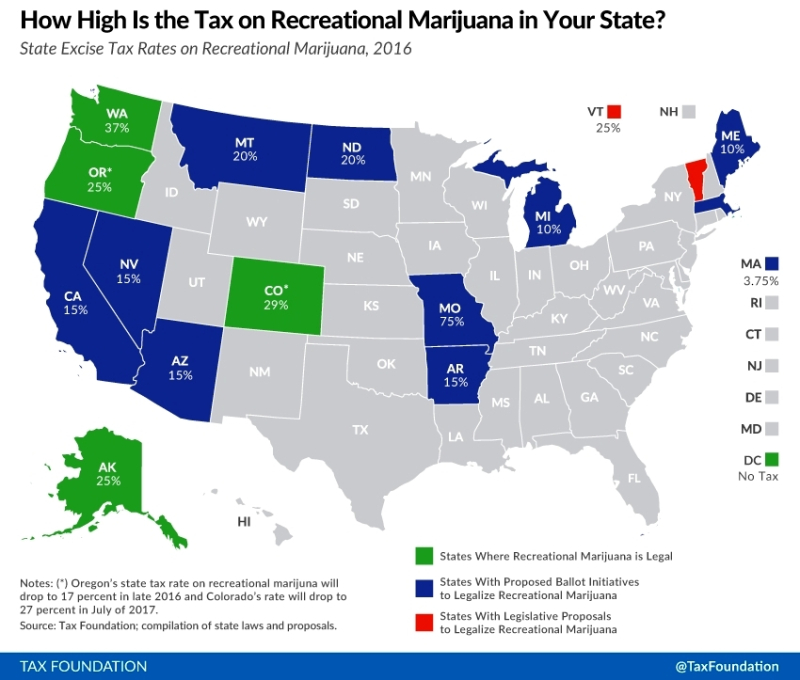 Ballotpedia also tracks referenda seeking voters' decisions on how pot, for personal or medical-only use, will be treated and taxed within their borders.

Some of those votes could be affected by yet another recent piece of marijuana news.

Federal government stays put on pot illegality: The Drug Enforcement Administration (DEA) and Department of Justice (DoJ) announced on Aug. 11 that marijuana, a schedule 1 narcotic, will remain illegal for any purpose.

The decision, in a letter published Aug. 12 in the Federal Register, means that states that allow marijuana for medical use (or legalize recreational use) are breaking federal law.

The ruling does, however, ease marijuana research rules to make it easier for institutions to grow marijuana for scientific study. The DEA currently authorizes a single pot growing research facility in Mississippi.

In our last bit of pot news this month (so far and we've still got almost a week to go), a federal appeals court in San Francisco said the DoJ cannot prosecute medical marijuana cases if no state laws were broken.

A three-judge panel of the 9th U.S. Circuit Court of Appeals ordered federal prosecutors to show that 10 pending cases in California and Washington state violated medical marijuana laws in those states before continuing with prosecutions.

DoJ attorneys had argues that although Congress has barred the federal law enforcement agency from spending money to stop states from regulating the use or sale of medical pot, it was still allowed to prosecute individuals who violate federal marijuana laws.

The judges said no. Medical marijuana-based prosecutions of individuals prevent the states from giving full effect to their own measures, according to the appellate panel.

DoJ can ask for the full 9th Circuit to hear the case or take it directly to the U.S. Supreme Court.

Time to make a national change: The various and varying state laws, along with the often conflicting treatment federal treatment on both legal and practical levels make for continued confusion.

I've smoked (and inhaled) pot in my day. To my mind, it's no more debilitating that the nationally legal and taxed wine or beer I occasionally enjoy.

Personally, I believe it's time for the feds to lighten up on pot and let adults make the personal decision as to whether and when to light up a blunt. Uncle Sam also should allow doctors and their patients make marijuana-related medical decisions.

And then the U.S. Treasury and state tax collectors would be able to add to their accounts through marijuana taxes.

What are your state's laws regarding marijuana use? Do you support legalization of pot in some or all instances? Do you think the potential tax collection is a good reason to make pot legal?

BONUS: Check out my Tumbling Taxes post on this topic, 'Legalize It' and then tax the legit marijuana sales, with it's video of Peter Tosh's "Legalize It."