Enjoy National IPA Day even with the tax on beer

Today is Thursday, but it's seemed like a Monday all day. I think it's time to take a break and, fittingly on this National IPA Day, chill with a cold brew or two. 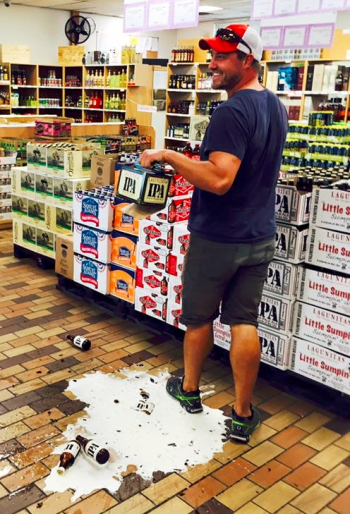 Oops! Not a good way to celebrate IPA Day.

It's been such a crazy IPA Day, I'm even willing to swallow the alcohol taxes that are added to adult beverages.

So what is National IPA Day? More to the point, what is IPA?

A brew's birth: Let's start with the second question. IPA is the acronym for India Pale Ale, a style of beer that is heavy on hops and which many say is a driver of the modern-day craft beer movement.

But IPA has been around for much longer.

The beer was developed in the 19th century, according to Smithsonian.com, to sate the thirst of the British Indian army, which was literally sweating it out in the subcontinent's equatorial heat.

The dark, heavy, porter that was popular in chilly London, just didn't cut it in the tropics. So a strong, pale beer that was loaded with hops and which could withstand the passage from England to India was born.

In January 1822, the Great Britain's India-based troops welcomed the pale, bright and strong ale whose hops provided a hint of home. The official name didn't show up, though, until 1829, when the first known use of the term India Pale Ale appeared in an ad in Australia's Sydney Gazette and New South Wales Advertiser.

Now there are three main styles of IPA: American-style IPA, English-style IPA and Double or Imperial IPA. Plus, there are subcategories of the beer, according to IPABeer.com, including Black IPA and hybrid IPAs such as Wheat and Belgian White.

What they all have in common is the taxes that are collected on them.

Booze taxes: Beer excise taxes are levied at both the federal and state levels.

Uncle Sam, via the Treasury Department's Alcohol and Tobacco Tax and Trade Bureau, collects $18 per barrel (that's 31 gallons per container) on beer. That comes out to 5 cents per 12-ounce can.

There's a reduced rate of $7 per barrel on first 60,000 barrels produced by brewers who make less than 2 million barrels. That's 2 cents per 12-ounce can. The tax then goes to the $18/barrel for any beer those small breweries make in excess of 60,000 barrels.

And in most cases, state and local sales taxes apply to alcohol purchases, too.

You can check out your state's beer tax amount on the 2016 updated list provided by the Federation of Tax Administrators.

Wine day, too: If beer isn't your potent potable of choice, then get out the stemware.

Aug. 4 is said to also be the birth date of champagne. And some calendars say it also is White Wine Day, which might have been created for folks who want to toast something without paying for a pricier bottle of sparkling white. But that's just my guess.

"Wait. Didn't we just have a wine day?" I hear you, all you careful readers who are wine aficionados. Yes, yes we did.

National Wine Day was on May 25. But today is specifically White Wine Day, as well as the celebration of Dom Perignon's invention back in 1693. So uncork that chardonnay or pop the top on that bottle of bubbly.

And if, like me, you're a red wine fan instead, don't worry. Our special day is coming. Red Wine Day is Oct. 15.

Lucky for all of us tax procrastinators, the convergence of wine and the last day to file our extended returns won't coincide. Oct. 15 this year is on Saturday, giving us Sunday to recover and get our tax returns ready to go to the Internal Revenue Service by Monday, Oct. 17.

IPA Day origins: Oh, yeah. I almost forgot and I haven't taken a sip yet, I swear! What is National IPA Day?

IPA Day, according to CraftBeer.com, "is not the brainchild of a corporate marketing machine, nor is it meant to serve any particular beer brand. IPA Day is opportunity for all breweries, bloggers, businesses and consumers to connect and share their love of craft beer. It is an opportunity for the entire craft beer culture to combine forces and advocate craft beer through increased education and global awareness."

So pull a bottle of your favorite IPA from your fridge or head on down to your neighborhood tavern and enjoy!