How you can help Louisiana flood victims

Almost 7 trillion gallons of rain in just one week across Louisiana produced the worst U.S. natural disaster since Hurricane Sandy in 2012. 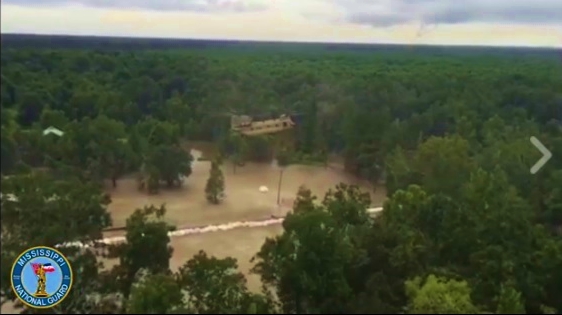 A Mississippi Army National Guard CH-47 Chinook helicopter delivers sandbags to the levee near the Elayn Hunt Correctional Facility in St. Gabriel, Louisiana, on Aug. 16, 2016. Click image to view the video and learn more about Mississippi's aide to its neighbor.

"This disaster is the worst to hit the United States since Superstorm Sandy, and we anticipate it will cost at least $30 million -- a number which may grow as we learn more about the scope and magnitude of the devastation," said Brad Kieserman, the Red Cross' vice president of disaster services operations and logistics.

Send monetary help: While there's been some political brush-ups over who has or hasn't visited the flood area or whether they even should right now, the Federal Emergency Management Agency (FEMA) is firm in its direction to us nonpolitical folks who want to help. 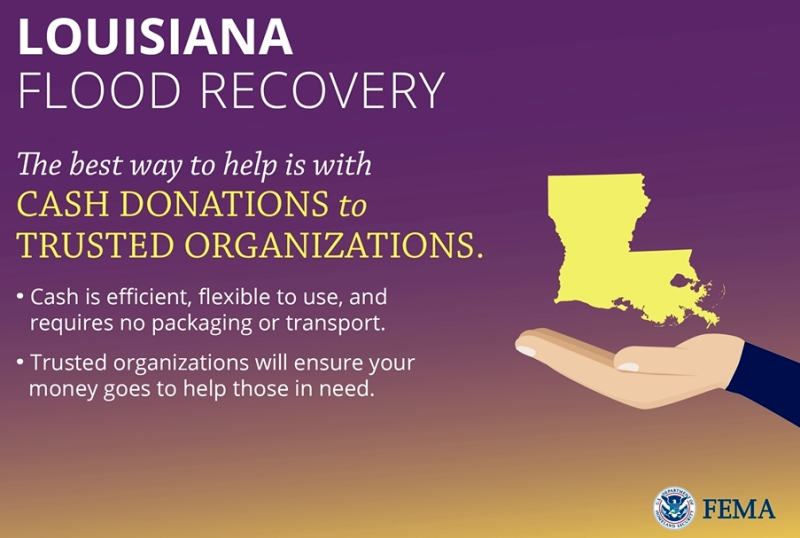 You can do so by contributing to the two major charities that are on the ground in the flooded portions of the Pelican State.

Many donation methods: The Salvation Army is working primarily out of its Baton Rouge facility, focusing on folks who were forced to evacuate their homes. The services there include providing meals at via mobile feeding units, as well as clean-up and hygiene kits.

Similarly, the American Red Cross in Louisiana is providing meals and shelters for residents who need a place to sleep. You can contribute at the organization's Louisiana region web page; clicking the "donate now" button there will take you to another page, where you can choose "Louisiana Floods" from that page's drop-down menu.

Check donations can be made by downloading and printing the group's donation form, completing it and mailing it to the address on the form. Again, designate on the form and check that you want your gift to go toward the Louisiana Floods relief efforts.

Additional charitable groups: You can find other Louisiana flood relief donation options in this MTV story. (Really. The cable music site is getting serious.)

More donation options are listed in these articles by Money, The Daily Beast, The Weather Channel and from folks close to the disaster, the New Orleans Times-Picayune.

While I know you're giving because you want to help out folks who've lost so much, as a tax writer I must remind you that your welcome help also might provide you with a donation tax deduction. OK. Tax note made. Done.

Direct help for those flooded out: And if you're a Louisianan who's sustained damage, I am so, so sorry.

Help also comes from the Internal Revenue Service, which has granted special tax treatment to folks in the Louisiana counties that were declaimed major disaster areas.