Another former IRS commissioner says Donald Trump can, and should, make his tax returns public

"I can't define tax evasion, but I know it when I see it," Fred T. Goldberg Jr. once said. 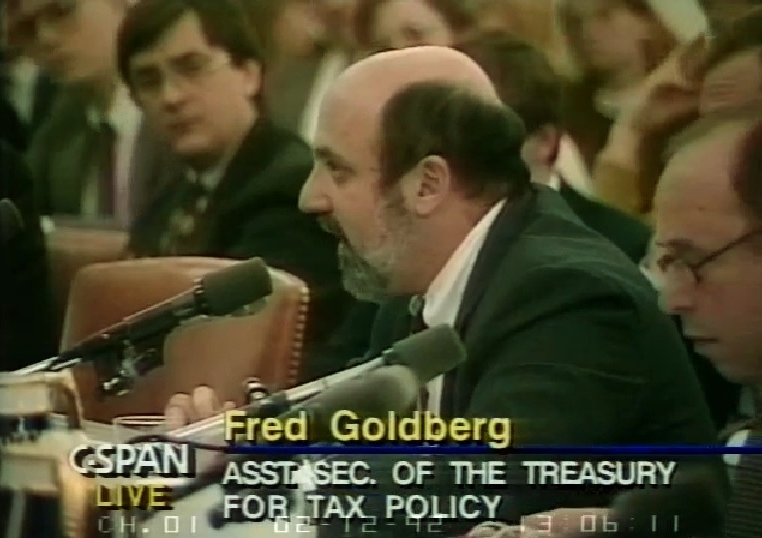 Fred Goldberg, in his capacity as Assistant Secretary of the Treasury for Tax Policy, the position he took immediately after leaving his IRS commissioner post, answers questions from the Joint Committee on Taxation in February 1992. (Click image to view the full video of the hearing via C-SPAN.)

Now I'm not saying that Goldberg, commissioner of the Internal Revenue Service from 1989 to 1992, was thinking about his adaptation of the legendary Supreme Court "I know it when I see it" assessment of pornography when he wrote an opinion piece this week (Aug. 23) about Donald Trump's taxes.

But I am saying it was the first thing that came to my suspicious mind when Goldberg, who was tapped to head the U.S. tax agency by President George H.W. Bush (who had his own infamous tax quote), said that the Republican presidential nominee has no excuse to not release his tax returns.

No taxes until after audits are done: After all, Trump and his campaign people keep saying that he's not showing voters any of his 1040s because he's under audit.

Those return examinations mean that some in the IRS think Trump is at least trying to avoid (which is OK if done legally), and possibly evade (not such a good thing), taxes.

"Tax returns paint a revealing picture of who we are," wrote Goldberg. To ensure that taxpayers voluntarily share their tax information with the IRS, he noted, we are assured that Uncle Sam will secure our data's confidentiality and our privacy.

"But nothing prevents us as taxpayers from choosing to release our tax returns — and those who aspire for the highest public office have done so for decades," wrote Goldberg.

Note the word nothing. Not even an audit. It's all up to the filer to make, or as in Trump's case not make, the filings public.

Trump has promised to release his returns when his audit ends. He also says he also is under continuous IRS audit. Conveniently, at least from a political perspective, that seems to preclude Trump from ever revealing these constantly examined filings.

I'm not the only skeptic thinking that.

"And by the way, for those who listen carefully, Trump's promise means he will never release his tax returns," Goldberg wrote.

What the 1040s could tell us: Goldberg says a person's tax returns, and the willingness to reveal them to the electorate, provide a window (for better and worse) into who the candidate is.

Folks wanting to occupy the White House have done so since the mid-1970s. Even a sitting president under audit, Richard Nixon, showed America his taxes.

Goldberg joins another former IRS commissioner, Mark Everson, in saying that nothing is stopping Trump from releasing his taxes.

But the word of those men who once were in charge of the IRS is not enough for Trump or his family.

Eric Trump today doubled down on his dad's refusal to release returns. It would be foolish for his father to release his tax returns and subject them to scrutiny by people without training necessary to know what the filings contain.

An audit-safe limited release: Goldberg, however, offers Trump some advice on just how to release his taxes without raising any additional audit concerns:

He can and should immediately release the first two pages of his Form 1040, along with his Schedule A, for the past 20 years. This would tell us how much he makes, how much he pays in taxes, and how much he contributes to charity.

Releasing this information would have no impact on any pending or future IRS audit of Trump. Zero. None. It is a risk-free first step with no downside.

Except for maybe showing voters he's not exactly the rich and generous guy he wants us to believe.