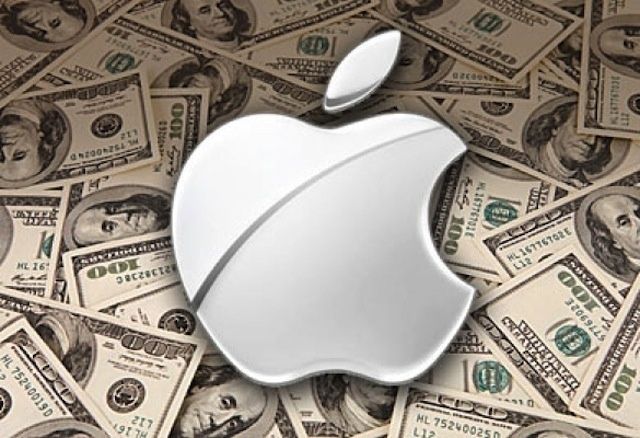 "This selective tax treatment of Apple in Ireland is illegal under EC state aid rules, because it gives Apple a significant advantage over other businesses that are subject to the same national taxation rules," according to the EC statement on the tax ruling.

"The Commission can order recovery of illegal state aid for a ten-year period preceding the Commission's first request for information in 2013," says the EC. "Ireland must now recover the unpaid taxes in Ireland from Apple for the years 2003 to 2014 of up to €13 billion, plus interest."

And so the international tax fight begins.

International businesses and taxes: Ireland's 12.5 percent corporate tax rate is one of the lowest in the world.

Apple CEO Time Cook has said the company will return its international operations to the United States only when its corporate tax rate, now 35 percent at the federal level, is more competitive.

So from that perspective, Apple's business argument is understandable.

But the EC contends that Apple sent all its European sales profits to Ireland and under a special arrangement paid nominal taxes on those profits from the continent. Then Apple, according to the EC, used the money taxed at Ireland's low rate to its United States facilities to fund research and development. 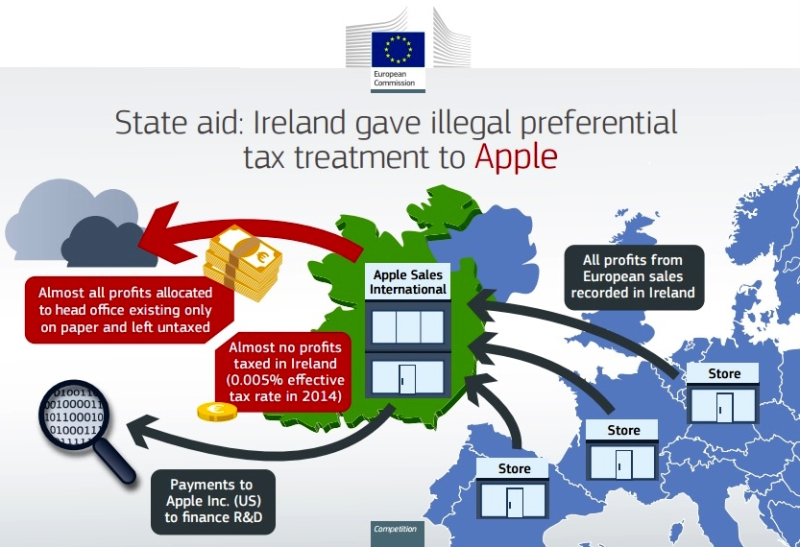 That special arrangement, according to the EC, was for "head offices" that "existed only on paper and could not have generated such profits. These profits…were not subject to tax in any country under specific provisions of the Irish tax law, which are no longer in force. As a result of the allocation method endorsed in the tax rulings, Apple only paid an effective corporate tax rate that declined from 1% in 2003 to 0.005% in 2014 on the profits of Apple Sales International."

Apple's response: Obviously Apple disagrees with the EC findings and plans to fight the ruling.

"At its root, the Commission’s case is not about how much Apple pays in taxes. It is about which government collects the money," says Cook said in a statement from Cook issued today entitled A Message to the Apple Community in Europe.

In that statement, Cook continues:

"The European Commission has launched an effort to rewrite Apple’s history in Europe, ignore Ireland’s tax laws and upend the international tax system in the process. The opinion issued on August 30th alleges that Ireland gave Apple a special deal on our taxes. This claim has no basis in fact or in law. We never asked for, nor did we receive, any special deals. We now find ourselves in the unusual position of being ordered to retroactively pay additional taxes to a government that says we don't owe them any more than we've already paid."

Cook also notes in the statement that, "Taxes for multinational companies are complex, yet a fundamental principle is recognized around the world: A company’s profits should be taxed in the country where the value is created."

Most of Apple’s research and development is done in California, continues Cook, "so the vast majority of our profits are taxed in the United States. European companies doing business in the U.S. are taxed according to the same principle. But the Commission is now calling to retroactively change those rules."

Uncle Sam reacts, too: Congress, the Treasury and the White House also chimed in on the EC ruling.

House Ways and Means Chairman Kevin Brady (R-Texas) took the EC ruling, which he called a "predatory and naked tax grab," as an opportunity to also slam what he calls "our broken tax code that continues to hurt American workers."

The U.S. Treasury Department said it was disappointed with what it called a unilateral EC ruling that could undermine the economic partnership between the United States and the European Union.

"We believe that retroactive tax assessments by the Commission are unfair, contrary to well-established legal principles and call into question the tax rules of individual Member States," a Treasury spokesperson said.

At 1600 Pennsylvania Avenue, the concern is that American taxpayers will ultimately bear the brunt of the EC's Apple decision. White House spokesman Josh Earnest says Apple could deduct the payment from those back taxes to the amount owed the United States government.

Ireland also upset: In addition to Apple's appeal of the EC ruling, Ireland says it, too, will fight the ruling.

The issue for Ireland is not so much the money the EC says it should collect from Apple, although I have no doubt that the country would love the cash, but rather the precedent that the ruling could set and which might lead to a loss of Ireland's sovereignty over its tax rates.

So hang tight, U.S. taxpayers, and set up a tax alert on your iPhone to get further developments.