It's official. Or as official as anything ever is with Donald J. Trump's run for the White House. The Republicans' 2016 presidential nominee will not be releasing his personal income tax returns. 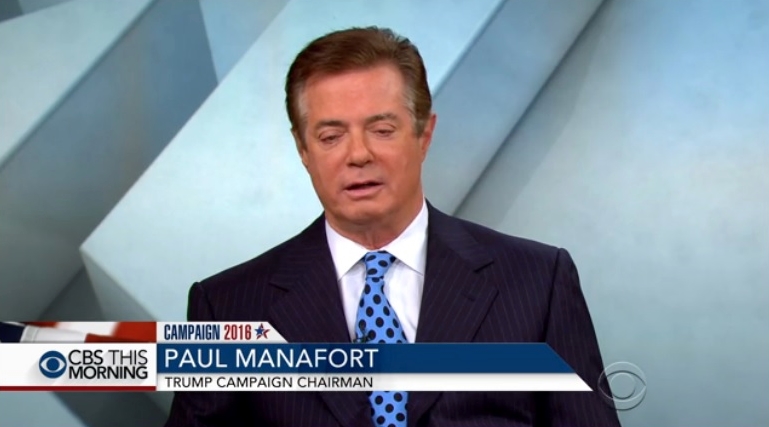 Paul Manafort, Trump's campaign chairman, appeared today on CBS This Morning and, in response to a query by Norah O'Donnell, reiterated his candidate's position on keeping the returns private.

"Mr. Trump has said that his taxes are under audit and he will not be releasing them," said Manafort said.

Trump originally indicated he would open up his taxes once the Internal Revenue Service is done with its examination. Manafort, however, seemed to be at least firmly closing the blinds on, if not locking, the window through which we might see Trump's taxes.

If The Donald doesn't show his 1040s to the voters before Nov. 8, he'll be breaking an election year traditional spanning both major political parties and more than 40 years. Even President Richard Nixon, who was under IRS investigation while in the White House, made his tax filings public.

And Trump's lack of tax transparency now has, like most of his campaign, taken an unusual international twist.

The Russians are coming, or maybe already here: Not to sound like The Donald, but others, most notably conservative pundit and Fox News contributor George Will, have speculated that Trump ties to Russia are why he's keeping his taxes private.

Will, speaking on a Fox News Special Report from the Democratic National Convention in Philadelphia yesterday (July 26) theorized that Trump is keeping his returns secret because they may show "he is deeply involved in dealing with Russia oligarchs."

Others have wondered about possible business connections to Russian mobsters in the United States.

The Russian connection has taken on new significance since U.S. investigators say Russian hackers stole the Democratic National Committee's emails. A handful of the communications indicated that some in the DNC were not happy with Bernie Sanders', officially an Independent, run for the Democratic presidential nomination.

If the Russian government was involved in the cyber break-in, it could be seen as trying to disrupt Democratic candidate Hillary Clinton's campaign and help elect Trump, who has praised Russian president Vladimir Putin.

Trump tried to quiet the chatter via, you guessed it, Twitter where he wrote, "For the record, I have ZERO investments in Russia."

Russian hackers, too: Today, however, Trump brought Russia back into the conversation.

At a press conference at his Doral golf course in South Florida, Trump invited the Russian criminals to search for Clinton personal emails that were deleted from the at-home server which also was used for some of her Secretary of State messages.

"Russia, if you're listening, I hope you're able to find the 30,000 emails that are missing," Trump said. "I think you will probably be rewarded mightily by our press."

The remark immediately set off alarms in all quarters, not just the Democrats.

"Russia is a global menace led by a devious thug," Brendan Buck, chief communications adviser for House Speaker Paul D. Ryan (R-Wisc.), told The Guardian. "Putin should stay out of this election.”

"How exactly would we distinguish Trump's latest comments from treason," wrote The Atlantic magazine's James Fallows.

Backtracking after treason question: After the hashtag #TreasonousTrump appeared on Twitter, @realDonaldTrump returned to his preferred social media outlet with a revised invitation to Russian and/or other hackers.

Rather than steal and then release them, Trump suggested they be turned over to the FBI.

That slight step back, however, did not quiet his critics.

"This undoubtedly sends a message to Russia that Trump is, at best, a fan, and at worst, manipulable and a bit of a loose cannon," Olga Oliker, director of the Russia and Eurasia program at the Center for Strategic and International Studies, told the Los Angeles Times.

"Russia will look at this, whether it's political theater or not, as [confirmation] that Trump would be better for them than Clinton, who would take a measured approach and discourage things that run counter to U.S. interests."

Tune in tomorrow for the next shots from the cannon candidate.

As a CPA I cannot trust someone that wont release his tax returns seeking the highest office in the land. Even Nixon released his. I keep wondering what is he hiding? What doesn't he want us to see?