Alaskans balked at an income tax, so governor is now pitching a statewide sales tax

Alaska is one of seven states that doesn't tax any workers' earnings. Lawmakers in The Final Frontier plan to keep it that way. 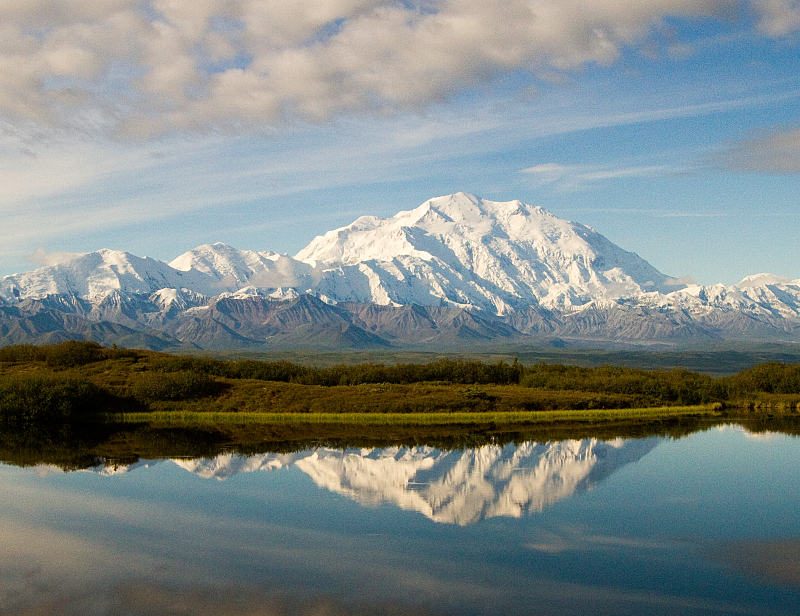 Mt. Denali, formerly known as Mt. McKinley, is the highest point in North America and is located in Denali National Park in Alaska. America's largest state has lots of spectacular views, but not enough revenue, so lawmakers are considering possible new taxes in a special session. (Photo by Albert Herring courtesy Wikimedia Commons/Flickr)

The latest question is whether they now will also fend off attempts to have Alaska collect a state sales tax.

While not as momentous as a potential income tax, a sales tax would be a big step, too. Currently, America's 49th state is the only one in the country that doesn't collect a statewide personal income or sales tax.

Walker, a former Republican who captured Alaska's top office in 2014 as an Independent after merging his campaign with his Democratic rival, previously floated a state income tax. He saw it as the quickest way to help reduce Alaska's multibillion-dollar budget deficit.

Since that didn't catch on with lawmakers, he's now suggesting the sales tax instead.

"We can stop this," Walker told the Associated Press in discussing the state's budget crisis.

Oil related fiscal woes: Alaska's deficit for fiscal 2017 stands at $3 billion. It has increased in recent years because of low oil prices.

Oil revenue taxes are the state's main revenue component. Since the completion of the Trans-Alaska Oil Pipeline, petroleum taxes and royalties that flow to the state treasury have accounted, on average, for more than 85 percent of the state's operating budget.

However, added Walker, if lawmakers who gathered this week in Juneau for the legislature's second special session don't act soon, Alaska will suffer a self-inflicted disaster from which it might not recover.

"They're going to drive Alaska from a recession to a depression as a result of not standing up and doing what's best for Alaska rather than for a re-election," Walker said.

A 3 percent tax proposal: As a resident of one of those other no-income-tax states, I understand the antipathy residents have toward that levy. But at least here in Texas, we get some money from our 6.25 percent state sales tax.

Alaska has no statewide sales tax, but local jurisdictions are allowed to collect their own. That local foothold may be enough for Walker to get a statewide tax.

Walker is recommending a 3 percent state tax on sales and rents beginning Jan. 1, 2018. Alaska's Department of Revenue estimates the tax could generate up to $500 million a year.

The tax would not apply to groceries, wages, reals estate purchases, and government sales.

Where would Alaska rank? If Alaska accepts a 3 percent statewide sales tax, it would be the lowest such rate in the nation.

As of Jan. 1, the Federation of Tax Administrators counted five states with the current lowest rate of 4 percent: Alabama, Georgia, Hawaii, South Dakota and Wyoming

Two states are at or more than 7 percent. California collects a 7.5 percent state sales tax. A 7 percent sales tax is collected by Indiana, Mississippi, New Jersey, Rhode Island and Tennessee.

No taxes in…: OK, I know you've been wondering since you started reading this post just where you can move to escape state taxation of your wages.

New Hampshire and Tennessee tax individuals' dividend and interest income, but not wages.

As for sales taxes, five states right now don't collect a statewide charge on purchases. They are, of course, Alaska and Delaware, Montana, New Hampshire and Oregon.