He did so last night (or, depending on your time zone, early this morning) by connecting Trump's tax secrecy to something that is dear to The Donald's heart: Money.

"Trump, I think you're not releasing your taxes because you don't have any money," said Meyers, looking into the camera and speaking directly to the Republican presidential nominee, because we all know (wink, nudge) that he was up late watching. 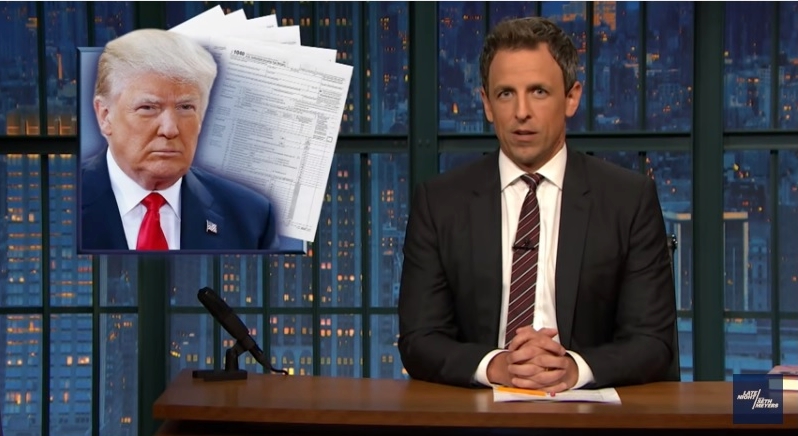 Click image to hear Seth Meyers' take on why Donald Trump refuses to reveal his taxes.

"I think you're broke. I don't even think you have an accountant. I think you use TurboTax," continued the former Saturday Night Live news desk anchor, who has assumed a similar persona in his current late-night show's news-related openings.

"You're not running for president because you want the power or want to make America great," added Meyers, ramping up the financial, political and tax accusations. "I think you need the $400,000 a year salary."

No laughing tax matter: While the TV spot was created for laughs, there are some very serious reasons why U.S. voters deserve to inspect presidential candidates' tax filings.

Beyond the raw numbers of tax rates and amounts paid, tax returns can provide a more complete picture of the person who wants to be America's Commander in Chief. The 1040s and associated forms and schedules are snapshots of not only a person's financial life, but his/her character.

They show the candidate's sources of income. Does he/she get money from domestic or foreign payers, entrepreneurial endeavors, investments? What tax breaks are claimed? Are there any tax haven issues?

Tax filings also are a glimpse into who a person is and what he/she believes.

We can see how much the candidate gives to charity and which nonprofits he/she chooses to support. This offers insight into a person's values and priorities.

Are some of these things why Trump refuses to share his tax returns? Possibly.

An embarrassment of non-riches: But many folks, including me, agree with Meyers' calculation that Trump earnings, or the lack thereof, are the main reason the bombastic candidate won't open up his taxes.

If Trump's returns showed he paid millions in taxes on billions of earnings, under Internal Revenue Service audit or not, we would have heard (and heard and heard) about that long ago. The man is obsessed with everyone believing he is super wealthy.

But he's unwilling to prove it, or let us get any additional insight into who he is and what he does with the questionable amount of money he does have.