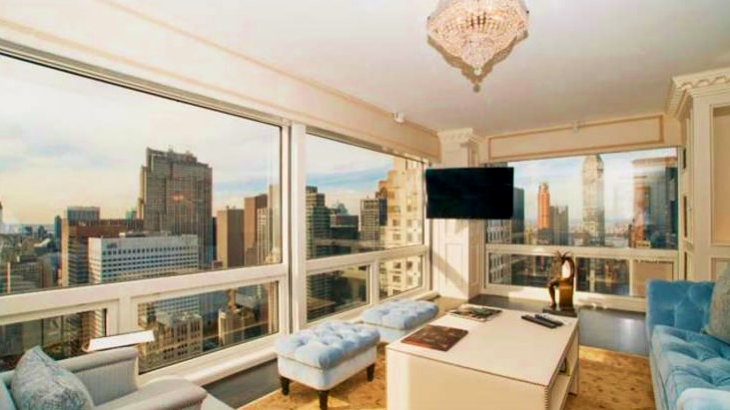 This isn't The Donald's Big Apple home, but another apartment for sale with similar views in New York City's Trump Tower.

Trump's attorney asked the New York City tax collector to remove a tax break the presumptive Republican presidential nominee had received that typically is awarded only to taxpayers making less than $500,000. The city complied, thereby increasing Trump's tax bill on his Trump Tower condo by $1,046.41, according to The Wall Street Journal.

The removed breaks were from the Empire State's School Tax Relief, or STAR, program and cover three tax years. Interest charges are included in the adjusted Trump property tax bill.

But, notes the newspaper, a spokeswoman for the Big Apple's finance department, citing taxpayer privacy, wouldn't say whether the city had determined that Trump legally qualifies for the break.

Trump's tax break on his Fifth Avenue apartment was first reported in March by Crain's New York Business. The Donald's people said then it was a mistake. But he got the tax break again on his next quarterly property tax bill.

Tax return holdout: Of course, the GOP hopeful's tax status could be cleared up when if Trump releases his tax returns, something every presidential candidate has done for the last 40 or so years.

Trump says he can't release his returns because he is under audit, even though Richard Nixon did so in 1973 when the Internal Revenue Service was examining his returns while he was in the Oval Office.

And, Trump is quick to point out, income tax returns don't necessarily reveal wealth. It is possible for business owners who are losing money, deferring gains or taking advantage of deductions to report little or no income.

What we could learn: But, notes Tax Analysts' Tax History Project Director Joseph J. Thorndike, a candidate's tax returns "can shed light on the way a candidate lives his life. It can tell us about charitable giving as well as personal borrowing and investment activity. Returns can also illuminate the complicated business arrangements that often provide the bulk of a candidate's income, especially for a real estate mogul like Trump."

In addition, says Thorndike, "tax stonewalling also threatens something more important: The integrity of the tax system. That’s not something we can tolerate or excuse in any candidate – even one who has built his brand on breaking all the rules."

Trump continues to feel pressure to release his returns, both from his expected Democratic opponent Hillary Clinton and her supporters who needled Trump about his true net worth, and the media digging into his finances.

Will that be enough to eventually convince Trump -- or more likely, his retooled campaign operation -- to share his filings with voters? Maybe, but not until The Donald himself decides it will do him more good than harm.