Donald J. Trump has had issues during his presidential campaign with charities. 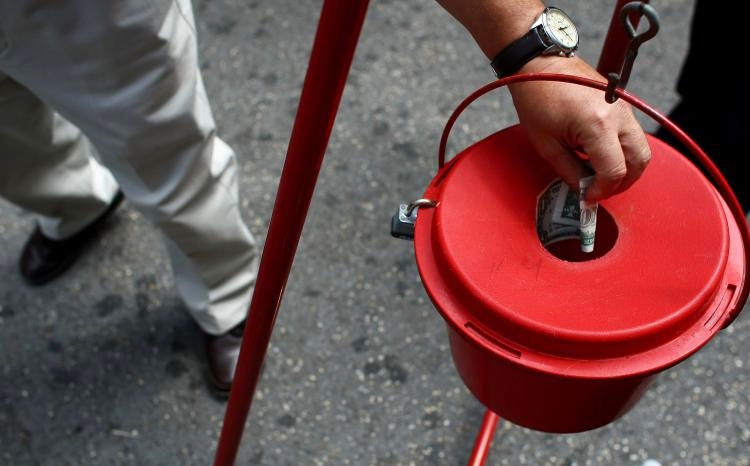 There was his fundraising event back in January for veterans' groups. That was followed up by questions about just how much money was made and to what military-focused nonprofit groups it eventually was distributed.

The matter of The Donald's own personal charitable donations also has been discussed, particularly in light of his refusal so far to release any of his tax returns.

Now a member of a conservative Washington, D.C., think tank says that he's advised the presumptive Republican nominee to consider taxing rich people more for their donations to nonprofits.

Reducing wealthy donors' deduction: Heritage Foundation economics expert Stephen Moore said too many billionaires, like Bill Gates and Warren Buffett, are using charitable organizations to shield themselves from taxes, according to a story in today's The Hill newspaper.

"Look at Bill Gates and Warren Buffett; you’ve got billions of dollars that are never taxed. … One of the big leakages in the tax code is deductions for nonprofits," Moore, who met with Trump last week, told the Capitol Hill publication.

Buffett regularly gives generously to various charities, usually through donations of stock in his company Berkshire Hathaway. Among those groups getting the Oracle of Omaha's gifts is the Bill and Melinda Gates Foundation.

Here Moore is focusing not on the standard types of donations you and I and sometimes even the ultra-wealthy make to standard 501(c)(3) groups. Rather, in the interview he expressed frustration that the federal government loses so much revenue because so many businesses establish themselves as nonprofits to dodge taxes.

Moore said the policy challenge would be writing law that distinguishes between genuine charities, like churches and the Salvation Army, and those that should be subject to taxes.

"The question is: Could you make a distinction between a church, homeless shelter, soup kitchen versus the Brookings Institution?" Moore told The Hill, referring to another D.C.-based think tank that, like Moore's employer, the Heritage Foundation, is a tax-exempt 501(c)(3) organization.

Trump has asked Moore and CNBC commentator Larry Kudlow to advise him on economic policy, which includes his tax plan.

However, Moore emphasized in The Hill interview that his proposal about how apparently easy it is for many groups to avoid taxes is his personal view and may not end up in Trump's final tax plan, which still calls for preserving the mortgage interest and charitable donation deductions.

End the excessive tax-free designations: I totally agree with Moore that there are way too many tax-exempt groups.

This overly broad category includes both the widely used 501(c)(3) groups that provide tax deductions for donors, as well as the 501(c)(4) nonprofits that ostensibly focus on educational endeavors.

I'm sure all y'all remember the problems that the (4) groups have caused the Internal Revenue Service, especially since Tea Party groups complained in 2013 that their applications for the preferable tax status were subjected to IRS political screening bias.

The scandal continues to dog IRS Commissioner John Koskinen, whom GOP Representatives are trying to impeach.

Excessive gifts not all immediately deductible: There already are a couple of tax-deduction limits on gifts to the 501(c)(3) groups that most of us typically give to in order to support our favorite causes.

The first is just how much we can donate and deduct in one tax year.

Most of these public charities are known as 50-percent organizations. This name comes from the rule that limits donors' itemized tax deduction amounts to no more than half of their adjusted gross income.

But don't despair. The tax code lets you carry the excess deduction amount forward to a future tax year. You have up to five years of carryforwards to claim your full charitable gift.

And for tax geeks and more creative donors, there's also a 30 percent limit on charitable contributions to certain types of organizations, such as fraternal societies, nonprofit cemeteries and certain private foundations.

Lost deduction claims for the rich: In addition, higher-income taxpayers also stand to lose some of the tax benefit of their charitable gifts.

Under what is known as the Pease limit, named for former Rep. Donald Pease (D-Ohio) who championed the original law in 1990, a taxpayer's total Schedule A itemized deduction amount is reduced when a taxpayer makes more than a certain amount. The income caps apply for each fling status and are adjusted annually for inflation.

For the 2016 tax year, the itemized deduction reductions kick in for filers who make:

Since most taxpayers don't itemize, this is not an issue. Millions still give to charities every year without thinking about the tax implications. Many thanks and good for all y'all who do this.

But if you do donate and itemize, then make sure you know all the tax rules regarding your gift. It doesn't lessen your goodwill any when you claim to the full extent under current law the legal tax deduction to which you're entitled.

I would actually prefer they take away the charitable deduction if it came with lower rates on cap gains and dividends. Alas, that probably won't happen they'll just take it away