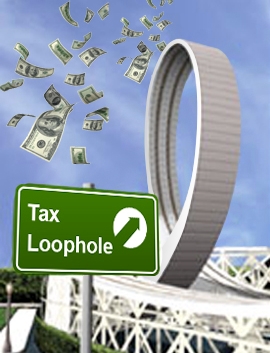 Hillary Clinton says the U.S. tax code is "'riddled with scams and loopholes" that benefit the wealthy and corporations. The presumptive Democratic presidential nominee says she'll address those inequities if elected.

Donald Trump, her likely Republican opponent, is at the center of questions about tax code loopholes. Since he's yet to release his personal tax returns, there's much speculation that he's used some of them to zero out his recent tax bills, much like he apparently did back in the late 1970s.

Don't email me! I'm not saying anything that The Donald might have done with his taxes was/is illegal.

Meanwhile, the dream of tax reform remains just that, a dream.

Prior attempts to tackle the tax code: While there was some movement in the 113th Congress, when the then chairmen of the two tax-writing committees -- Republican Rep. Dave Camp of Michigan, heading Ways and Means, and Sen. Max Baucus, a Democrat from Montana, steering Senate Finance -- launched a ballyhooed bipartisan national tax reform tour.

With the start of the 114th Congress in 2015, new Finance Committee chair Sen. Orrin Hatch (R-Utah) released an in-depth analysis of "Comprehensive Tax Reform for 2015 and Beyond." Hatch and Sen. Ron Wyden (D-Ore.), the ranking Democrat on Finance, followed that up by soliciting public input on possible tax law changes.

Stalled by the election: But let's be honest. No one realistically expected an Internal Revenue Code overhaul in an election year. Both major parties are too far apart and want to see if their candidate will win the White House.

There's also the matter of Congress. Will the new president who takes over in 2017 face a House and Senate staunchly opposed to his or her policies. Or will at least one legislative chamber be controlled by the Commander in Chief's party?

All the election permutations will play a major part in what any eventual tax code rewrite will look like.

Tax rewrite hopes in 2017: There are a lot of moving parts, but that didn't stop the Tax Foundation from taking a look at what form comprehensive tax reform might take next year.

Any large-scale plan, notes the Washington, D.C.-based tax policy group, must contain many trade-offs and be economically sound. Plus, it must get bipartisan support.

Wait! Come back! It could happen!

"During our experience with scoring the [2016 presidential] candidates, we learned that most lawmakers and their staff don't have a full understanding of the mechanics of tax reform, the trade-offs that must be made, and how different tax policies affect the economy," said Tax Foundation President Scott Hodge. "This book provides policymakers with a full, three-dimensional view of the effects of each policy change. It explains the mechanics of tax reform, the dos and the don'ts."

The organization also notes that it's not taking sides. None of the listed policies would be an unequivocally good or an unambiguously bad change to the tax code.

"Each tax policy impacts the economy in unique ways, and people need to understand why," said Tax Foundation Director of Federal Projects Kyle Pomerleau. "We want to break down misconceptions, and explain that not all cuts pay for themselves and not all hikes raise the revenue people think they will."

Sounds like perfect summer no-so-light tax reading in this election year. And something to think about as you decide who will get your vote, both at the executive and legislative levels, this November.