As the U.S. Senate was preparing to debate tougher gun control proposals (they all failed, by the way, in votes held Monday, June 20), a government transparency group was issuing a report on the amount of armaments held by non-military U.S. agencies. 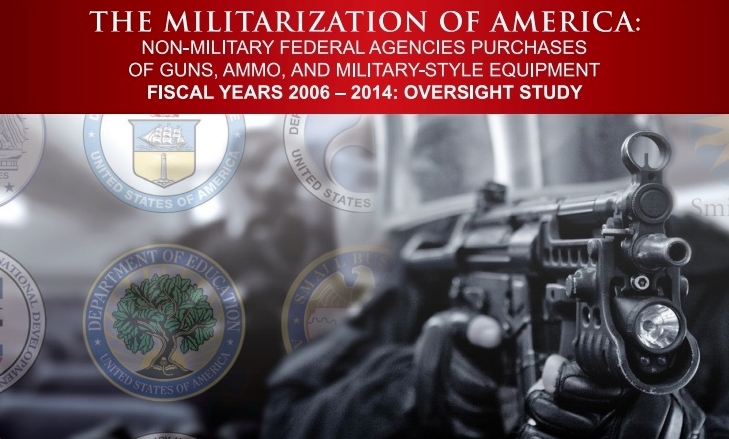 In its publication "The Militarization of America," Open the Books also blasts the Internal Revenue Service for its inadequate inventory control in tracking weapons in its Criminal Investigation Unit.

Open the Books, which is a project of the nonprofit organization American Transparency, says in its report that:

What the IRS is packing: The IRS is among the agencies examined by Open the Books. It found that the tax agency, with its 2,316 special agents, spent nearly $11 million on guns, ammunition and military-style equipment. 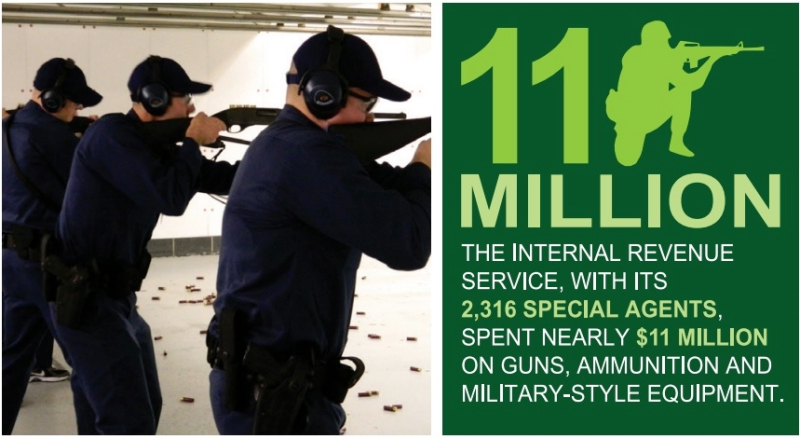 Why the firepower? According to the report:

The IRS states its mission: to provide America’s taxpayers top quality service by helping them understand and meet their tax responsibilities and enforce the law with integrity and fairness to all.

Under Section 7801 of the Internal Revenue Code, the IRS has statutory authority to enforce tax laws.

The IRS also employs 2,316 Special Agents who are investigative forensic accountants utilizing specialized technology to uncover what can be sophisticated schemes to defraud the government, as well as assist in counter-terrorism and anti-narcotics efforts. This law enforcement history dates to the early twentieth century.

Since a record high in FY1995, the number of IRS ‘Special Agents’ severely declined. In fact, the decrease in the employed agents is over 1,000 personnel during the period 1995-2015.

What is new about the IRS, however, is its escalating investment in heavy-weaponry, according to agency disclosed records. [Highlighting from the report.]

From FY2006-FY2014, the IRS spent $10.71 million [highlighting from the report] on the purchase of guns and ammunition on behalf of 2,316 law enforcement officers (FY2015), or approximately $450 per officer per year. The recent spikes in IRS purchasing could be related to the increase in recent "Identify Theft" crimes and the prosecution of those crimes into sophisticated gang activity. IRS Special Agents devoted 20-percent of their time to ID theft cases between 2010 to 2012. IRS Special Agents are also frequent members of Joint Terrorism Task Forces investigating very dangerous criminals. Additionally, 12-percent of the IRS budget is devoted to drug related financial crime.

The excerpted page from the report below shows the type of armaments the IRS has purchased over the years. 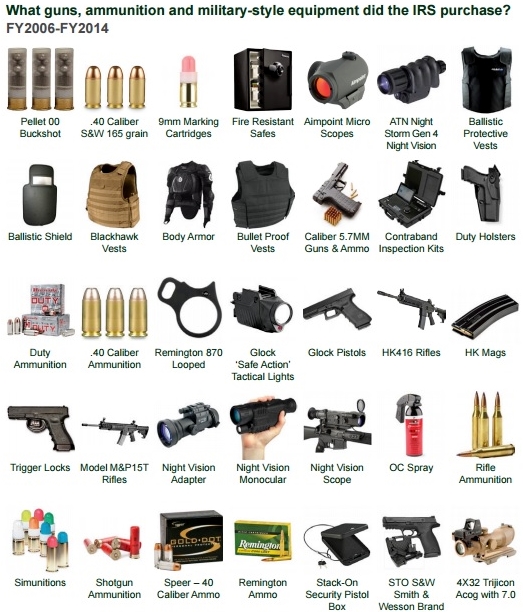 Inadequate inventory: The report notes that many IRS purchases of guns and ammunition were mischaracterized as larger than 30MM.

"In the contract descriptions, we found few – if any – weapons purchased larger than 30MM," according to the report. "Furthermore, the procurement categories of 'nuclear' and 'military chemical weapons and equipment' are also accounting mistakes in agency checkbooks."

Adam Andrzejewski, founder and CEO of Open the Books, told Tax Analysts that it asked the IRS to provide the most current inventory accounting of guns and ammunition it possesses.

"The IRS didn't have a document or audit to produce as an answer to this question," Andrzejewski told the tax publication. "The response shows that the IRS was not in possession of the information on a national, aggregated basis. The information may exist at the local IRS field office level, but headquarters couldn't produce an audit or asset inventory document."

Ammo for IRS opponents: This is not good IRS. And it gives (pardon the way-too-easy pun) more ammunition to members of Congress who want to take the agency's finger (sorry; another pun mea culpa) off the trigger.

Specifically, Republican Rep. George Holding of Raleigh has introduced a bill that would, in his words, "take the guns and badges away from the IRS."

H.R. 5296 would instead reassign IRS Criminal Investigation (CI) agents to the U.S. Treasury, which already oversees the tax collection agency.

"These are the IRS agents that carry guns and badges, and they're very skilled," Holding told McClatchy News Service. "But the IRS itself is a failed bureaucracy."

"My legislation will remove CI from the bureaucracy of the scandal-ridden IRS and allow for an increased focus on law enforcement," Holder said in his remarks upon introduction of the CI Realignment Act.