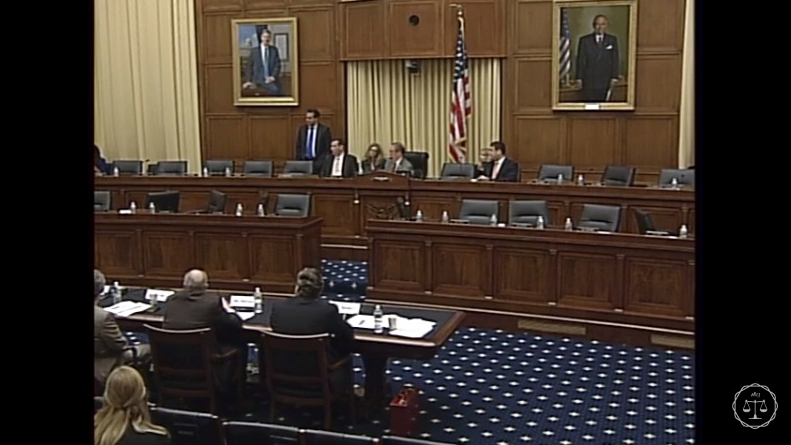 Only a handful of lawmakers remained in the Judiciary Committee hearing room by the time the latest session on impeaching the IRS commissioner wrapped up on Wednesday, June 22. Click image to watch full hearing on YouTube.

On a day when the House Judiciary Committee's second hearing on his possible impeachment might otherwise have garnered much attention, the Capitol Hill session was upstaged by two other events.

Then, as that was wrapping up, Democratic Representatives and a handful of supportive Senators staged a '60s-style protest, conducting a sit-in on the House floor to protest the GOP leadership's refusal to hold votes on gun control legislation.

Given those two other options, who would want to sit through a two-hour-plus committee hearing? OK. We all know who would.

But what did all normal, nontax nerds who took a pass miss on the Koskinen front? Not much.

Same old, same old: The wagons were circled along party lines, with Judiciary Committee Chairman Rep. Bob Goodlatte spelling out the "serious allegations of misconduct" against Koskinen in his opening statement:

Giving false testimony to Congress about how the Internal Revenue Service [mis]handled intra-agency emails is an impeachable offense, but House [Republican] action sans Senate support would be a mistake.

That was the assessment of Andrew McCarthy, a former assistant U.S. attorney for the Southern District of New York, at part 2 of the House Judiciary Committee's hearing to consider the impeachment of IRS Commissioner John Koskinen. The panel met May 24 to hear from House Oversight and Government Reform Committee members on their investigation into Koskinen's actions.

Michael Gerhardt, however, told Judiciary members that, "In my opinion, I think gross negligence doesn't qualify" as one of the constitutional requirements -- treason, bribery or other high crimes and misdemeanors -- for impeachment.

Gerhardt, a constitutional law professor at the University of North Carolina Law School, said in his view, impeachable conduct would have to involve "bad intent."

The conflicting opinions of legal experts, which also included George Washington University law professor Jonathan Turley and Todd Garvey, legislative attorney with the Library of Congress, mirrored the disputes among the committee members themselves.

No decision yet: Democrats decried, again, the actions against Koskinen as more political time wasting. Rep. Hank Johnson (D-Georgia) compared the Judiciary and House Government Oversight Committees to "a dog chasing its tail."

"Heaven forbid we get rid of somebody who lied to Congress," said the Utah Republican, who serves on Judiciary and chairs Oversight, and who has been pushing for Koskinen's removal for almost a year.

If he succeeds, it would be the first impeachment of an appointed executive-branch official in 140 years.

So far, Chaffetz has been able to get his GOP colleagues on Government Reform to agree to censure Koskinen. But his chances of impeachment the IRS chief are smaller.

Neither neither House nor Senate Republican leaders have expressed support for the effort.