A few years back, the Internal Revenue Service revamped its website and did a pretty good job. IRS.gov won some awards and is better than many other federal agency online presences. 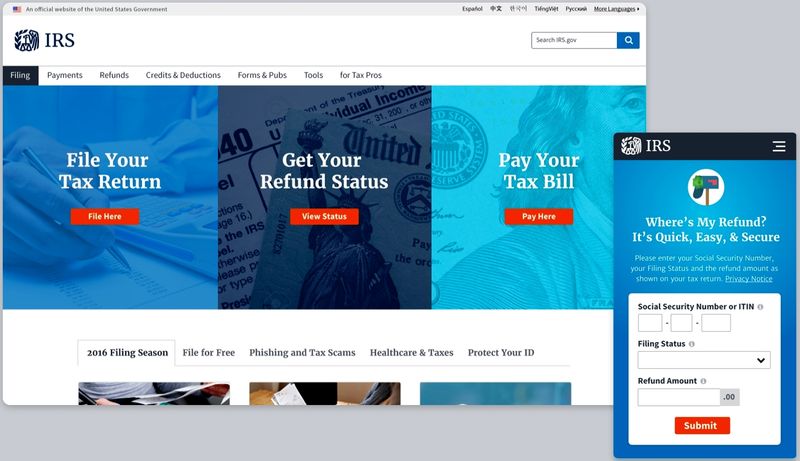 But the IRS decided that as more of us taxpayers are online every day, it wanted to make sure it was remains part of our cyber interaction.

Getting public design input: In March, the IRS announced the Tax Design Challenge, its first foray into crowdsourcing. The competition offered a variety of cash prizes, paid by the contest's private partner the Mortgage Bankers Association, for innovative website designs that could help enhance taxpayer experiences.

This afternoon, June 10, the IRS announced winners and runners-up, five in all, in three design categories.

Entrants were given 200 data items related to taxpayer accounts and tax transcripts and instructed to use them in their designs in ways to help the IRS shape how it interacts with the public and vice versa.

The winners were selected by five judges from 48 design submissions.

The five designers recognized at today's special ceremony at the IRS offices in Washington, D.C., also are this week's By the Numbers honorees.

Below are the winners, a few bits of information about them and their designs and the categories in which they were cited.

Miller is a user-interface designer and front-end web developer, currently working as a contractor for Sandia National Labs. In his free time he serves as the Creative Director of Model T Digital, a freelance web developing agency.

In announcing the prize, Paul Mamo, Deputy Director of the IRS' Office of Online Services, noted that Miller's design, entitled "IRS MyService" and pictured at the top of this post and below this paragraph, is both aesthetically appealing and intuitive for taxpayer. 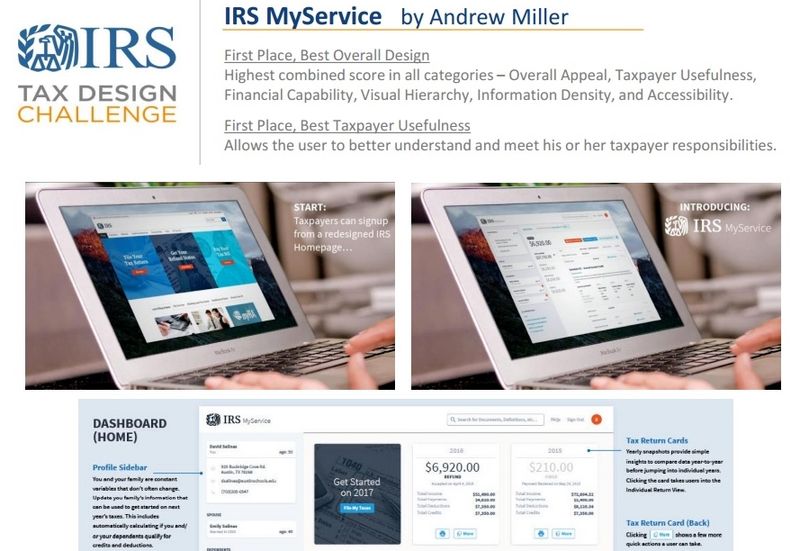 The design dashboard view offers a detailed look at the taxpayer's multiple year information in baseball card format. Miller also incorporated IRS tools into quick links and has intelligent paths that feature the data where taxpayers would think to look for it. Plus, it can be used on both desktop and mobile devices.

Andrea Angquist's "IRS 365" design was runner-up in both the Overall Design and Best Taxpayer Usefulness categories.

Even before the IRS competition, Angquist was an award-winning designer living and working in Silicon Valley. Currently, she is a Product Designer for Pivotal, where she helps companies design and launch new products and transform their teams using Lean UX and Agile methodologies.

Mamo lauded Angquist's entry for its beautiful mobile-first design, so it was fitting that she appeared on smartphone to accept her honors. Mamo even walked the device across the stage so via Facetime she could meet IRS Commissioner John Koskinen and David H. Stevens, president and CEO of the Mortgage Bankers Association.

Angquist won $5,000 for her second place finish in Best Overall Design and another $1,000 as runner-up in the Best Taxpayer Usefulness category.

Sam Nguyen and Vidhika Bansal worked as a team on the design they call "taxes." It was judged the best in the Best Financial Capability category, which carried a $2,000 prize.

Nguyen is a Certified Financial Planner, an Enrolled Agent, and is pursuing the Certified Public Accountant license. He currently is a tax adviser at Alexandria Capital, an SEC-registered investment advisory firm in Washington, D.C.

Bansal is a UX Strategist with a background in behavioral science, research, and human-centered design. She is passionate about the power of words and thoughtful design to build experiences that make people's lives easier, healthier and happier.

Dante Vono's "MyTax Online" was runner-up in Best Financial Capability. He won $1,000 for his effort.

Vono is a User Experience Designer who has been creating interactive tools for the web since 2000. His specialties include personal finance, investment tools, and data visualization. He's designed solutions used by millions on major financial news websites.

Future IRS interaction: Koskinen, in brief remarks during the ceremony, said that the IRS reached out to creative and talented folks in the tech sector for their thoughts on what coming taxpayer interactions would -- and should -- look like.

You can see examples of these five designers' suggested IRS.gov remakes, which the agency hopes to incorporate in its Future State plan, in the ceremony's brochure.

Finally, since the IRS is all about the money -- and today's cash awards are taxable income -- it's worth noting the payments themselves. The winners were given over-sized checks representing their design earnings because that's the standard publicity photo prop.

But, noted Mamo, "here at the Service, we use direct deposit."