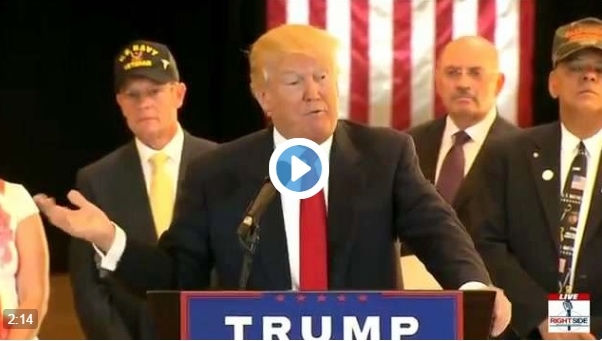 The 41 nonprofits and the amounts they received/will get are:

Readers of the ol' blog will notice that the donation to one of the groups, Marine Corps-Law Enforcement Foundation, was previously announced. This latest list, however, bumps up the contribution amount from $1 million to $1.1 million.

Showing us the money: Trump discounted charges that it had taken months to announce the charitable donations from the Jan. 28 Des Moines event, which his campaign quickly arranged after Trump bowed out of a Republican presidential candidates' debate that same night, because the amount collected was much lower than the $6 million originally announced.

"As of this moment, it's $5.6 million," Trump told reporters gathered at Trump Tower in New York City. "The money has all been sent."

Well, except for that 100 grand awaiting confirmation that the designated recipient, Project for Patriots, is a qualified IRS charity.

The all-but-official GOP presidential nominee also said that his philanthropic entity, The Donald J. Trump Foundation, hasn't used any of the money raised to pay staff or cover operational expenses.

A new, shy The Donald? As for the delay in the announcement, Trump said it was because "I wanted to keep it private, because I don't think it's anybody's business if I want to send money to the vets."

One, you're not really known for being publicity shy.

Two, you didn't seem so reticent when you and your people announced the televised veterans' charities fundraiser to the world and encouraged them to watch it instead of the political debate.

Three, why did you call today's press conference to announce the donation recipients instead of just issuing a written release?

Lessons for all donors: The Trump campaign's notation that one of the designated veterans groups hasn't gotten its share yet because his foundation is waiting to check out its tax documents might seem like a double standard.

After all, The Donald is withholding his recent returns from voters who'd like to ensure that he follows the same tax laws they do.

But it is a good lesson for all charity donors.

You need to check out a charity before you donate for several reasons:

You can find other charitable donation tips in my earlier post on IRS rules for philanthropic gifts and tax deductions.

Reputable nonprofits won't mind you looking at them closely. And if your due donation diligence prevents you giving to a less than stellar or bogus group, that means you have more money to give to the good guys.

Margaret, Donald Trump might get the deduction for his personal $1 million he gave to one of the groups (the Marine Corps-Law Enforcement Foundation), but we'll never know if he doesn't release his tax returns. I didn't watch the whole event; it mainly was talk about the veterans' groups when I was watching. I didn't see any signs for the campaign, but rather for the donations. His foundation does appear to be on the IRS approved list.

Is the donations of the veterans fundraiser in Jan 2016 that went to the Donald J. Trump Foundation 501(c)(3) meet the IRS requirements of politics and 501(c)(3). Was there any political signs, talking politics and his campaign, etc that might be against regulations. Also, does Trump benefit for charitable contributions on his taxes that he gave for the veterans from other donations on this taxes. Thanks