Go big or go home. That's a common mantra down here in Texas.

A variation applied this week in a federal bankruptcy courtroom in Big D. The judge there ruled that a former Lone Star billionaire's big attempt to shelter money offshore means he owes the Internal Revenue Service a big bill. 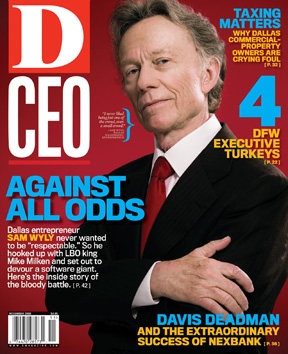 Sam Wyly, a once legendary Dallas businessman, philanthropist and one of the wealthiest men in the country (shown at right on the October 2015 cover of D CEO magazine), was found on May 10 to have defrauded the IRS by shuffling assets among a network of offshore trusts to evade millions of dollars in taxes.

Now he and his late brother's estate must now scrape together the money to pay the tax that Uncle Sam says he's due.

IRS' billions in bankruptcy claim: In April 2105, the IRS was in that court filing what was believed at the time to be a record $3.23 billion in tax liens against Sam Wyly and the estate of his brother, Charles, who died in a car crash in 2011.

The IRS later reduced its claims, seeking instead "just" $1.43 billion from Sam and "only" $834.2 million from Caroline (also sometimes shown as Carolyn, although she was known to friends and family Dee) Wyly, Charles' widow and heir to his estate.

Around 80 percent of that still astounding amount reportedly covers penalties and interest.

The brothers made their fortunes buying, expanding and then selling companies. But the string of business success ran out, thanks in large part to a series of legal battles with U.S. agencies, including the Securities and Exchange Commission (SEC) and Uncle Sam's tax collector.

In its bankruptcy court claim, the IRS said it was the victim of a vast fraud that was revealed in a 2010 Securities and Exchange Commission (SEC) suit against the Wyly brothers. The SEC charged that the siblings violated federal securities laws when they created a series of offshore trusts on the Isle of Man, a jurisdiction often cited as a tax haven.

As expected, Wyly and attorneys for him and his brother's estate dismissed the IRS allegations. True to his Texas roots and in keeping with the Lone Star penchant for down-home speak, Wylie called the charges baloney.

In her 459-page opinion, Houser found that the Wyly brothers committed tax fraud over the course of almost 15 years through the sophisticated use of foreign trusts, annuities, and Nevada corporations. She rejected arguments that the 81-year-old Sam Wyly was simply following orders from his attorneys.

"The court does not believe that the law permits Sam to hide behind others and claim not to have known what was going on around him," Houser said. She also noted in her decision:

"To accept the Wylys' explanation requires the Court to be satisfied that it is appropriate for extraordinarily wealthy individuals to hire middlemen to do their bidding in order to insulate themselves from wrong-doing so that, when the fraud is ultimately exposed, they have plausible deniability."

As for the money the IRS says it's owed, Houser last week gave the parties 30 days to get together and come up with "agreed amounts" on the claims to the court. Failing an agreement, each side is to submit its own proposal to the court.

Sam Wyly's attorneys are examining their next potential course in the legal action, but the consensus among tax and bankruptcy experts is that the best course for Sam and Charles' estate is to strike a deal with the IRS and pay a "significant" amount of tax to resolve the case.

Self-proclaimed billionaire and presumptive Republican 2016 presidential nominee Donald J. Trump got a lot of unwanted attention for his refusal to reveal his tax returns. He said on May 11 that he's keeping the federal filings private until the IRS finishes its continual audits of his 1040s. So that likely means we'll never see them.

And one of Trump's political foes, car-elevator rich Mitt Romney saw the resolution of a criminal case that involved his tax returns. Back in 2012, the GOP's then White House candidate's tax returns purportedly were hacked and the individual who claimed to have the filing demanded $1 million ransom to keep them secret. That Tennessee man was convicted on May 12 of fraud and extortion.

Additional information from the Panama Papers, the documents detailing alleged tax havens allegedly facilitated by the Panama-based laws firm Mossack Fonseca, was made available to the public via a new and massive online database. That prompted a U.S. Senator to ask more questions about Panama Papers-cited tax shelters established in Nevada and Wyoming.

Also over at Bankrate Taxes Blog last week, I examined the IRS revelation that it had been directly calling taxpayers in audit situations without first sending the filers a letter. The agency now says that in order to forestall tax scam worries, it's changing that procedure.

I usually post my additional tax thoughts at Bankrate on Tuesdays and Thursdays and then provide highlights and links here the following weekend for folks who missed the postes when they first went live. I hope you enjoy them both here and there and thanks for reading when- and wherever.