Tax collectors use shaming to prompt delinquents to pay

Given all we see on social media, it seems that many people nowadays have no shame.

Some government officials, however, think that this pervasive "so what, no big deal, look at me anyway" attitude doesn't extend to unpaid taxes. They are publishing the names of delinquent taxpayers in the belief hope that it will humiliate the public tax debtors to pay up.

It's not a new tactic. Almost as soon as tax departments created a website, these lists started showing up online.

But now more places are making sure that folks don't just stumble across the tax delinquents. In addition to the online postings, they also are alerting other members of the media of the tax-due names they are naming.

Virginia city shares names of tax delinquents: One such situation is in Petersburg, Virginia, where the city's treasurer says the publication of a list of delinquent taxpayers in a local newspaper has helped his office collect more than $581,000 in previously unpaid taxes from more than 70 accounts.

"These are funds that the city had budgeted to fund its operations, and the taxpayers that have failed to pay are forcing those who are in compliance to bear a heavier tax burden," Kevin Brown said in a statement to the Richmond Times-Dispatch.

Brown told the newspaper that the publication of tax debtors' names, which is authorized by law, is just part of the "more serious efforts" his office is taking to retrieve unpaid taxes that have contributed to the city's budget shortfall.

Texas county tactic, too: That same approach also is being tried in the Austin, Texas, area.

Travis County Tax Assessor-Collector Bruce Elfant (below) on May 3 released the county's top 10 delinquent property taxpayers. The announcement was made just before the monthly auction of foreclosed properties at Heman Marion Sweatt Courthouse in downtown Austin. 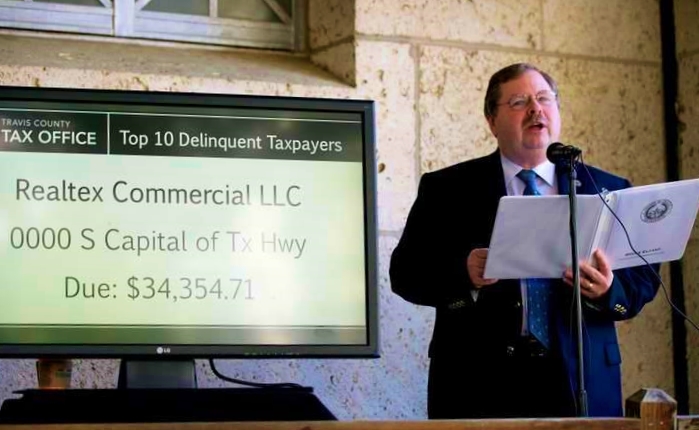 "While the tax office has collected 98.64 percent of the property taxes owed for the county's 111 government entities, including school districts and cities, for the 2015 tax year, it has 18,146 property owners who collectively owe over $36 million," Elfant said.

The 10 properties cited by Elfant were not on the auction block yet, but, he noted, "if the owners don't pay in a reasonable amount of time, they will be sold, right here on the courthouse steps."

It seems to have worked on some of those on the list. The Travis Country Tax Assessor-Collector's Facebook page notes that just hours after the list was released, two delinquent taxpayers paid their overdue bills.

Work out a payment plan: Tax offices tend to make examples of businesses that owe overdue taxes, although some places do list individual tax delinquents, too.

To ensure that you don't end up on one of these lists and possibly lose your property to tax seizure and auction, don't ignore your tax bill. If you can't pay the amount due, contact your local tax office and discuss payment options.

Elfant made that point in announcing the current top 10 tax delinquents:

"It is important to note that all we ask at the tax office is if you cannot pay your tax bill in full to contact us, talk to us and work with us."

I'm sure you'll hear the same thing from your local tax assessor-collector.