Donald J. Trump, the presumptive Republican presidential nominees, skipped the Des Moines, Iowa, debate back in January. The Donald was feuding with Fox News, the debate's host, then and opted instead to hold his own event. 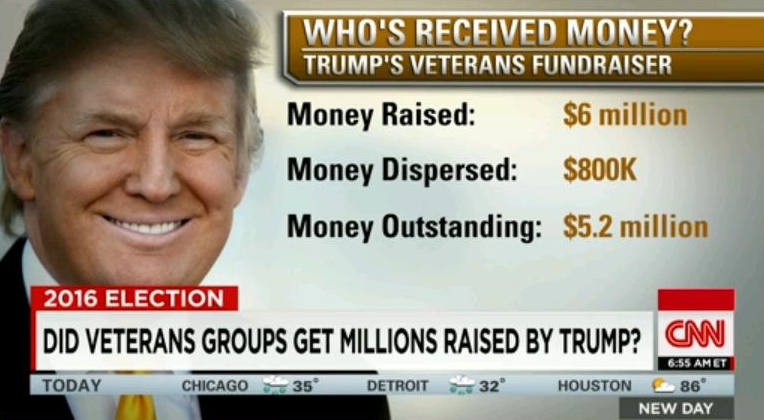 Trump's alternate televised gathering at Drake University, also in Des Moines, was promoted as a fundraiser for veterans' charities.

So how did that turn out? How much was donated? Which charities got some of the cash collected almost four months ago?

The answers are, apparently, pretty good from a political posturing standpoint, not as much as hoped or touted, and not many.

Armed Forces Day accounting: Since this is Armed Forces Day in the United States (it's celebrated at other times by other nations worldwide), it seems a good time to look at the money promised to groups that help our military personnel after they return to civilian life.

The news is not good.

Some of the donations were made at a special web page that is still accessible and proclaiming collections of $1.6 million. But that's all it says. There's no indication of where the money went.

Shortly after the event, the Trump campaign announced that it had reached its goal of $6 million in donations. To go with the online donations, The Donald personally pledged $1 million; the rest reportedly came from Trump's wealthy buddies.

Now, however, comes word that the veterans' fundraiser fell short of its goal.

Unsure about amount: Corey Lewandowski, Trump's on-then-off-then-back campaign manager told CNN on Friday, May 20, that the amount raised was actually less than $6 million. He told the cable news channel that he didn't know the exact number off the top of his head, but would get the info out in coming days.

The problem, and one routinely faced by pledge drives, is that folks didn't follow through on their promised donations.

Lewandowski told the Post that he had spoken to some individuals who were going to write large checks, but for whatever reason "didn't do it. I can't tell you who."

Show them the money: As for the money that was collected, The Wall Street Journal reported in April that 19 of the 22 veterans' groups originally listed by Trump's campaign as prospective recipients of the Des Moines donations had received about $2.4 million of the fundraising take.

Some veterans also have called on Trump to get the money to the groups as promised.

In a statement, whose signatories included Democratic Reps. Ruben Gallego of Arizona and Seth Moulton of Massachusetts, veterans said in part:

Donald Trump recently discovered a new love for America's veterans, promising that a Trump administration will "treat them really, really well." Yet after a publicity stunt earlier this year when he ditched a GOP debate to hold an event on behalf of veterans, his campaign still hasn't distributed more than half of the $6 million dollars it allegedly raised.

The statement, which was released by the Hillary Clinton campaign, also questioned the accounting of the donations, as well as Trump's foreign policy positions.

Many military amounts: It's the dollars, though, that are the focus on this Armed Forces Day. There's the $6 million goal, $4.5 million collected (we think) and $2.4 million or $800,000 (depending on different reports) distributed.

Of those amounts, the ol' blog is going with $6 million as this week's By the Numbers figure.

While that's probably not going to be what is ultimately collected, much less distributed, it is at least a fixed amount. All the other veterans' event numbers, like the man who came up with the idea back in January, are all over the place.