It's a wonderful day. In preparation for the 2016 National Football League draft that starts tonight at 8 p.m./7 Central, we step back from the drama of the presidential campaign and get ready for the drama of which young men will become instant millionaires. 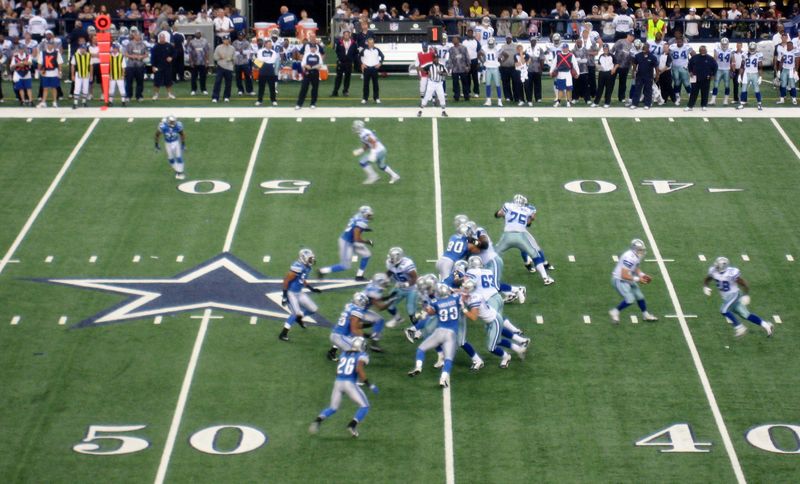 I'm a Dallas Cowboys fan, so the draft fascination for me is what crazy move owner Jerry Jones might make. (Photo by Kay Bell; Cowboys vs. Lions, Nov. 21, 2010, at Jerry World)

As ESPN senior writer Mike Sando notes, "Like its predecessors, the 2016 NFL draft has proved to be unpredictable and, come Thursday night, will crush even the best of prognostications. That is one of the few draft predictions worth taking to the bank."

The other thing you can take to the bank today is that the NFL draft is also the unofficial kickoff of the fantasy football season.

And with that comes the persistent question as to whether fantasy sports, especially the daily versions, are gambling or just good clean sports fun. That distinction is bedeviling state lawmakers, law enforcement officers, sports leagues and sports fans nationwide.

The NFL-state fantasy divide: The NFL itself is part of the growing involvement in fantasy games. Its official website is offering the general managers of online teams its take on six fantasy football sleepers in the 2016 NFL draft.

The NFL's embrace of fantasy sports runs counter to the attitudes of several states.

New York is duking it out in court with fantasy sports giants FanDuel and DraftKings. The companies have agreed to suspend paid contests in New York until an appellate court hearing in September.

Here in football mad Texas, FanDuel will stop accepting paid entries for cash prizes in the state on May 2. The agreement follows the AG's opinion in January that paid online fantasy sports contests are illegal under current Texas law. DraftKings is continuing to fight Texas' position.

Changing the law: Tennessee, however, has decided to change its law rather than fight with fantasy sports operators and their customers.

The Fantasy Sports Act (SB 2109) is now awaiting Gov. Bill Haslam's signature. Once it becomes laws, it will not only exempt fantasy sports from the state's gambling laws, but also will establish a 6 percent privilege tax on the amount of total entry fees collected from all online fantasy sports participants, minus winnings paid to contest participants.

The bill was prompted by the Tennessee AG's determination that betting on virtual line-ups of professional athletes amounted to illegal gambling.

Most of the state's lawmakers think that the law is wrong. So they changed it.

The Fantasy Sports Act sailed through the Assembly, passing the House on April 18 by a 67-17 vote and the next day easily clearing the Senate by a 27 to 2 margin.

More states could follow: Other states are considering the legalization and taxing of online sports games. Pew Charitable Trusts research reports that at least 30 states either have approved or are considering legislation to bring the fantasy games under state governance.

But while the games generate beaucoup cash -- more than $2 billion last year in entry fees, which Eilers & Krejcik Gaming LLC says could reach $14 billion by 2020 -- states that decide to condone (and tax)  the games shouldn't necessarily expect to see much of that money flow to their treasuries.

Tennessee's tax is designed to generate just enough money to pay for the two new inspectors that the law requires be hired.

And the good public relations in legalizing a popular sports outlet is priceless.

Must watch this seasons NFL