Last week, millions of last-minute filers got their returns to the Internal Revenue Service. As of April 22, the federal tax collector had 136.5 million returns in hand. 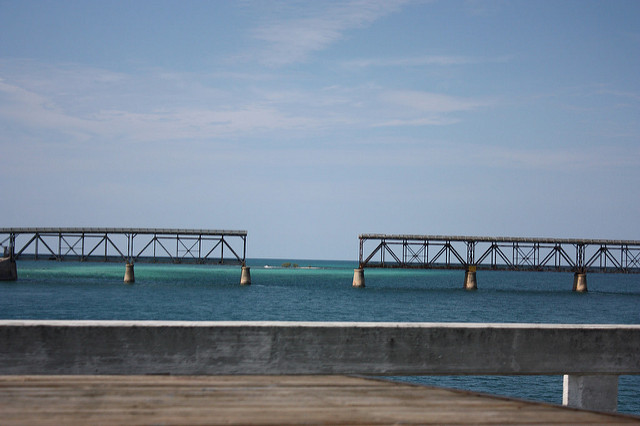 The tax gap is kind of like the break in the old Florida Keys bridge: Something's missing (Photo by Ewen Robert via Flickr CC)

The number of Americans who completed their annual tax duties by this year's April deadline(s) was slightly ahead of the 2015 filing pace. Before the year is over (and the 13+ million of us on extension get our returns in by Oct. 17), the IRS expects total filings to be close to last year's almost 151 million returns.

But all those 1040s still won't account for all the money Uncle Sam is due. That's not a surprise.

Some folks make mistakes on their returns that account for inaccurate, and low, tax payments. Others downright cheat.

The difference, for whatever reason, between the amount of tax that taxpayers should pay and the amount that they actually pay voluntarily and on time is known as the tax gap.

And the gap has grown.

The good news, though, is that the IRS' enforcement efforts and taxpayer late payments eventually brought in an additional $52 billion, narrowing the latest tax gap amount to $406 billion per year.

IRS Commissioner John Koskinen's April 28 announcement of tax gap numbers was the first update in 10 years of the estimate of how much tax money goes uncollected each year.

Reasons for the gap: So why are more of us -- and by us, I of course am not talking about any readers of the ol' blog; I know all y'all are diligent and honest taxpayers -- stiffing the U.S. Treasury more than we did a decade ago?

During the years used to calculate the latest tax gap, the economy was in the depths of recession. People either didn't have the money to pay taxes and/or were doing any and everything they could to hang onto every possible penny.

There's disgruntlement with government in general. For most folks, their most direct contact with the federal apparatus is via the IRS. The most tempting and easiest way to express that hate is by trying to keep the agency from getting what's due.

And then there's the reduction in tax audits.

As the IRS noted, it's examiners in the past have been able to wheedle billions more out of taxpayers. But, as the commish tells Congress every chance he gets, budget cuts have meant cuts in IRS audits. Apparently, without the threat of an IRS agent asking questions, a lot of taxpayers will take their cheating chances.

Compliance rate about the same: The new numbers do offer the IRS and Treasury some good news.

While the real dollars that Uncle Sam is missing out on has gone up, the individual taxpayer compliance rate is about the same.

The IRS says that that filings are doing what it asks when it comes to annual filing at an estimated at 81.7 percent rate. That's down from the prior estimated rate of 83.1 percent.

But after accounting for even reduced enforcement and late payments, the IRS says the current net taxpayer compliance rate actually has inched up to 83.7 percent.

That's a lot of numbers the IRS released last week, but when it comes to awarding the latest By the Numbers weekly crown, I'm going with the new and higher annual tax gap amount of $458 billion.

Where those tax dollars go: Tax collections also were a topic last week at my other tax blog. Over there at Bankrate, I looked at just where our tax dollars are spent.

You can get the dollar details at the post, but here's a preview. Most of our annual tax payments go each year to fund Social Security, Medicare and defense spending.

Also at Bankrate Taxes Blog last week, I looked at a scam connected to how we pay our tax bills.

Crooks are getting very creative with their variations of persistent telephone trickery, most recently trying to con targeted victims into sending fake tax payments on iTunes gift cards.

I usually post my additional tax thoughts at Bankrate on Tuesdays and Thursdays and then highlight those posts here the following weekend. Thanks for reading at either or both blogs!